Earth is home to some spectacular natural vistas – dense forest, raging rivers and rugged mountains are sights we are all familiar with. But there are a few places that you may be surprised that you can even visit on this planet. Here are some landscapes from around the world that you won’t believe exist. 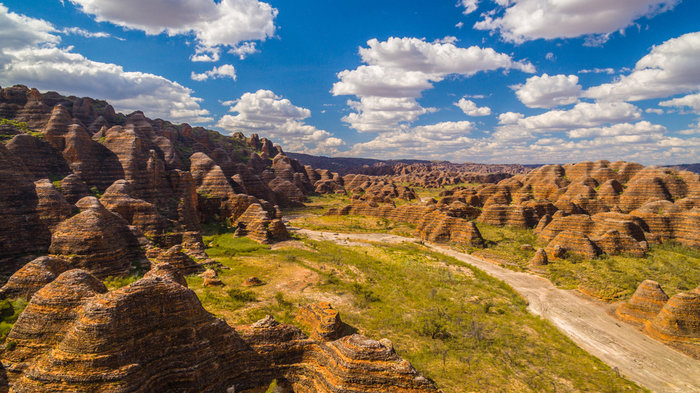 This expansive salt flat covers over 4,000 square miles high in the Bolivian Andes. Formed by the slow growth, reduction, and disappearance of many different lakes over the last 50,000 years, Salar de Uyuni is like no place on Earth. While the unending plain of snow-white salt is something to see on its own, the real show begins after a rain has passed over and transforms Salar de Uyuni into the world’s largest mirror.

The largest freshwater lake in the world, Lake Baikal holds more water than all the Great Lakes combined. But it becomes much more than just a massive lake during the winter, when the lake freezes over for five months. The frozen water is so clear that you can see almost 150 feet below the surface. In March, as temperatures begin to rise, the icy crust begins to crack, and ice shards are pushed above the surface. Sunlight streams though the blocks of ice and shines in an unearthly shade of turquoise.

There are over 300 limestone caves in the Waitamo region of New Zealand. One has been capturing the imagination of visitors for generations – the Waitamo Glowworm caves. The roof of this cave is home to a massive population of Arancamoa Luminosa, glow worms that bathe the cave in pale greenish blue light as visitors glide across the shallow waters of the cave.

This flat-top mountain sits at the intersection of Venezuela, Brazil, and Guyana. It has inspired both the native South Americans and visitors to the region for centuries. Somewhat more recently, the unique landscape served as Sir Arthur Conan Doyle’s inspiration for his novel, The Lost World.

In the novel, Sir Doyle imagines a world apart from the rest of the planet, cut off and inaccessible, still inhabited by dinosaurs and other creatures from bygone eras. If you have a chance to see Mount Roraima’s flat, 12-square mile summit towering above the clouds, surrounded by cliffs over 1,000 feet high, you’ll understand how Sir Doyle envisioned a world where life could continue undisturbed.

Deep within the Wulingyuan scenic area of China’s Hunan province lies the Zhangjiajie National Forest Park. Abundant greenery hides the true star of the park – freestanding pillar formations that were carved out over centuries of physical erosion. These pillars also served as the inspiration for a famous science-fiction setting: the alien jungle of James Cameron’s film Avatar. It was modeled after the Zhangjiajie forest.

The Zhangye National Geopark consists of natural rock formations with fabulous bands of color streaked through them. The formations are the result of more than 20 million years of sandstone and other minerals depositing in the area. The deposits were then twisted to their current angle by steady tectonic movements, which give them the striking appearance they have today.

Valley of the Ten Peaks, Canada

High in Canada’s Banff National Park lies Moraine Lake, an Alpine destination where crystal-clear waters are bordered by a tall evergreen forest, which is in turn dwarfed by ten imposing peaks, all of which are over 10,000 feet. The lake can be easily reached by road, which means you can visit one of the most awe-inspiring destinations in North American with little more than a long drive.