The State Administration of Press, Publications, Radio, Film and Television recently issued a document strengthening the regulation of video and audio programs on social media platforms, such as Weibo and WeChat, it said in a statement yesterday.

If organizations and individuals operating online streaming services on Weibo or WeChat without licenses, the social platforms would be held responsible.

Platforms must monitor content to ensure it meets the “various requirements for managing video and audio programs,” the regulator said, adding that the content cannot exceed the license conditions.

Online platforms are also prohibited from offering access to Weibo or WeChat accounts that defy regulations. 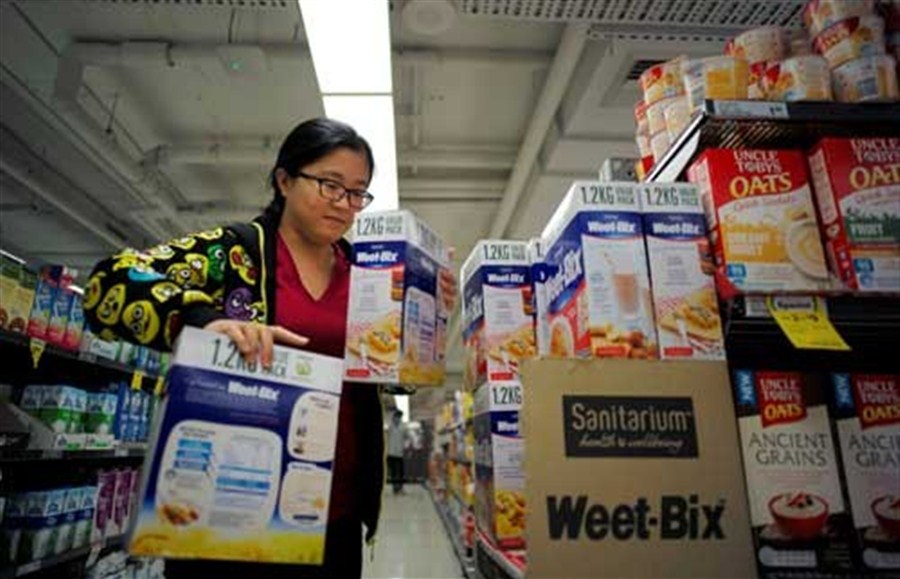 Wang, 33, is one of up to 40,000 Chinese ‘Daigou’ in Australia, retail consultants say, using social media and mobile payment apps to buy goods to order for mainland China customers. While Daigou first made waves in the West shipping luxuries from Europe like Gucci handbags, the new Australia breed deals in ‘white gold’ — baby milk formula — and other consumer staples.

More affluent, health-conscious Chinese shoppers want safe Australian goods, a trend stoked by tainted China food supply scandals. This year, brands like formula maker A2 Milk have begun exploring ways to harness the growth of Daigou, rather than compete with them, targeting cross-border e-commerce that’s seen by consultancy ThinkChina at US$1 trillion this year.

“People in China just love Australian products,” said Wang, boxing up an order of Maca Plus, a powder said to boost libido, and detox treatment Fatblaster Coconut. “They like the quality,” said Wang, an economics graduate from Shandong province still studying English as she looks for a job. “Nothing is expensive for them.”

It’s not all plain sailing for Daigou, back home or in Australia. In April, Beijing tightened rules on cross-border online shopping, though in Australia shoppers like Wang say orders haven’t been hit.

Meanwhile, at the height of a 2015 boom in demand for milk formula from China, triggered by a food safety scandal, Daigou attracted criticism in some Australian media for vacuuming up supply and leaving domestic shoppers empty-handed.

But the scale of the new trade has alerted retail brands to potential new sales via Daigou tie-ups that might otherwise be beyond the reach of mid-tier consumer goods makers.

“Everyone’s working on it (Daigou tie-ups) now, including all the big brands,” said Benjamin Sun, director at ThinkChina. “If you think about global markets, what Australia can offer to Chinese online consumers is food, supplement and dairy, not so much fashion and luxury goods.”

Some, like Wang, even broadcast their shopping live via WeChat’s video service to show buyers the products are genuinely from stores in Australia, not counterfeit Chinese goods.

Wang and her Daigou competitors typically charge premiums of about 50 percent above the sticker price on Australian store shelves. But even allowing for shipping fees, that still means the buyer pays much less for the same product in a Chinese store — assuming it is available.

A bottle of 200 capsules of Blackmores Ltd’s Fish Oil is available in Chinese stores at three times the Australian retail price of A$26.50 (US$20.2). Blackmores says about 40 percent of sales came from China — both direct exports and via Daigou — but declined to comment on dealings with Daigou.

Waiting for shipments are buyers like Lu Jiwei, a thirty-something software worker from Dalian. Lu buys about once a month from three or four Daigou suppliers, stocking up on Australian dairy, wine and nutrition products.

“It’s a bit more expensive, but not too much more to buy throughDaigou versus buying Chinese products,” said Lu.

“Mainly it’s to do with food safety concerns. Food safety standards here are perhaps a bit lower, and then you’ve got the source of milk because in China it’s more likely that it will be affected by air pollution.”

The difficulty of doing business in China for smaller would-be exporters has led consultants specialising in Chinese markets to increasingly advise Australian companies to team up with Daigou.

Peter Nathan, chief executive of A2 Milk, a New Zealand infant formula maker that also produces in Australia, said the firm was looking at ways to work more closely with Daigou.

“We think Daigou are good for both the local economy…and they are very good for our business,” Nathan said. “We clearly believe they are a positive force and it’s fair to say that it is something we are assessing.”

While food makers are keen, some big retailers have sought to tap the Chinese market directly themselves.

Woolworths declined to comment on sales from its Tmall store, or on competition from Daigou.

But for agent shoppers like Wang, the Daigou business is in Australia to stay.

“I’ll continue to do this even after I find a job,” Wang said. “Lots of money, good profits.”