Putin’s aggression in Europe should worry the US

Russia: The biggest issue for the next US president?

Russia: The biggest issue for the next US president? 00:40

Gen. Sir Richard Shirreff is a senior British army officer and former deputy supreme allied commander Europe. The opinions expressed in this commentary are solely those of the author.

(CNN)Since the formation of NATO in 1949 the defense of Europe and the free world has depended on the absolute certainty that whatever president is occupying the White House, the United States will come to the aid of a NATO member if attacked. Any doubt about the American commitment, and the credibility of NATO’s doctrine of collective defense, is holed below the waterline.

At a time when the West faces a greater threat from a resurgent Russia since the most dangerous crises of the Cold War, NATO, more than ever, needs to stand strong, united and credible.
Russia’s invasion of Crimea and Ukraine in 2014 may have already lit the fuse that could lead to the unthinkable: nuclear war with Russia in Europe.
Consider the words and actions of President Vladimir Putin, who has described the breakup of the Soviet Union as the “greatest geo-strategic tragedy of the 20th century.” In his speech on March 18, 2014, the day Crimea was admitted into the Russian Federation, Putin majored on the threat the West posed to Russia by its continued encirclement and warned about the possibility of push back: “If you compress the spring to its limit, it will snap back hard: something you should remember,” while claiming the right to protect the interests of Russian speakers everywhere, “even if it will worsen our relations with some states.” 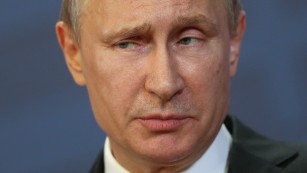 Who are Putin’s allies?01:40
Overnight, Putin became NATO’s strategic adversary, starting a dynamic that could lead to a clash with NATO over the Baltic states of Latvia, Lithuania and Estonia (which have significant Russian-speaking minorities).
Two years on and the threat is even greater. Indeed, the ratchet of tension clicks tighter on an almost weekly basis: Even this week we wake up to news of Russia sailing warships near the British coast in “a show of force and a show of capabilities,” according to Peter Felstead, editor of Jane’s Defence Weekly.
Unprecedented levels of military activity on the borders and in the airspace of the Baltic states, Finland and Sweden have been matched by the rapid buildup of military forces in Russia’s Western Military District on the borders of NATO.
For example, in January, Russia announced the formation and deployment of three motor rifle divisions, about 60,000 troops, along the Russian frontier with the Baltic states. And the Russians have kept themselves busy with regular so-called snap exercises to test the readiness of their military, at least one of which was based on a scenario of invasion and occupation of the Baltic states.
Putin’s strategic aim is clear: to re-establish Russia’s status as one of the world’s great powers and to dominate the former republics of the Soviet Union — imperialist intentions that might have been acceptable to great powers in the 19th century but which are an affront in 2016. If the opportunity presents itself, he may well activate long-held plans to march into the Baltic states. 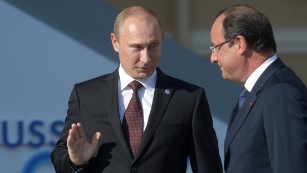 Russian relations with the West at new low 02:29
To paraphrase British Prime Minister Neville Chamberlain’s 1938 comment on Czechoslovakia, why are events in these faraway countries of which we may know little important to Americans?
First, because if Russia puts one soldier across the borders of the Baltic states it means war with NATO.
Latvia, Estonia and Lithuania have been members of NATO since 2004 and are therefore protected underArticle 5 of the Washington Treaty, the founding document of NATO, which states that an attack on one is an attack on all. A Russian attack on the Baltic states puts America at war with Russia — meaning nuclear war, because Russia integrates nuclear weapons into every aspect of its military doctrine.
And don’t think Russia would limit itself to the use of tactical nuclear weapons in Europe. Any form of nuclear release by the Russians would almost certainly precipitate nuclear retaliation by the United States, and the dreadful reality of mutually assured destruction and the end of life as we know it would follow.
Indeed, Russia is at war with America already. Russian hacking of Democratic Party email servers and, if confirmed, WikiLeaks publicizing of Clinton campaign emails to discredit the Democrats and propel Donald Trump — arguably what Putin would classify as a “useful idiot” into the White House — is classic Maskirovka — deception, aimed at undermining the intelligence and integrity of the enemy in a way that remains below the threshold of conventional warfare. In the words of Dmitri Trenin of the Carnegie Moscow Center, and a man with close connections to the Putin regime, the Kremlin has been at war since 2014. 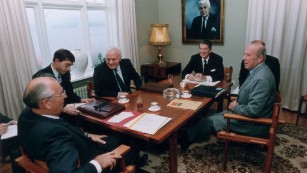 The Iceland Summit that helped end the Cold War 00:59
But although the clock may be ticking close to midnight, it is not too late. Maintenance of the peace we have enjoyed in Western Europe for nearly 70 years depends on effective deterrence. The bar of risk must be raised too high for Russia to consider any opportunistic move into the Baltic states. This requires forward basing of a credible military capability in the Baltic states and eastern Poland (rather than the token presence agreed at the NATO Warsaw Summit in July).
NATO reserves able to move quickly and effectively to bolster defenses in the Baltics will send a powerful message. It also requires Canada and European members of NATO to recognize that military capabilities lost from cumulative disarmament over the past two decades must be regenerated. This means increasing defense spending, almost certainly above the 2% of gross domestic product agreed — but often not acted upon — by NATO members (less the United States, UK, Estonia and Greece).
2017 is 100th anniversary of the first occasion the United States intervened in one of Europe’s wars. The region’s security is a matter of American security, and it means continued and close engagement in Europe and a continuation of the strong leadership that America has given NATO from the start.

(THIS ARTICLE IS COURTESY OF NEWSWEEK)

Ukraine and Poland’s parliaments have approved a resolution, considering moves by both the Soviet Union and Nazi Germany as the reason for the start of World War II.

The resolution, called the Declaration of Remembrance and Solidarity, states that the non-aggression pact between the Soviet Union and Nazi Germany was what led to the two militaries invading Poland and then the Baltics.

“We point to the fact that the Ribbentrop-Molotov pact, signed August 23, 1939, struck between the two totalitarian regimes—the Communist Soviet Union and Nazi Germany—led to the ignition of World War II, prompted by German aggression, which the Soviet Union adopted on 17 September,” the document reads.

People dressed in Red Army uniforms wave Russian and Soviet flags during celebrations to mark Victory Day, at the Soviet War Memorial in Treptower Park in Berlin, Germany, May 9, 2015. In Russia, the Soviet campaign against Nazi Germany is a pact of much pride, but its neighbors also remember Moscow’s initial pact with Berlin.FABRIZIO BENSCH/REUTERS

The German invasion of Poland caused Warsaw’s Western allies to formally declare war on Germany, with little practical support for Poland. When Polish forces retreated to the southeast they found themselves in a pincer, as the Soviet Union unexpectedly entered eastern Poland, effectively splitting the country’s territory between Berlin and Moscow’s control.

The document also blames “the weakness of the international reaction to the escalation in totalitarian and chauvinistic ideologies ahead of World War II” as being what “encouraged the Communist and Nazi regimes”.

The resolution is symbolically significant in Ukraine, as it not only highlights Moscow’s once-secret pact with the Nazis, but also refers to World War II in the Western style, as opposed to “the Great Fatherland War,” which is the name used by Russia and its allies.

According to Andriy Parubiy, the speaker of Ukraine’s parliament, the document has modern significance because of the Russian-backed insurgency in east Ukraine and Russia’s annexation of Ukraine’s Crimea.

“The aggressor that unleashed the war on our lands in 1939 is currently attacking Ukraine,” he said after the vote. He later wrote on his Facebook page that his own family, who lived in Poland at the start of World War II, were persecuted by Soviets and helped by Poles.

The declaration has caused a stir in Moscow, where the the Soviet Union’s early deal with the Nazis is still seldom mentioned, though the ultimate Soviet triumph over Nazi Germany is a sense of great national pride.

The museum’s director noted that the Soviet Union’s Red Army was instrumental in pushing the Nazis back from eastern Europe and said Western allies also struck a peace deal with the Nazi regime first, during the Nazi incursion into Czechoslovakia. However, she failed to mention that, unlike the pact with Moscow, the Western accord was never a secret and also involved no agreement to part Czechoslovak territory among Western states, as Moscow did with Poland.

The declaration prompted some criticism in Poland among the 44 lawmakers that voted against it as it contained to mention of the Volyn massacre , Polish news magazine Rzeczpospolita reports. The killing of as many as 60,000 Polish civilians between 1943 and 1945 by Ukrainian nationalist groups is one of the biggest historical sticking points between Ukraine and Poland. Some 20,000 Ukrainians were killed in revenge attacks.

Lithuania was also set to vote on the resolution, alongside Poland and Ukrainian. However, this vote will likely be carried out in December.