Four people were dead after a UPS truck was commandeered following an attempted armed robbery on South Florida’s glitzy Miracle Mile, leading police on a two-county rush-hour chase that ended in a hail of gunfire, authorities said.

Two people suspected to have been the robbers, the UPS driver and an uninvolved nearby motorist were killed 20 miles away after the nationally televised freeway pursuit, said George Piro, special agent in charge of the FBI’s Miami field office. Two other people were also killed, he said.

The incident began in Miami-Dade County at about 4:15 p.m., when two people tried to rob a jewelry store on the Miracle Mile, the downtown stretch of Coral Gables that is home to many glamorous stores and restaurants, Piro said.

The suspects exchanged gunfire with a jewelry shop worker, who was being treated for undisclosed injuries, Coral Gables Police Chief Ed Hudak Jr. said. At least one bullet hit a window at City Hall, where no injuries were reported, he said.

The robbers then hijacked a nearby UPS truck, abducting its driver, Hudak said. Alerted by a silent alarm that had been triggered in the jewelry store, a fleet of law enforcement vehicles gave chase in a pursuit that was broadcast across the country.

The chase was “terminated” 20 miles away in Miramar in Broward County, Hudak said.

News helicopter video appeared to show a person falling out of the truck after several shots were fired.

UPS said it was “deeply saddened to learn a UPS service provider was a victim of this senseless act of violence.”

Hudak said: “This is what dangerous people do to get away, and this is what people will do to avoid capture.”

“In matters like this, it is just difficult for all of us, not just in law enforcement but also in society,” he said.

The FBI and the federal Bureau of Alcohol, Tobacco, Firearms and Explosives joined state and local police in investigating.

An $846,000 Inheritance Got Lost In Transit. That Was In February

It has been more than nine months since a family in Canada realized that UPS lost a bank draft worth $846,000 (Canadian) that was sent to an inheritor. So far, the only money recovered is the $32 it cost to ship the document. The family’s bank, TD Canada Trust, has delayed issuing a new bank draft.

Lorette Taylor, who lives in Ontario, was distributing the proceeds from her late father’s estate when she tried to send an inheritance to her brother, Louis Paul Hebert, who lives near Cornwall, Ontario, some 270 miles from the office of the family’s lawyer.

NEW: Statement from TD Canada Trust: “It’s clear to us we didn’t get this right along the way and that there was more we could have done to come to a resolution faster.”

What happens when UPS loses your parcel? Well, this family is out more than $800K

An Ontario family is locked in a lengthy, three-way David vs. Goliaths battle after courier company UPS lost a bank draft worth more than $846,000 and TD Canada Trust — the bank that issued it —

Their story ran on the CBC on Thursday — and within hours, reporter John Lancaster says in a tweet, TD Canada Trust issued a statement on Thursday that read, “It’s clear to us we didn’t get this right along the way and that there was more we could have done to come to a resolution faster.”

Taylor told the CBC that she and her husband, John, went to their longtime bank, TD Canada Trust, hoping to get a certified check for $846,000 Canadian — around $660,000 in U.S. dollars, at today’s exchange rate. But TD employees had a different idea. As Taylor said, given the large sum, “They said a bank draft was more appropriate.”

Bank drafts are generally seen as being one step beyond cashier’s checks, in terms of security and guarantee. In nearly every case, they’re issued to signify that a bank has total control of the money being transferred. And in theory, at least, they’re able to be replaced or reimbursed if an initial draft is lost or destroyed. 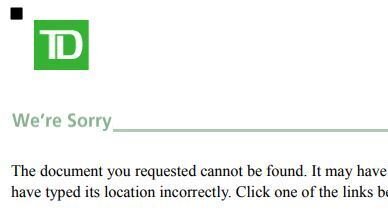 An mage taken from a TD Canada Trust error messagethat NPR received when trying to read about how the institution handles bank drafts.

We can’t get more specific about how TD’s Canada operation handles bank drafts, because when we clicked a link in this statement on its site to “find out more information about purchasing a draft,” the site returned a page stating, seemingly without ironic intent, “The document you requested cannot be found.”

The Taylors’ bank draft never made it to Cornwall. UPS says it was able to track it to Concord, north of Toronto. But after that, the shipping company says, the trail turns cold. In February, TD Bank said the draft could be canceled — but only if the Taylors signed an indemnity agreement.

“Essentially, the bank wanted to hold Lorette — the executor of her father’s estate — liable for life if the draft was cashed illegally,” the CBC reports. Under the terms, the liability would extend to Lorette’s spouse and heirs.

Lorette Taylor eventually signed that agreement; the bank still did not produce the funds. TD officials told the Taylors that they would need to secure the balance of the draft further, by taking a lien on their home. To that, they refused.

“If the bank really wants indemnity,” she said in explaining her thinking to the CBC, “then UPS should sign it.”

There may now be new hope of a deal being reached, particularly as TD Canada Trust has issued a new statement as the story has won a wide audience in Canada and beyond.

But Hebert, 61, who went to the UPS store to await his hefty check back in February, is still waiting.

“TD has the money” he told the CBC. “The money is actually sitting in an account with TD. Nothing has been stolen. It’s there. That’s my inheritance.”

Every day, Hebert said, he kicks himself for not simply driving to pick up the bank draft.

Discussing the difference the money could have made, he said, “I would have been retired.”

(THIS ARTICLE IS COURTESY OF REAGAN REPORTS WEB SITE)