Kansas towns pick up after a twister hits, and millions of people could see severe weather this afternoon

(CNN)Parts of Kansas and Pennsylvania are recovering from another terrifying evening of tornadoes — the 13th consecutive day that twisters have struck the US — and millions of people still are at risk of more severe weather on Wednesday.

A massive, rain-wrapped tornado ripped by Linwood, Kansas, outside Kansas City on Tuesday evening, and dozens of homes on Linwood’s outskirts are “all gone,” Mayor Brian Christenson told CNN.
View image on Twitter 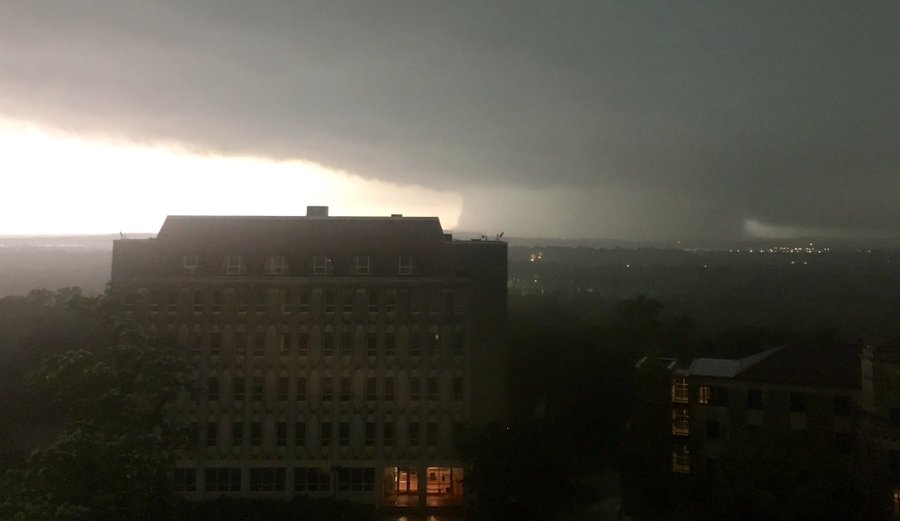 My photo of the tornado as it moved south of Lawrence, Kansas this evening, shot at 6:17 pm while I looking south out of the 6th floor of Fraser Hall on the campus of the University of Kansas.

455 people are talking about this
Twitter Ads info and privacy
At least one tornado and severe storms ravaged areas there and in nearby Douglas County, Kansas, destroying stretches of homes and businesses.
Thirteen people were treated for injuries at LMH Health hospital in Lawrence, 11 of whom have been released after treatment, the hospital said. 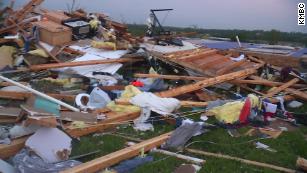 Hiding under a mattress with his family, he watched his home ‘just leave’ as a tornado churned through
The tornado near Linwood leveled Brian Hahn’s homewhile he and his family were huddled in the basement under a mattress.
“I could hear it was over us and I saw my bedroom just leave,” he told CNN affiliate KMBC. “It was gone.”
“I feel lucky I’m alive.” 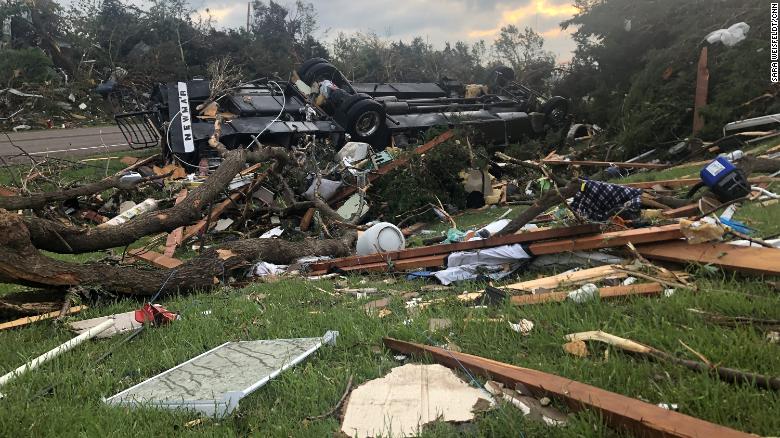 The tornado near Linwood wrecked homes and trees, and flipped this RV.
To the northeast, another tornado was confirmed by the National Weather Service in Berks County, Pennsylvania, “based on video received showing a tornado on the ground.” It moved through the area Tuesday evening.
Get the latest storm updates here
Morgantown was one of the hardest-hit areas in the county, but no one was injured there, Caernarvon Township Police Chief John Scalia told CNN affiliate KYW. 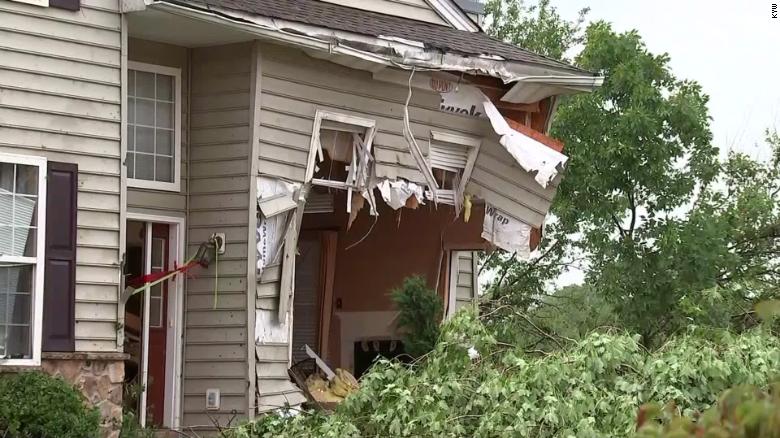 Houses near Morgantown suffered heavy damage Tuesday evening.
“When you drive around, see the destruction, you realize how lucky we are nobody was hurt,” Scalia said.
More than 37 million people are under an enhanced risk of severe weather Wednesday in two areas, according to the weather service’s Storm Prediction Center. One ranges from Texas into Illinois, and includes the cities of Dallas and St. Louis.
The other stretches from the eastern Ohio River Valley into Pennsylvania and the Mid-Atlantic coast, and includes the cities of Philadelphia, Baltimore and Washington. 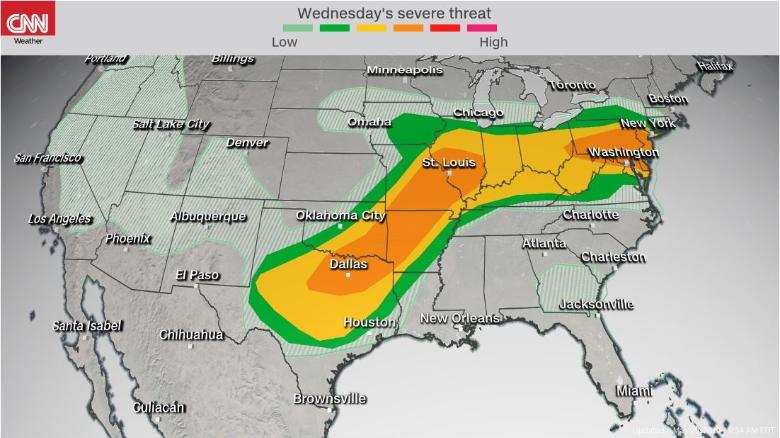 Rains this week are exacerbating flooding that has troubled parts of the central US for weeks. 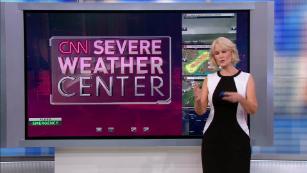 Tornadoes threaten the Plains for the 13th straight day 01:21
While flooding has occurred for days along the Arkansas River in Oklahoma, the river is now approaching record levels to the east, in Arkansas itself.
In western Arkansas near the communities of Van Buren and Fort Smith, the Arkansas River is expected to crest Wednesday afternoon at around 41 feet — roughly 3 feet above the record there.
“This is looking to be record-breaking all along the Arkansas River, and this is something we have never seen before,” Arkansas emergency management spokeswoman Melody Daniel said.
Levees along the river in Arkansas have worked so far — water has overtopped two of them, but they have not failed, Daniel said.
Daniel said more than a dozen Arkansas counties are expected to see historic flooding: Sebastian, Crawford, Logan, Johnson, Yell, Pope, Perry, Conway, Faulkner, Pulaski, Jefferson, Lincoln and Desha County.
View image on Twitter 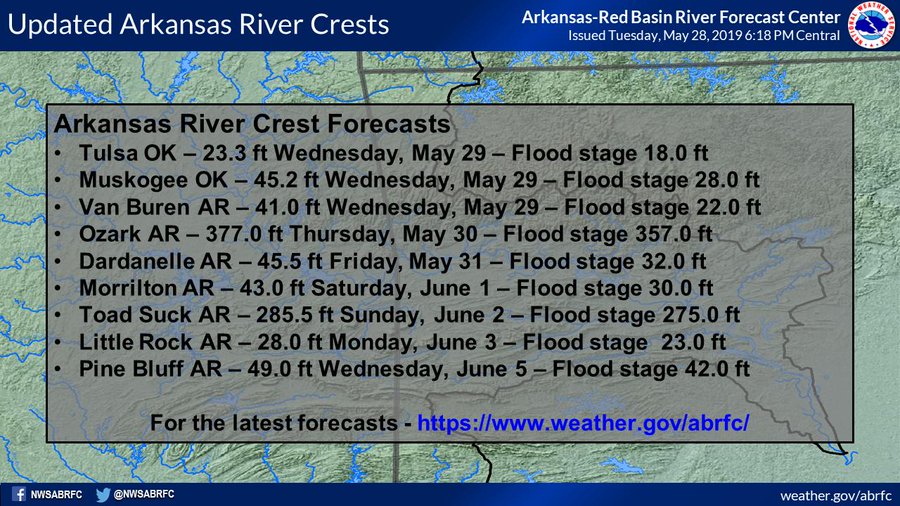 Here are our most updated forecasts for the Arkansas River from Tulsa, OK down to Pine Bluff, AR. #OKflood #ARFlood

See NWSABRFC’s other Tweets
Twitter Ads info and privacy
Officials in the central Arkansas city of North Little Rock, across the river from the state capital, believe 50 homes could soon be impacted by flooding, the city said in a Facebook post Tuesday.
“Respect all barricades and road and trail closures,” the city posted. “They are there for your protection. Do not put our emergency responders in a position that would be dangerous to you and them.”
One person was killed in Arkansas Tuesday evening after drowning in flood waters, police told CNN.
The victim, a 64-year-old man, had been driving a small Suzuki SUV, Barling police officer James Breeden said.
Authorities said the vehicle appeared to have driven into a flooded roadway that had been barricaded. A deputy sheriff saw a body floating in the water and attempted a rescue, Breeden said. The man’s body was located near Fort Chafee.
Further north, officials are warning of fast rises on the lower Des Moines River in Iowa and on the Fox River in northeastern Missouri. Both are expected to reach major flood stage — which could lead to flooding — by Wednesday.

Intentional water release has been flooding homes outside Tulsa

In western Oklahoma, the swollen Arkansas River has posed a threat to Tulsa’s levees — so the Army Corps of Engineers has intentionally been releasing water from a dam to the west in hopes that the levees aren’t overwhelmed.
Although that spilled water won’t threaten Tulsa, it is contributing to the flooding of dozens of homes in a less populated area, just outside the city of Sand Springs. 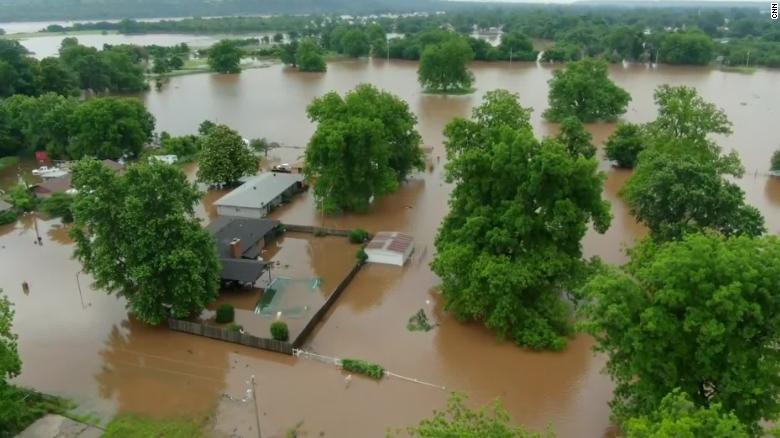 This aerial image from Tuesday shows flooding near Sand Springs, Oklahoma.
Some homes had 2 to 6 feet of water in them, residents told a CNN crew there.
Rick Sawn’s Sand Springs-area home still was dry on Wednesday morning, but water has been creeping toward it.
“I think it’s a 500-year flood and so far our dam and levees are doing what they were designed to do,” Sawn, 68, said. “There is flooding and some loss of property, and long-term recovery head of us, but without the dam system, it would have been far, far worse.”
The Army Corps of Engineers has been releasing about 275,000 cubic feet of water per second from the Keystone Dam, about 20 miles west of Tulsa — which is the equivalent of three Olympic-sized pools. Doing so will increase the strain on some of Tulsa’s levees, Tulsa Mayor G.T. Bynum said.
The Keystone reservoir has started dropping, and that could allow the Army Corps of Engineers to slow the rate of the water release by Friday, corps hydrologist David Williams said Wednesday.
Bynum has been asking Tulsa residents who live near the levees to relocate temporarily, just in case the levees don’t hold.
“There is absolutely no need to wait until the last minute when an evacuation might be necessary,” he said at a news conference Wednesday.

More than 500 tornado reports in 30 days

So far this year, there have been at least 960 tornado reports, compared to the average year total of 750.
The National Weather Service has received more than 500 tornado reports across the country in the last 30 days — an unusually high amount.
There are only four other recorded instances when more than 500 US tornadoes were observed in a 30-day period: in 2003, 2004, 2008 and 2011, according to Patrick Marsh, a meteorologist with the weather service’s Storm Prediction Center.
Tuesday was the 13th straight day of tornadoes in the US, and the 12th consecutive day with at least eight or more tornado reports, CNN’s weather team said. The month of May has brought more than 460 reports of tornadoes in 22 states across the country, with Texas, Oklahoma and Kansas making up 50% of the reports.
The jet stream played a part in the activity of the last two weeks, CNN meteorologist Chad Myers said.
“It is a stuck jet stream,” with areas of low pressure riding along it, Myers said.
The jet stream will finally shift by Thursday, and the risk for severe weather in the US will greatly diminish for at least the next week, Myers said.

Tuesday’s rain broke records in Kansas City, the National Weather Service said.
The city received 1.56 inches of rain, boosting the monthly total to 12.81 inches. The city’s previous record for May was set in 1995 at 12.75 inches.

120 people are talking about this
“This also makes this May the 3rd wettest month for ANY month in (Kansas City’s) 131-year period of record,” the weather service tweeted.