(THIS ARTICLE IS COURTESY OF THE WEATHER CHANNEL)

Hundreds of thousands in Vietnam have been forced to evacuate ahead of Tropical Storm Tembin’s arrival.

More than 160 people are dead and over 160 are missing in the Philippines due to the storm.

Tembin caused deadly flash floods and landslides in the Philippines.

It s expected to strengthen as it tracks westward.

Hundreds of thousands of residents in the Mekong Delta of Vietnam were told to evacuate Monday as deadly Tropical Storm Tembin tracks westward from the Philippines.

Officials say several hundreds of thousands fled their homes, a majority of which are made of tin sheets and wooden panels. In Vung Tau city, thousands of fishing boats were forced to halt their several-month-long trips to return to the shore.

Tembin caused more than 160 deaths and left 171 missing after it lashed the southern Philippines, triggering flash floods and landslides.

Most of the deaths from Tropical Storm Tembin were in the hard-hit provinces of Lanao del Norte and Lanao del Sur and on the Zamboanga Peninsula, according to an initial government report on storm casualties.

It’s the latest disaster to hit the Philippines, which is battered by about 20 typhoons and storms each year, making the archipelago that lies on the Pacific typhoon belt one of the world’s most disaster-prone countries.

A search and rescue operation was underway for more than 30 people swept away by flash floods in the fishing village of Anungan, Mayor Bong Edding of Zamboanga del Norte province’s Sibuco town said by phone. Five bodies have been recovered so far in the village.

The rest of the deaths were reported in Lanao del Norte, where floodwaters from a mountain also swept away several riverside houses and villagers, and Lanao del Sur, police and officials said.

Lanao del Norte officials reported the highest death toll at 64 with 139 missing followed by Zamboanga del Norte province, where officials reported at least 29 storm deaths with 19 others missing. The storm left 21 dead and one missing in the lakeside province of Lanao del Sur, according to the Department of Interior and Local Government.

More than 97,000 people remain in 261 evacuation centers across the south, while nearly 85,000 more people are displaced and staying elsewhere as of Monday.

An inter-island ferry sank off northeastern Quezon province last week after being lashed by fierce winds and big waves, leaving at least five people dead. More than 250 passengers and crewmen were rescued.

Tembin, known locally as Vinta, strengthened and picked up speed late Saturday, packing maximum sustained winds of 105 kilometers (65 miles) per hour and gusts of up to 145 kph (90 mph). It struck the southern section of western Palawan province late Saturday and is forecast to blow away from the southern Philippines on Sunday toward the South China Sea.

People gather on a bridge that was damaged by an onslaught of flooding brought about by Tropical Storm Tembin on Dec. 24, 2017, in Zamboanga Del Sur in the southern Philippines. (AP Photo/Daisy Barimbao)

The Weather Company’s primary journalistic mission is to report on breaking weather news, the environment and the importance of science to our lives. This story does not necessarily represent the position of our parent company, IBM.

MANILA — Fire crews battling an enormous blaze that tore through a shopping mall in a southern city in the Philippines, trapping at least 37 people, pulled one body from the building, the mayor said on Sunday.

But the vice mayor said there was “zero” chance of survival for the other 36.

Firefighters have been unable to enter the mall in Davao City after the fire started on Saturday morning, the vice mayor, Paolo Duterte, said.

“Our firemen are still struggling to find a way in as the fire is still burning,” Mr. Duterte said. He said of those still trapped inside, “Their chances of survival is zero.”

Mayor Inday Sara Duterte said that one body had been recovered and that rescuers’ priority was now to find all those who are missing.

“Do not stop until you find the 37,” she said, calling the mall fire “an unfortunate incident.”

The blaze erupted as city officials and emergency-relief workers were trying to rescue survivors of flash floods and landslides unleashed by Tropical Storm Tembin elsewhere in the region. The storm slammed into the eastern portion of Mindanao late Thursday, dumping torrential rains.

By Sunday, the death toll stood at 231, officials said, with scores more missing.

President Rodrigo Duterte, the father of Davao City’s mayor and vice mayor, visited the mall on Saturday night and met with family members of those inside. Photographs released by his office showed him consoling relatives and wiping tears from his eyes.

Understand the world with sharp insight and commentary on the major news stories of the week.

Sign Up
You agree to receive occasional updates and special offers for The New York Times’s products and services.
https://www.google.com/recaptcha/api2/anchor?k=6LeN0R4TAAAAACwPa5WX2QYE0npOf2-2veTOm2Tp&co=aHR0cHM6Ly93d3cubnl0aW1lcy5jb206NDQz&hl=en&v=r20171212152908&size=normal&cb=o2opbk7xmr3k

The president, who was previously mayor of Davao City and was in town for the holidays, “assured the relatives of the victims that the government would extend help,” said Harry Roque, Mr. Duterte’s spokesman.

The cause of the fire remains unknown. Officials said the blaze started near a furniture store on the building’s third floor. Many locals were doing their Christmas shopping, and employees were wrapping up their workweek before the holiday. Officials said many of the people trapped inside worked at a call center inside the mall.

More than 24 hours later, the building remained on fire and was too dangerous to enter, the authorities said.

“We are currently coordinating with the authorities,” said Thea Septaan Padua, a spokeswoman for the mall, adding that for now, no deaths had been confirmed.

The authorities have been on heightened alert amid fears that Islamist militants could target shopping malls and other public areas. In September, when the president was visiting Davao, militants who claimed allegiance to the Islamic State bombed a night market in the city, killing 15 people.

Tropical Storm Tembin hit the southern island of Mindanao in the Philippines on Friday, killing at least 75 people, authorities said.

At least 58 people have been reported missing, according to spokeswoman Mina Marasigan of the Philippines National Disaster Risk Reduction and Management Council.
More than 70,000 people have been affected by Tembin, called “Vinta” in the Philippines. At least 30,000 people were taken to shelters, Marasigan said.
Heavy rain from the storm led to the collapse of artificial dams, which prompted widespread flooding and triggered landslides in the mountains.
Most of the deaths occurred in Lanao del Norte, with additional ones in several other towns, including Payao and Lanao del Sur, the affiliate reported
close dialog

Receive Fareed Zakaria’s Global Analysis
including insights and must-reads of world news
Activate Fareed’s Briefing
By subscribing you agree to our
privacy policy. 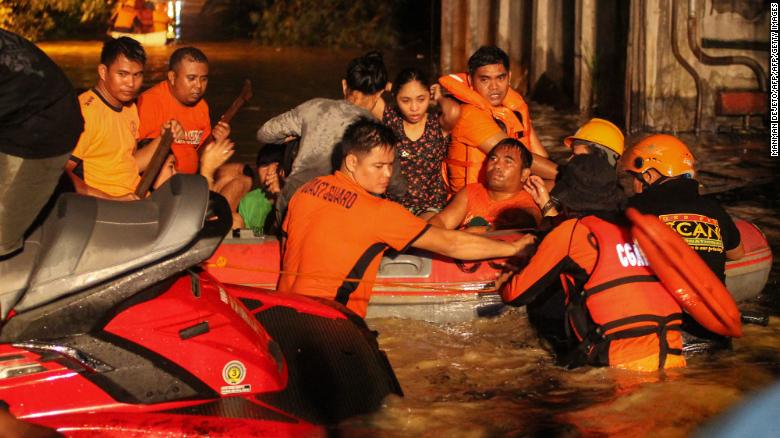 Rescue workers evacuate flood-affected residents in Davao on the southern Philippine island of Mindanao after Tropical Storm Tembin dumped torrential rains across the island.
Other fatalities included a 4-year-old who died after being trapped in a landslide in Payao and a prisoner killed when the jail’s roof collapsed due to strong winds and rains in Butuan City, CNN Philippines reported, citing the Philippine Red Cross. 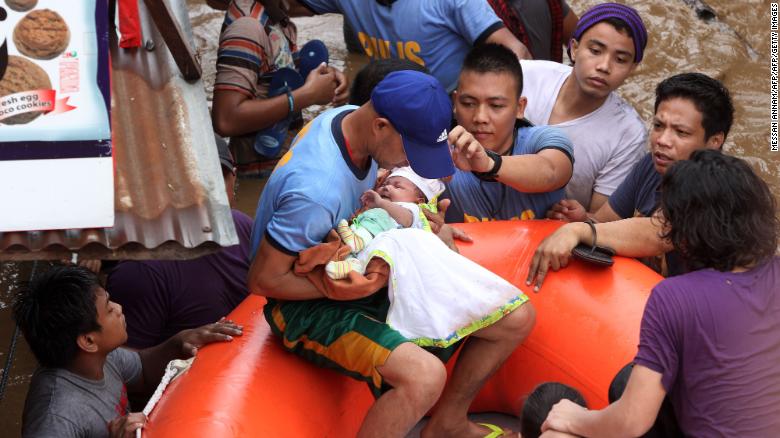 Police officers evacuate a baby in Cagayan city after Tropical Storm Tembin hit.
By Saturday morning, Tembin was packing maximum sustained winds of 80 kph (50 mph). The storm is headed toward the island province of Palawan, according to Philippine Atmospheric Geophysical Astronomical Services Administration.