China on Friday said it had taken “reciprocal” measures on US diplomats in the country.

Foreign Ministry spokesperson Hua Chunying said at a press conference that the Chinese side issued a note to the US Embassy in China on Wednesday, informing it of reciprocal measures going into immediate effect.

Hua made the remarks when asked to respond to reports that China had taken countermeasures in response to the previous restrictions imposed on Chinese diplomatic and consular officials posted in the United States.

In October, the United States ordered Chinese diplomats to notify the State Department in advance of any official meetings with US diplomats, local or municipal officials and before any visits to colleges or research institutions.

Asked to confirm reports that US diplomats in China are required to notify the Foreign Ministry five working says in advance of meetings with local officials, Hua said, the countermeasures “are reciprocal to the US State Department’s restrictive measures against Chinese diplomatic and consular officials.”

“We once again urge the US side to correct its mistake, withdraw the decision and provide support and convenience for Chinese diplomatic and consular officials posted in the United States as they fulfill their official duties,” she said.

Hua said China has always supported diplomatic and consular personnel from other countries, including the United States, in carrying out normal official duties according to law.

“We will take appropriate measures in response to US actions,” she said.

(THIS ARTICLE IS COURTESY OF THE SHANGHAI CHINA NEWS PAPER ‘SHINE’)

China makes statement on US planned measures to raise tariffs

China on Wednesday expressed regrets over the planned measures by the United States to raise tariffs on imported Chinese products, saying escalating trade frictions is against the interests of the two peoples as well as people of the world.

“China deeply regrets this, and will be forced to take necessary countermeasures if the US side puts the tariff measures into effect,” says a statement released on Wednesday.

The United States announced on Wednesday that it would raise tariffs on US$200 billion worth of Chinese goods from 10 percent to 25 percent as of May 10.

So, his views on any given issue or foreign leader are largely informed by how that person has treated Trump in their last interaction — and how much of what he wants that they are willing to give him.
That worldview is important to keep in mind as Trump travels to Canada to attend the G7 summit on Friday, a trip which he has already tried to wiggle out of, is cutting a day short and, if Twitter is any indication, is assuming will be a total and complete disaster.
“The European Union treats us very unfairly,” Trump said as he left the White House Friday morning to head to the G7. “Canada [treats us] very unfairly.”
That’s the latest in a series of increasingly frustrated and angry comments coming out of the White House over the past few days, as its become more and more clear that leaders Trump thought were his friends — French President Emmanuel Macron and Canadian Prime Minister Justin Trudeau — have pushed back on his demands, particularly on tariffs.
Trudeau and Trump had a reportedly contentious phone call late last month as the Canadian leader expressed his unhappiness with the United States imposing tariffs on its neighbor to the north for “national security reasons.”
And Trump has repeatedly antagonized Trudeau in the run-up to the G7 meeting.
“Prime Minister Trudeau is being so indignant, bringing up the relationship that the U.S. and Canada had over the many years and all sorts of other things…but he doesn’t bring up the fact that they charge us up to 300% on dairy — hurting our Farmers, killing our Agriculture!” Trump tweeted Thursday night.
He kept up that drumbeat Friday morning, tweeting: “Canada charges the U.S. a 270% tariff on Dairy Products! They didn’t tell you that, did they? Not fair to our farmers!” (It’s slightly more complicated than that.)
Even Macron, the world leader with whom Trump appeared to have the warmest relations, has come under fire from the President’s Twitter account.
“Please tell Prime Minister Trudeau and President Macron that they are charging the U.S. massive tariffs and create non-monetary barriers,” Trump tweeted. “The EU trade surplus with the U.S. is $151 Billion, and Canada keeps our farmers and others out. Look forward to seeing them tomorrow.”
That tweet came after — stop me if you’ve heard this one! — a heated phone call between Trump and Macron earlier in the week in which the French President expressed his unhappiness with Trump’s policies on immigration and trade.
Trump expected more capitulation from the likes of Trudeau and Macron because, well, they had been nice to him. They had, of course, done that out of a (mistaken) belief that praising Trump and playing to his desire to be venerated would make him more malleable to their policy wishes.
When he didn’t get the full support of Macron and Trudeau for policies that, well, they don’t support, Trump pouted. Publicly.
According to CNN’s White House team:
“Even as late as Thursday afternoon, Trump was questioning why he would attend a G7 meeting where he’s outnumbered on key issues like trade and climate change. As a series of combative tweets from Macron began emerging late in the day, Trump again raised the prospect of scrubbing all or part of his visit to Canada, asking advisers what the point of attending the summit would be, according to a person familiar with the conversations.”
This my-way-or-the-highway (or take-my-ball-and-go-home) approach is what Trump promised as a candidate for president. Past holders of the office had made terrible deals for the US — Trump would make good ones. He alone knew how to talk to world leaders to get them to do exactly what he wanted. It was all in the art of the deal.
Campaigning is easy. Governing is hard.
And it turns out that simply telling other countries to, say, pay for a border wall (and enjoy it!) or renegotiate broad and complex trade deals isn’t as easy as firing someone on a reality TV show.
That reality makes Trump mad. And when he gets angry, he tweets. Watch his Twitter feed over the next 24-48 hours.

Trump says he made up trade claims in meeting with Trudeau

Washington (CNN)President Donald Trump boasted at a private fundraiser Wednesday of making up trade claims during a meeting with Canadian Prime Minister Justin Trudeau before knowing whether they were true. 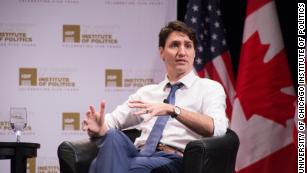 Trudeau: Canada is ‘legitimately concerned’ about NAFTA but will not take a bad deal
“Trudeau came to see me. He’s a good guy, Justin. He said, ‘No, no, we have no trade deficit with you, we have none. Donald, please,'” Trump said during a speech to donors in Missouri, according to audio obtained by The Washington Post and confirmed to CNN by an attendee. “Nice guy, good-looking guy, comes in — ‘Donald, we have no trade deficit.’ He’s very proud because everybody else, you know, we’re getting killed.”
He continued: “I said, ‘Wrong, Justin, you do.’ I didn’t even know. … I had no idea. I just said, ‘You’re wrong,'” Trump recalled. “You know why? Because we’re so stupid. … And I thought they were smart. I said, ‘You’re wrong, Justin.’ He said, ‘Nope, we have no trade deficit.’ I said, ‘Well, in that case, I feel differently,’ I said, ‘but I don’t believe it.'”
Trump said he asked an aide to check if he was correct in telling Trudeau the US runs a trade deficit with Canada.
“I sent one of our guys out, his guy, my guy, they went out, I said, ‘Check, because I can’t believe it,'” Trump said.
“‘Well, sir, you’re actually right. We have no deficit, but that doesn’t include energy and timber. … And when you do, we lose $17 billion a year.’ It’s incredible.” 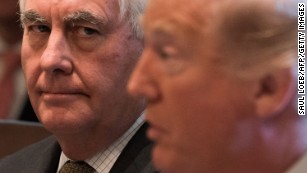 Analysis | Globalists, beware: Steve Bannon’s spirit is very much still at the White House
According to figures provided by the Commerce Department, the US ran a $2.77 billion surplus with Canada for 2017. That figure includes oil and timber. It’s unclear what Trump was referring to with the $17 billion figure.
Trump doubled down on his claim Thursday morning.
“We do have a Trade Deficit with Canada, as we do with almost all countries (some of them massive). P.M. Justin Trudeau of Canada, a very good guy, doesn’t like saying that Canada has a Surplus vs. the U.S.(negotiating), but they do…they almost all do…and that’s how I know!” he tweeted.
Trump has similarly boasted about pressing Trudeau about the US’s supposed trade imbalance with Canada before, most recently at a December rally in Pensacola, Florida. But he didn’t include the “I didn’t even know” reference, and it’s unclear whether it was an admission that he made up the claim.
Trump’s comments came during a half-hour speech to raise money for Republican Senate candidate Josh Hawley, who’s challenging Missouri Democratic Sen. Claire McCaskill. 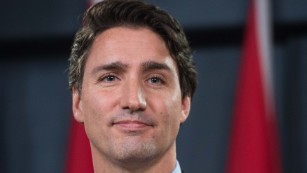 trade
Trudeau: Canada’s steel industry can breathe ‘sigh of relief’ after exemption
During the fundraiser, Trump also called the North American Free Trade Agreement a disaster and blamed the World Trade Organization for allowing other nations to box in the US on trade.
The President mocked other politicians for supporting NAFTA, attacking Mexico as “spoiled” and arguing that Canada had outsmarted the US, the Post reported.

CNN’s Chris Isidore and Kevin Liptak contributed to this report.