Cairo (CNN) Pope Francis sent a message of tolerance and co-existence Saturday in a Mass at a Cairo stadium before concluding his two-day trip to Egypt. 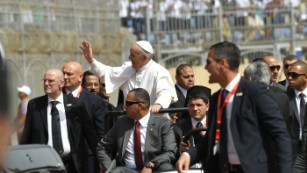 Security surrounds Pope Francis at the Air Defense Stadium in Cairo.
He waved at worshippers and stopped momentarily to bless a group of children in costume. Parts of the stadium stands were draped with his photo as well as Egyptian and Vatican flags.
“Religiosity means nothing unless it is inspired by deep faith and charity,” Francis said.
“True faith is one that makes us more charitable, more merciful, more honest and more humane,” he said.
“God is pleased only by a faith that is proclaimed by our lives, for the only fanaticism believers can have is that of charity! Any other fanaticism does not come from God and is not pleasing to him.”
The Pope started his Mass with the “As-Salaam Alaikum,” the traditional Muslim greeting in Arabic that means “Peace be upon you,” and ended it with “al-Masih qam! Bi-l-haqiqa qam! (Christ is risen! He is truly risen)”.
A Vatican spokesman said 15,000 people attended the Mass at the stadium, which holds 30,000. 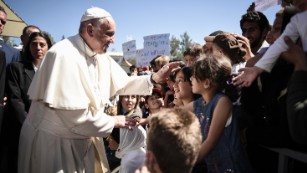 The Pope’s perilous mission to Egypt
The Pope later met with members of Egypt’s small Coptic Catholic community at St. Leo’s Patriarchal Seminary in Cairo’s Maadi neighborhood.
In a more intimate setting than his earlier Mass, Francis urged gathered priests, nuns and worshippers to be the religious builders of peace in Egypt, saying that despite “difficult circumstances, you must endure.”
“Although there are many reasons to be discouraged, and many prophets of destruction and condemnation … may you be the sowers of hope, builders of bridges and agents of dialogue and harmony,” he said.
Later Saturday, Egyptian President Abdel Fattah el-Sisi and an honor guard met the Pope at the airport in a farewell ceremony before he departed for Rome.

On Friday, Francis stressed the importance of unity between Muslims and Christians to shape world peace. 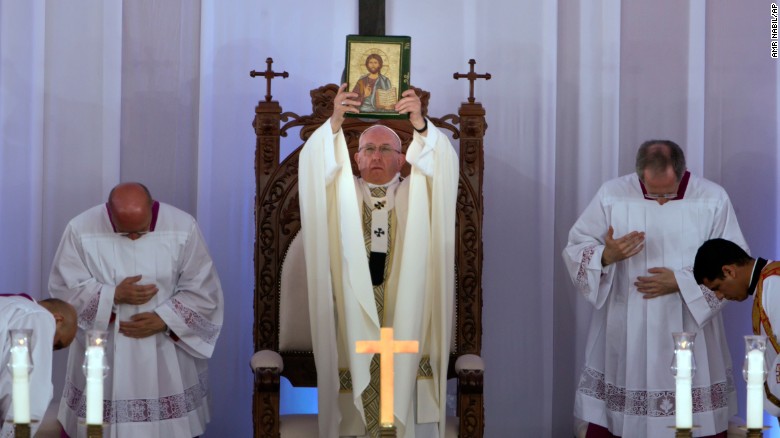 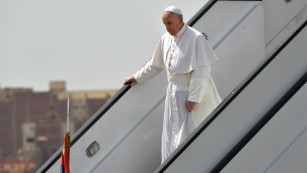 Pope Francis in Egypt: ‘No to every form of violence’
Francis opened his speech with “As-Salaam Alaikum” after the imam’s address.
“In order to prevent conflicts and build peace, it is essential that we spare no effort in eliminating situations of poverty and exploitation where extremism more easily takes root, and in blocking the flow of money and weapons destined to those who provoke violence,” he said.
Francis called for an end to the “proliferation of arms” and lambasted “demagogic forms of populism.”
“If they are produced and sold, sooner or later they will be used,” he said. “Only by bringing into the light of day the murky maneuverings that feed the cancer of war can its real causes be prevented. National leaders, institutions and the media are obliged to undertake this urgent and grave task.”
Tayeb addressed the status of faith in modern life.
“With all these accomplishments (of the 21st century), how come peace has become a lost paradise? The answer, I assume, is that modern civilization has ignored religion,” he said.
After the peace conference, Francis and the Egyptian President addressed religious and political dignitaries at Al-Masa Hotel.
The Pope, again speaking in Italian, focused on Egypt’s role in fighting terrorism, evoking events from biblical and modern history. He ceremonially greeted all Egyptian people, including minority Christians — Coptic Orthodox, Greek Byzantines, Armenian Orthodox, Protestants and Catholics.

Pope Tawadros II, head of Egypt’s Coptic Orthodox Church, then greeted Francis at St. Mark’s Coptic Orthodox Cathedral in Cairo’s Abbassiya district, state TV said. They walked together in procession and took part in ecumenical prayers at the adjacent church of St. Peter, the site of a deadly blast in December that left at least 23 people dead.
Francis commended the efforts of Tawadros II, whom he called a brother, in organizing meetings between the Coptic Orthodox and Catholic churches.
Francis and Tawadros II signed a joint, 12-point declaration reiterating the fraternity between their churches. “Let us intensify our unceasing prayer for all Christians in Egypt and throughout the whole world, and especially in the Middle East,” the declaration says.

CNN’s Joe Sterling and Susannah Cullinane contributed to this report.

(I FOUND THIS ARTICLE ON GOOGLE PLUS, I THINK IT IS AN EXCELLENT ARTICLE, HOPEFULLY YOU WILL LIKE IT ALSO)

Mughal emperor Jahangir’s death and the following succession struggle ended in the triumph of his son, Prince Khurram, who took the title Shah Jahan, which means “emperor of the world.”

He killed his male relatives and forced Jahangir’s powerful widow, Nur Jahan, to retire. He is best remembered for building the Taj Mahal, a mausoleum for his wife, Mumtaz Mahal. He was the fifth ruler of the Mughal (Mogul, Moghul) Empire and his reign marked the zenith of Mughal power and splendor.

Anticipating his father’s death, the future Shah Jahan openly rebelled in 1623 and seized power upon Jahangir’s death in 1628, putting to death all his brothers and other possible rivals. Shah Jahan was a devout orthodox Muslim. Intolerant of other faiths, he ordered the destruction of new Hindu temples and Christian churches in 1632.

In the same year, he attacked the Portuguese settlements at Hoogley and Chittagong in Bengal. Both trading outposts were far from Goa, the Portuguese viceroy’s seat, and he could send no help. Portuguese prisoners were taken to Agra and kept until 1643, when they were repatriated to Goa.

Shan Jahan also campaigned against the Shi’i ruled Muslim states in the Deccan and subdued them to vassalage. However he had to give up Kandahar in Afghanistan to the Persians in 1653 because they possessed superior artillery and guns, and he also lost control of previous Mughal holdings in Central Asia.

Shah Jahan ruled the Mughal Empire at its height and was noted for the extravagance and opulence of his court. He was famous for the buildings he commissioned, most notably the Red Fort in Delhi with its mosque and sumptuous palaces, especially for the gem encrusted Peacock Throne.

Although he had a harem of 5,000 women, he was known for his devotion to his wife, Mumtaz Mahal, whose name means “light of the palace.” She died giving birth to the last of their 14 children. He expressed his grief for her by assembling 20,000 workers, who labored for 20 years to complete her mausoleum in Agra.

Designed by Persian architects it was a synthesis of Persian Muslim and Indian styles called Indo-Islamic and remains a wonder of the world. Most of his other monuments also remain. The demands of his campaigns and projects resulted in huge tax increases that weakened the economy.

As Shah Jahan aged, his adult sons began to conspire for the throne. He kept his eldest and favorite son, Dara Shikuh, in Agra so he could begin acquiring military and administrative experience. Fearing that he was near death, his remaining three ambitious sons revolted in 1657.

They fought with one another, against their father, and against their oldest brother. Aurangzeb, the third and most ruthless, was the victor. He killed his brothers and imprisoned his aged father in an apartment in Agra fort with a view of the Taj Mahal until his death in 1666. Meanwhile Aurangzeb proclaimed himself Emperor Alamgir in 1658.