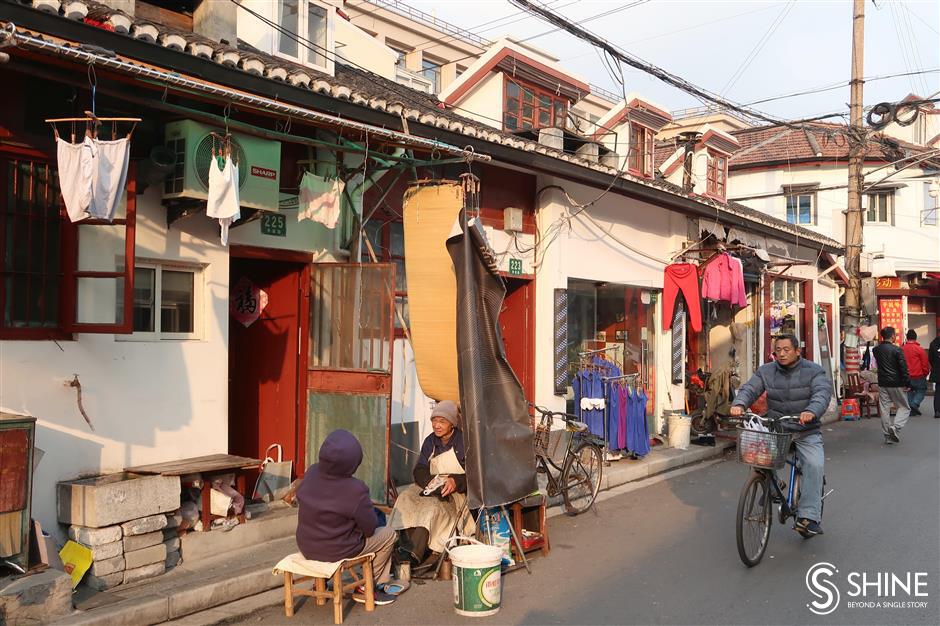 Pedestrians walk in the Qiaojia Road area on Saturday.

Over 2,400 households of residents living in Shanghai’s last remaining downtown ghetto will get relocated as most of them signed to accept the relocation deals over the weekend.

Some 92 percent of residents living in the western block of Qiaojia Road area in Huangpu District put their names on the dotted line on the first day the consultation process on Saturday.

The relocation can be begin as long as 85 percent of the residents agree. They can move to designated housing or receive cash compensation to purchase new properties on their own.

Officials with the Laoximen Subdistrict and neighborhood committees set up consultation offices to explain policies, answer question and help solve family disputes for the remaining residents who were still reluctant to leave.

Qiaojia Road is a small street in the old town, once the center of Shanghai, that covers 2 square kilometers. The road stretches for less than one kilometer. It was where Xu Guangqi (1562-1633), a scholar-bureaucrat of the Ming Dynasty, was born. His former residence is still in existence.

Painter Wang Yiting’s former residence is also on Qiaojia Road. In 1922, Wang welcomed Albert Einstein and his wife to the house. 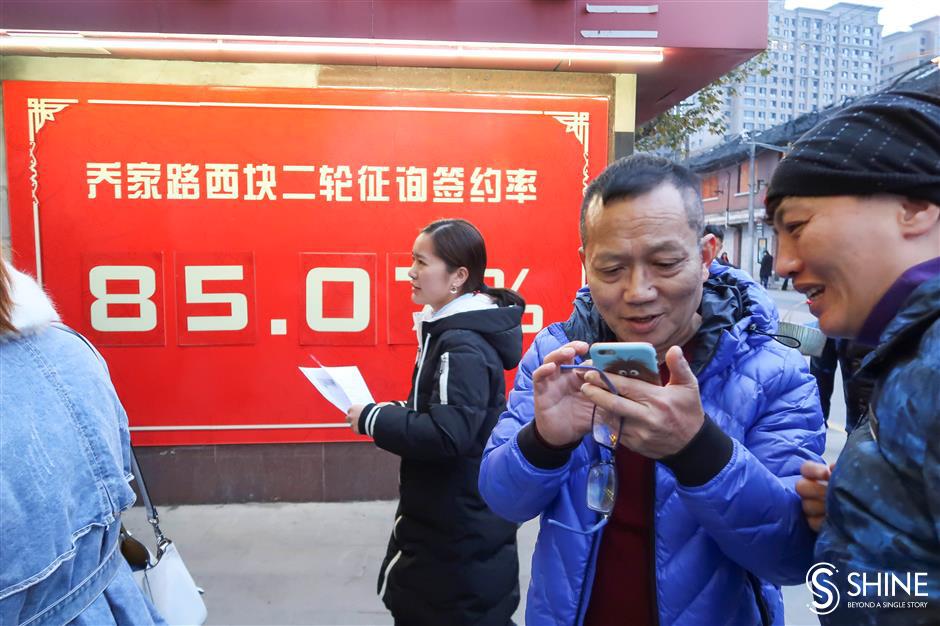 Residents check the proportion of households signing to get relocated on Qiaojia Road on Saturday. 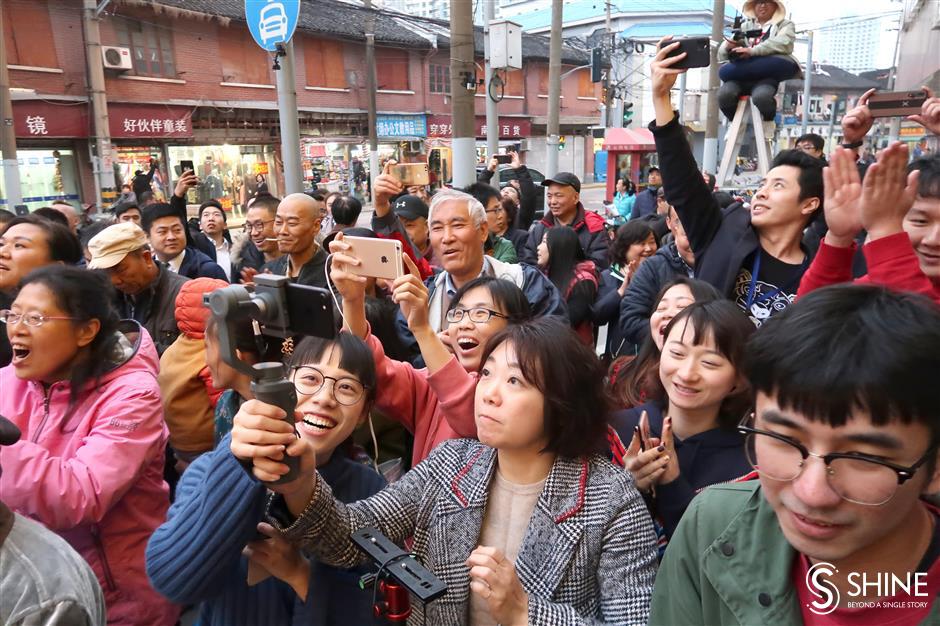 Residents celebrate when over 85 percent of households sign up to be relocated on Qiaojia Road on Saturday.

The condition of the historic buildings in the area has worsened and buildings that once housed only one family are now stuffed with five or six, sometimes more. Residents are still using chamber pots in the neighborhoods.

Huangpu has the largest amount of lane-style neighborhoods awaiting modernization, some 2 million square meters with shared bathrooms and kitchens. About 65,000 households in the downtown district are still using chamber pots.

The district government had planned to relocate or renovate 8,000 households each year until 2025.

It is part of a new round of face-lifting campaigns that have already been launched in Huangpu. They include the renovation of the former home of Shanghai Municipal Council and the city government near the Bund, the Chengxingli residential community and the Qiaojia Road Neighborhood.

As another key project, the nearly century-old former city government building is being preserved and renovated into offices, cultural and public space as well as commercial property. It will open to the public in 2023.

The Chengxingli neighborhood, a shikumen, or stone-gate community, on Beijing Road W., offers a new model for renovations in old neighborhoods. The project relocated some residents while renovating the living spaces of those who choose to remain.

Relocated families free up space for each remaining household. This space will be used for new kitchen and toilet facilities.

Climate change poses a greater threat to poor communities in developing nations like India, Indonesia and the Philippines, with people living on the margins less able to protect themselves from the impact.

Already at risk from rains, flooding and open sewers, slum-dwellers who live by the ocean in the financial capital Mumbai are vulnerable to rising seas caused by global warming and say the government should help them move to safer locations.

Thousands of people, mostly migrants from other parts of the country, live in temporary shelters, built on rocks at the edge of the sea and are likely to be the first hit from coastal flooding caused by climate change.

“Even hearing about (the rising sea levels) we feel afraid. What do we do? We have been living here for so many years. It would be good if the government could do something to help us,” said Kamakshi Tangesh Devender, who lives in a slum in Worli neighborhood.

Climate change poses a greater threat to poor communities in developing nations like India, Indonesia and the Philippines, with people living on the margins less able to protect themselves from the impact.

A research paper by Climate Central, a US.-based non-profit climate science and news organisation, found that climate change will put an estimated 300 million people globally at risk of coastal flooding by 2050.

The UN-backed Intergovernmental Panel on Climate Change said in a report in September that sea levels could rise by one meter (3.3 feet) by 2100 — 10 times the rate in the 20th century — if carbon emissions that are responsible for climate change keep climbing.

“Mumbai is going to be under water, we need to plan for that eventuality and what is required is to plan a new city to replace Mumbai as and when it gets submerged. And ideally, to my mind, it should be somewhere inland – at a pretty substantial elevation,” Debi Goenka, an environmental activist, told Reuters.

As well as changing sea levels, scientists say climate change is causing an increase in extreme weather events around the world such as drought and floods.

Mumbai has been hit this year by incessant rains and flooding, causing loss of life and property and halting essential services like local transport. The city received 66% more rainfall than average during the June to September monsoon season, breaking a record set in 1954.

Governments are meeting at a U.N. summit on climate change in Madrid on Dec. 2-13.