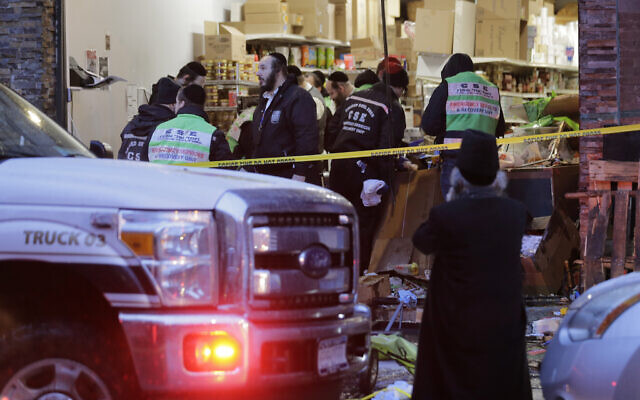 Emergency responders work at a kosher supermarket, the site of a shooting in Jersey City, N.J., Wednesday, December 11, 2019. (AP/Seth Wenig)

One of the suspected gunmen in the deadly Jersey City shooting at a kosher supermarket on Tuesday railed against Jews and police officers on social media, according to a report Wednesday, as authorities indicated that the store had been targeted in the deadly incident.

A law enforcement official said police believe the shooter was motivated by the anti-Semitic and anti-police beliefs, The New York Times reported on Wednesday.

Details of the online posts were not provided in the article.

The two suspects, who were both killed in a shootout with police, were identified as David Anderson and Francine Graham, NBC New York quoted law enforcement sources saying.

Officials said a religious note was found in the vehicle allegedly used by Anderson and Graham but that they were still investigating a motive.

A neighbor of Graham’s in Jersey City told NBC she was formerly a home health aide in Manhattan who met Anderson after getting hurt and quitting her job. The neighbor said Graham became a “dark” person after meeting Anderson.

A police officer and three bystanders were killed in the violence, as were the two suspects, Tuesday afternoon in Jersey City, just across the Hudson River from New York City. Two of the bystanders have been identified by local community members as Leah Mindel Ferencz, 33, and Moshe Deutsch, 24, both members of the local ultra-Orthodox community.

The 40-year-old slain officer, Detective Joseph Seals, who led the department in the number of illegal guns removed from the streets in recent years, was cut down by gunfire that erupted near a cemetery. The gunmen then drove a stolen rental van to another part of the city and engaged police in a lengthy shootout from inside the kosher market, where the five other bodies were later found. 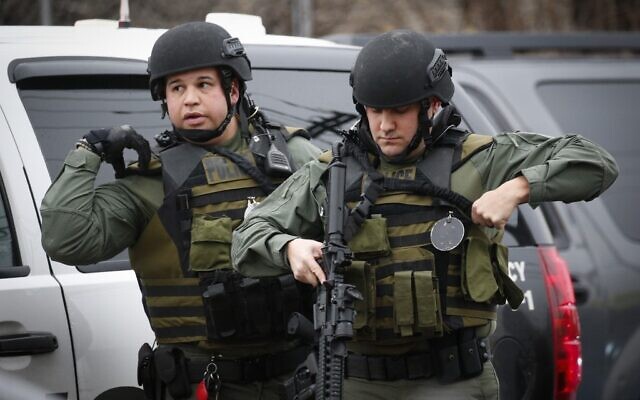 Police officers arrive at the scene of an active shooting in Jersey City, New Jersey, on December 10, 2019. (Kena Betancur / AFP)

Local officials earlier on Wednesday said they believe the Jewish-owned supermarket was targeted, but stopped short of laying out an anti-Semitic motive. Neither the state attorney general, who is running the investigation, nor any other law enforcement authority has confirmed the shooters targeted Jews.

“Based on our initial investigation (which is ongoing) we now believe the active shooters targeted the location they attacked,” Jersey City Mayor Steven Fulop said.

Fulop did not elaborate on why authorities now believe the market was targeted.

Based on our initial investigation (which is ongoing) we now believe the active shooters targeted the location they attacked. Due to an excess of caution the community may see additional police resources in the days/weeks ahead. We have no indication there are any further threats

839 people are talking about this

Fulop said that there were no signs of further threats, although earlier reports had said a third gunman may have escaped the scene, and said he had been in close contact with Jersey City’s Jewish community following the attack.

“I know the entire Jersey City community stands together with the Jewish Community during these challenging times,” Fulop said.

Next to the store, the only kosher supermarket in the area and a central fixture for the growing community, are a yeshiva and a synagogue. Around 100 Jewish families live in the area in the city’s Greenville neighborhood, with most of the families having moved there from Brooklyn in the last few years.

Chabad Rabbi Moshe Schapiro, who shops at the store and attends the synagogue next door, said he spoke with the store owner, Moishe Ferencz, before Ferencz learned that his wife had been killed in the attack.

“He told me he had just walked out of the store into the synagogue not five feet away just before this happened, and then he couldn’t get back for hours,” Schapiro said. “His wife was inside the store. He said, ‘I hope my wife is safe.’”

Seals was credited by his superiors with having led the department in the number of illegal guns removed from the streets in recent years, and might have been trying to stop an incident involving such weapons when he was cut down by gunfire that erupted near the cemetery, authorities said.

The bullets started flying early in the afternoon in the city of about 270,000 people, situated across the Hudson River from New York City. Seals, who worked for a unit called Cease Fire, was shot around 12:30 p.m. The gunmen then drove a stolen rental van to another part of the city and engaged police in a lengthy shootout. 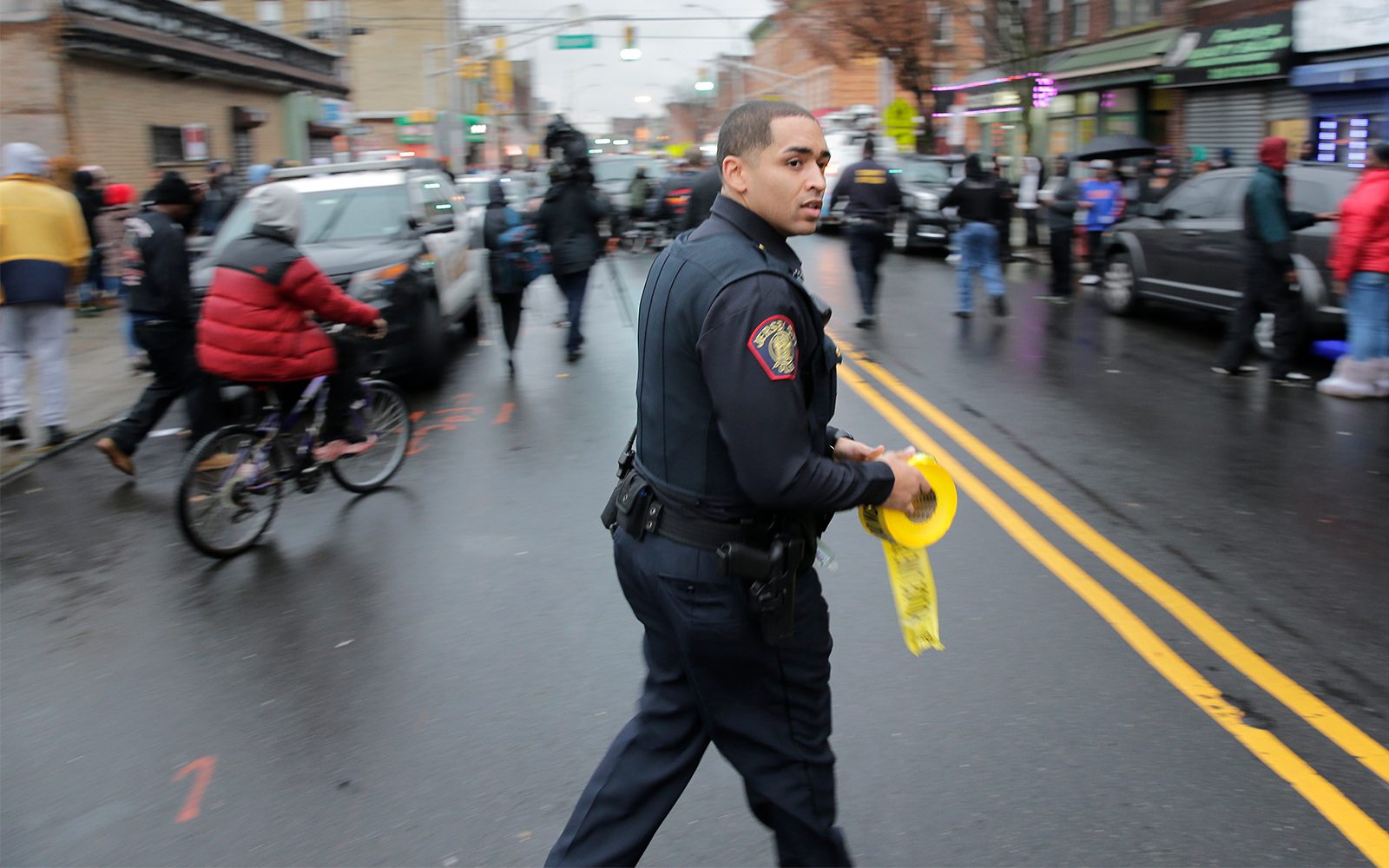 A police officer pushes pedestrians back from the scene of a shooting in Jersey City, New Jersey, Dec. 10, 2019. (AP Photo/Seth Wenig)

Kelly said that when police responded to the area of the kosher store, officers “were immediately engaged by high-power rifle fire.”

“Our officers were under fire for hours,” the chief said.

Inside the grocery store, police found the bodies of who they believed were the two gunmen and three other people who apparently happened to be there when the assailants rushed in, authorities said. Police said they were confident the bystanders were shot by the gunmen and not by police. 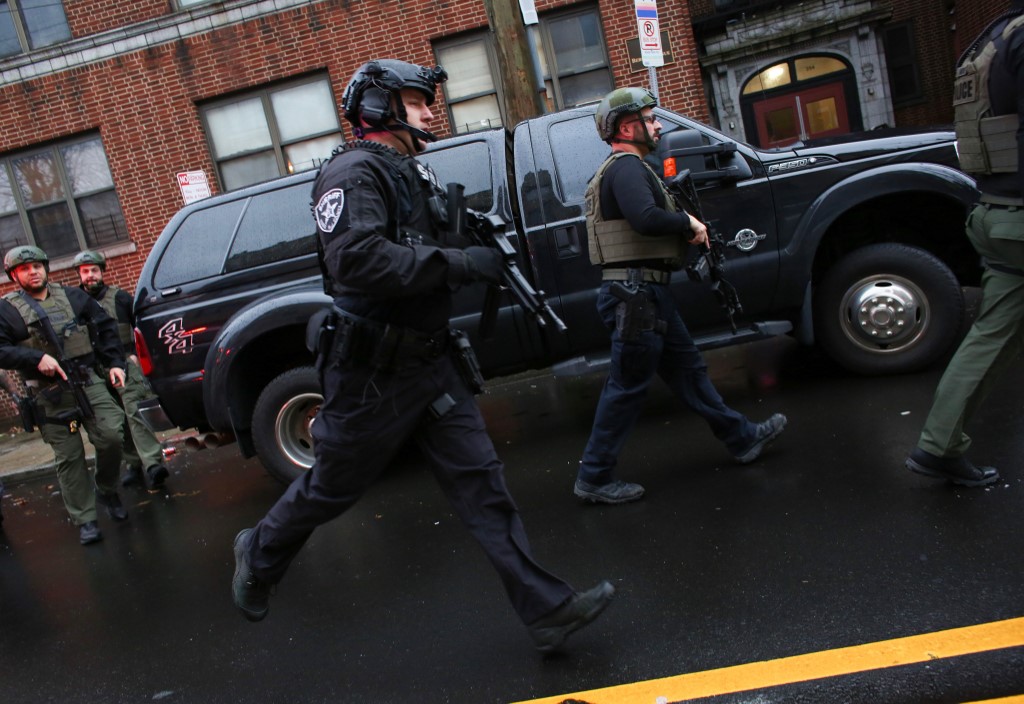 Police officers arrive at the scene of a shooting in Jersey City, New Jersey on December 10, 2019. (Kena Betancur/AFP)

US President Donald Trump said he had been briefed on the incident, which he called a “horrific shootout,” adding that the White House would be monitoring the situation and assisting local officials.

“Our thoughts & prayers are w/ the victims & their families during this very difficult & tragic time,” Trump wrote on Twitter.

JOIN US!
A MESSAGE FROM THE EDITOR OF TIMES OF ISRAEL
DAVID HOROVITZ

For as little as $6 a month, you can help support our independent journalism — and enjoy an ADS-FREE experience, as well as special benefits and status as a Times of Israel Community member!

Read more JOIN THE TIMES OF ISRAEL COMMUNITY Already a member? Sign in to stop seeing this At least six Philadelphia police officers were shot Wednesday afternoon in an active standoff with a gunman holed up in a North Philly house.

A large police presence responded to a shooting incident at about 4:30 p.m. local time in a residential area of the Nicetown section of the city. One male shooter was still inside a residence in what police described as an active situation.

A police spokesperson told NBC News that the incident began when an officer attempted to serve a warrant at the address.

Officers took cover behind cars and blocked off surrounding streets as they were fired upon by the unidentified shooter.

A Philadelphia Police Department spokesperson told NBC News that “several” officers were injured in the exchange and described the scene as “an active and ongoing incident.” The spokesman said in a tweet Wednesday that six officers were shot and taken to area hospitals with non-life threatening injuries.

NBC Philadelphia reported that one other officer was injured in a car accident at a nearby intersection.

1,241 people are talking about this

The nearby campus for Temple University’s Health Sciences Center is under lockdown as the situation unfolds.

Lockdown is in effect for Health Sciences Center Campus. Seek shelter. Secure doors. Be silent. Be still. Police are responding.

448 people are talking about this

SEPTA, the city’s public transit provider, reported that it will temporarily bypass Hunting Park, Erie, and Allegheny stations, all located in the surrounding area of the shooting.

President Donald Trump has been briefed on the standoff, according to a White House pool report. Pennsylvania Gov. Tom Wolf also said he was aware of the situation and offered support to local police.

“Praying for the recovery of the police officers who were injured in the line of duty and the safety of others responding to this incident,” Wolf said in a tweet.

This is a developing story.