Irbil – A delegation from the Iraq’s Sadr Movement kicked off on Saturday an official visit to the Iraqi Kurdistan Region.

Headed by Ahmed al-Sadr, son of the movement’s leader Moqtada, the delegation was welcomed in Irbil by President Masoud al-Barzani.

The president’s media officer Kifah Mahmoud told Asharq Al-Awsat that the two sides discussed the political situation in Iraq and the ongoing war against ISIS in the city of Mosul.

They also tackled the post-ISIS phase, especially in Iraq, he revealed.

The Sadr delegation said that they are making preparations for the upcoming elections, he said.

Meanwhile, Kirkuk governor Najm Eddine Karim announced that Baghdad is not offering any aid to the city.

He told reporters during a celebration in honor of Kurdish journalism: “There are over half a million refugees in Kirkuk, including 30,000 families that have fled al-Huweija district.”

“This is posing a major burden on the city and the residents are sharing medicine, water, electricity and other services with these refugees. Their patience will not last long,” he warned.

He therefore demanded that Baghdad work on allowing the displaced to return to the liberated areas “as soon as possible.”

“The delay in liberating al-Huweija does not serve Kirkuk or Iraq,” Karim said.

He said that Baghdad’s aid to refugees in Kirkuk is so slim that it is bordering on nonexistent, urging the Iraqi government and Prime Minister Haidar al-Abadi to seriously address Kirkuk’s demands.

“Everyone in Baghdad and anywhere else should know that the residents of Kirkuk will not accept this attitude,” he warned. 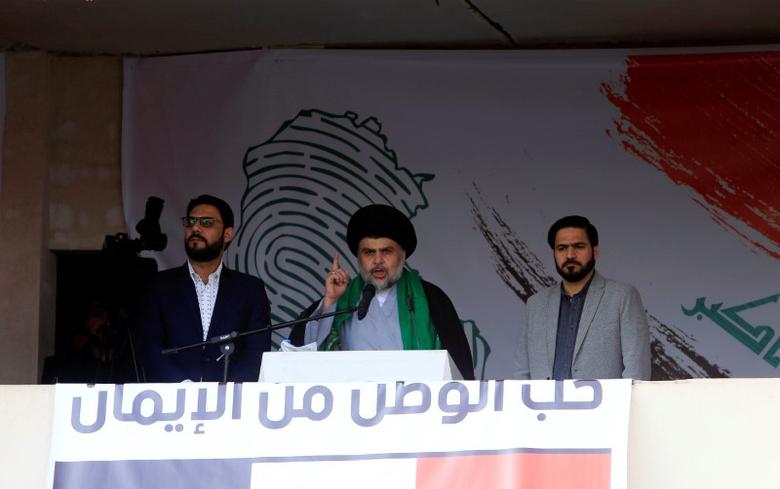 Iraqi Shi’ite cleric Moqtada al-Sadr speaks during a protest against corruption and informs his followers about his will at Tahrir Square in Baghdad, Iraq March 24, 2017. REUTERS/Alaa Al-Marjani

Sadr, who commands a large following among the urban poor of Baghdad and the southern cities, is the first Iraqi Shi’ite political leader to urge Assad to step down.

But his call was wrapped in kind words about the Syrian president and condemnation of the U.S. strikes carried out on a Syrian airbase on Friday, in retaliation for a chemical attack on civilians in a rebel-held area of Syria.

Sadr said the U.S. strikes would “drag the region to war” and could help “the expansion of Daesh,” the militant Islamic State group, which controls parts of Iraq and Syria.

Iraq’s Shi’ite-led governments have maintained good relations with the Syrian government throughout the six-year Syrian civil war. Sadr is the only Iraqi Shi’ite leader to keep some distance from Iran, a main backer of Assad along with Russia.

“I think it would be fair for President Bashar al-Assad to offer his resignation and step down in love for Syria, to spare it the woes of war and terrorism …and take a historic, heroic decision before it is too late,” Sadr said in a statement.

The Shi’ite-led Iraqi government issued a statement on Friday that reflected the difficult balancing act it maintains between its alliance with the United States and with Shi’ite Iran. It condemned the chemical attack, without naming Assad, calling instead for an international investigation to identify the perpetrator.

The statement also criticized “the hasty interventions” that followed the chemical attack, in an apparent reference to the U.S. strikes.

A U.S.-led coalition has been providing air and ground support to Iraqi forces battling Islamic State, allowing them to recapture most of the cities they had overrun in 2014 in Sunni areas of northern and western Iraq.