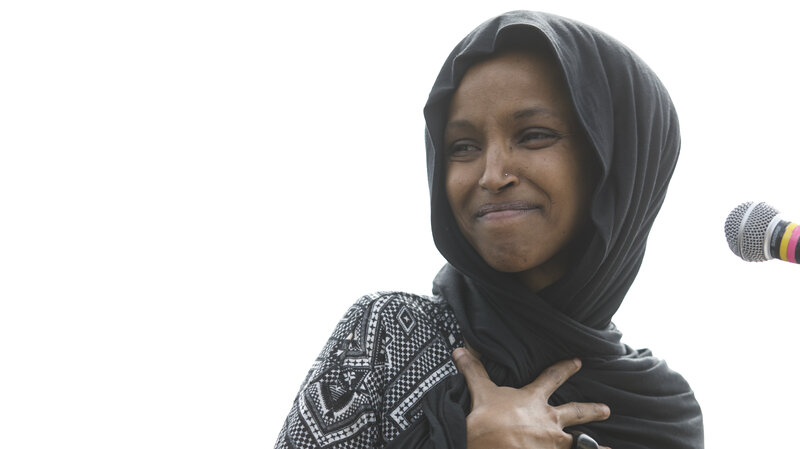 Rep. Ilhan Omar (D-Minn.) attends a Youth Climate Strike on March 15 in Washington. On Thursday, the New York Postincited criticism by featuring a partial quote by Omar with an image of the Sept. 11 terrorist attack.

The New York Post is facing a barrage of criticism after its cover on Thursday featured an image of the World Trade Center, burning in the Sept. 11 terrorist attack, below a terse quote by one of the first Muslim women serving in Congress.

The quote came from a speech Rep. Ilhan Omar, D-Minn., gave last month. She was speaking at a banquet hosted by the Council on American-Islamic Relations, discussing how terrorism has led to a rise in Islamophobia. 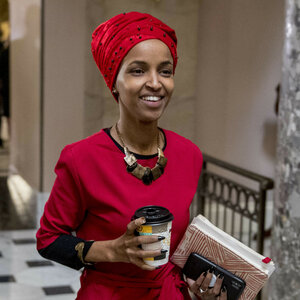 “Far too long we have lived with the discomfort of being a second-class citizen and frankly, I’m tired of it, and every single Muslim in this country should be tired of it,” she told the crowd. “CAIR was founded after 9/11 because they recognized that some people did something and that all of us were starting to lose access to our civil liberties.” (The Sept. 11 attacks occurred in 2001. CAIR was was founded in 1994.)

Days after the banquet, critics zeroed in on her description of the terrorist attack, inciting outrage that bore resemblance to the condemnation she received after making remarks about Israel.

On Fox & Friends, co-host Brian Kilmeade told viewers, “You have to wonder if [Omar] is an American first.”

“This woman is a disgrace,” Donald Trump Jr. tweeted. 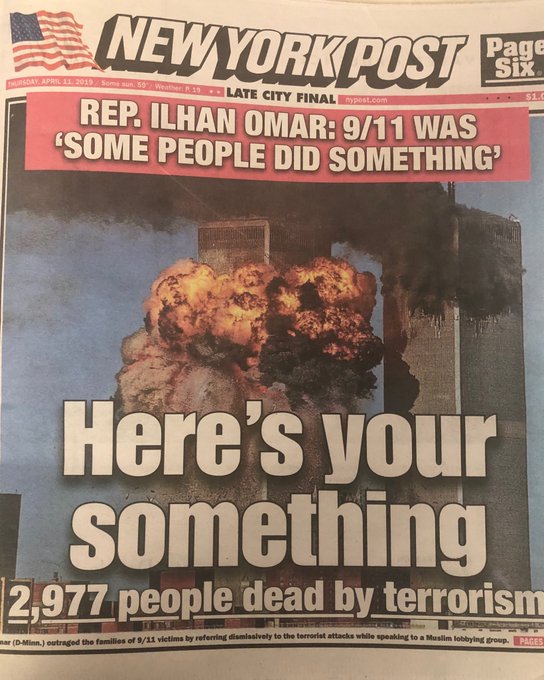 Rep. Dan Crenshaw, R-Texas, a former Navy SEAL who lost an eye in a bombing in Afghanistan, said it was “unbelievable.” “You described an act of terrorism on American soil that killed thousands of innocent lives as ‘some people did something.’ It’s still unbelievable,” he later wrote on Twitter.

Rep. Ben Ray Luján, D-N.M., and assistant speaker in the House, told MSNBC, “Those statements were not only hurtful to me, but extremely hurtful to everyone that was personally impacted by those terrorist attacks.”

But the Post‘s incendiary cover, released at a time when owner Rupert Murdoch and Fox have come under intense scrutiny, has made it the target of a different strain of anger.

“Their intention was to be inflammatory, to generate sales at the expense of dividing our country,” Hassan Shibly, head of CAIR’s Florida chapter, tells NPR.

“Far too many people have tried to blame, even retaliate, against Muslim communities when we are victims of that attack just like all Americans,” Shibly says.

Omar continues to receive death threats, he says. “Obviously the first hijab-wearing, American Muslim woman [in Congress] is going to be the first target,” he says. “People’s deep-seated hatred for the Muslim community is now being projected onto her.”

Joseph Azam, one of Murdoch’s former top executives, described the newspaper cover as “the virulent anti-Muslim bigotry being put out by various parts of the Murdoch empire.” Azam recently told NPR he left his post because he was sickened by the coverage of Muslims, race and immigration in Murdoch’s outlets. “They are going to get ppl killed – is that the goal?” Azam tweeted Thursday.

House colleagues came to Omar’s aid. Rep. Rashida Tlaib, D-Mich., tweeted, “The NY Post knows exactly what it’s doing – taking quotes out of context and evoking painful imagery to spread hate and endangering the life of Rep. Omar. Shame on them, and shame on Rupert Murdoch.” 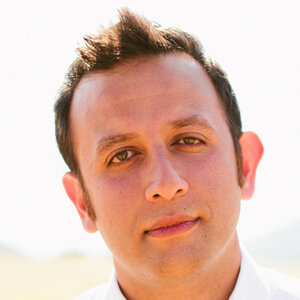 Rep. Alexandria Ocasio-Cortez,‏ D-N.Y., called the cover “horrifying” and “hateful,” before adding that Omar co-sponsored the September 11th Victim Compensation Fund. She told reporters that the wrath against Omar was “not a normal level of political debate or rhetoric.”

On Friday, Omar herself quoted words uttered in the wake of 9/11 by former President George W. Bush, adding, “Was Bush downplaying the terrorist attack?”

The newspaper cover wasn’t the first time Omar was linked to the Sept. 11 attack. A poster at a winter event sponsored by the Republican Party of West Virginia showed a photo of the congresswoman, wearing a hijab, beneath a photo of the twin towers engulfed by flames. 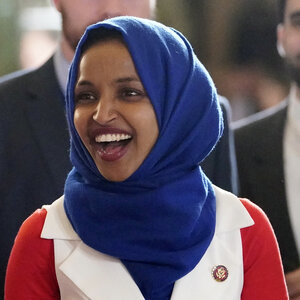 A group called ACT for America, which had set up a table near that poster, describes itself as a national security organization and is labeled as an anti-Muslim hate group, promoted the Post cover on Twitter. It called Omar’s rhetoric “dangerous.”

According to a 2018 Pew Research Center estimate, Muslims made up about 3.45 million people in the United States in 2017, slightly more than 1 percent of the total population.

(THIS ARTICLE IS COURTESY OF THE NEW YORK POST)

Jewish voters are furious at Dems’ defense of Ilhan Omar

Why Pelosi really hates impeachment and other commentary

Jewish voters furious at Democrats’ defense of Rep. Ilhan Omar say they’re done with the party that has held their support for generations.

“We felt we had a home there,” said Mark Schwartz, the Democratic deputy mayor of solidly blue Teaneck, NJ. “And now we feel like we have to check our passports.”

Jordan Manor of Manhattan, who calls himself a “gay Jewish Israeli-American,” laments, “The party I thought cared about me seems to disregard me when it comes to my Jewish identity.”

Mark Dunec, a consultant in Livingston, NJ who ran for Congress as a Democrat in 2014, says, “I’m physically afraid for myself and for my family,” adding, “I see my own party contributing to the rise of anti-Semitism in the United States.”

Omar, a freshman congresswoman from Minnesota, sparked the firestorm in February for using anti-Jewish tropes: saying that support for Israel was “all about the Benjamins” and accusing Jewish-American legislators of “dual loyalty.”

Many, including some fellow Democrats, deemed her comments anti-Semitic — but the party’s lefty activists pushed back.

“No one seeks this level of reprimand when members make statements about Latinx + other communities,” complained Rep. Alexandria Ocasio-Cortez in a March 5 tweet.

Omar issued only a partial apology.

In response, the House passed a resolution condemning all “hateful expressions of intolerance” with kitchen-sink language that named nearly a dozen different groups.

“I feel confident that [Omar’s] words were not based on any anti-Semitic attitude,” House Speaker Nancy Pelosi said.

Many Jewish Dems in the city aren’t buying it.

“The fake defense she doesn’t know what she’s saying? I don’t believe it,” said Sara, a Queens teacher who asked not to be fully identified. “This is a grown woman and a member of Congress. Trying to excuse this as naivete is inexcusable.”

For her and others, anger is sparking immediate action.

“The watered-down resolution triggered my decision to walk away from the Democratic Party,” said Allison Gangi of Manhattan.

“I never dreamed anti-Semitism would have become mainstream on the left, but it has.”

Sara said she is “not comfortable anymore being a Democrat” and will register as an independent.

Among his Teaneck neighbors, Schwartz said, “Our only question now is, do we start voting Republican, or do we become Republicans?”

Others say they feel like the wandering Jew of legend.

“I’m homeless. I don’t think I can vote for Trump, even though he’s great for Israel,” said Jason, a start-up owner from Long Island who asked that his surname not be used. “But as a Jew, I can’t see a way to support the Democratic Party. It’s supporting your own destruction.”

“Since launching this, the anti-Semitism we are seeing is so blatant and obvious it’s terrifying,” said Elizabeth Pipko, the group’s spokeswoman and a volunteer on Trump’s 2016 campaign.

“I leave them up, because people have got to see it,” Pipko said.