(THIS ARTICLE IS COURTESY OF THE PAKISTANI NEWS AGENCY ‘DAWN’)

People marched in Myanmar’s largest city on Sunday to support the military, which has come under heavy criticism over violence that has driven hundreds of thousands of Rohingya Muslims to flee to neighbouring Bangladesh.

More than 2,000 army supporters, including Buddhist nationalists and monks, took part in the march.

“I want to urge you to support the military. Only if the military is strengthened will our sovereignty will be secured,” a senior Buddhist nationalist monk, Zagara, told the crowd.

More than 600,000 Rohingya from northern Rakhine state have fled to Bangladesh since August 25, when Myanmar security forces began a scorched-earth campaign against Rohingya villages. Myanmar’s government has said it was responding to attacks on police outposts by insurgents, but the United Nations and others have said the response was disproportionate.

The exodus of the Rohingya has become a major humanitarian crisis and sparked international condemnation of Myanmar.

Nyunt Yi, a 70-year-old retired military soldier who served in the army for more than 40 years, said Sunday that “only the army can protect the national security and stop the illegal intruders”. referring to the Rohingya.

Myanmar’s Buddhist majority denies that Rohingya are a separate ethnic group and regards them as having migrated illegally from Bangladesh, although they have lived in Myanmar for generations. 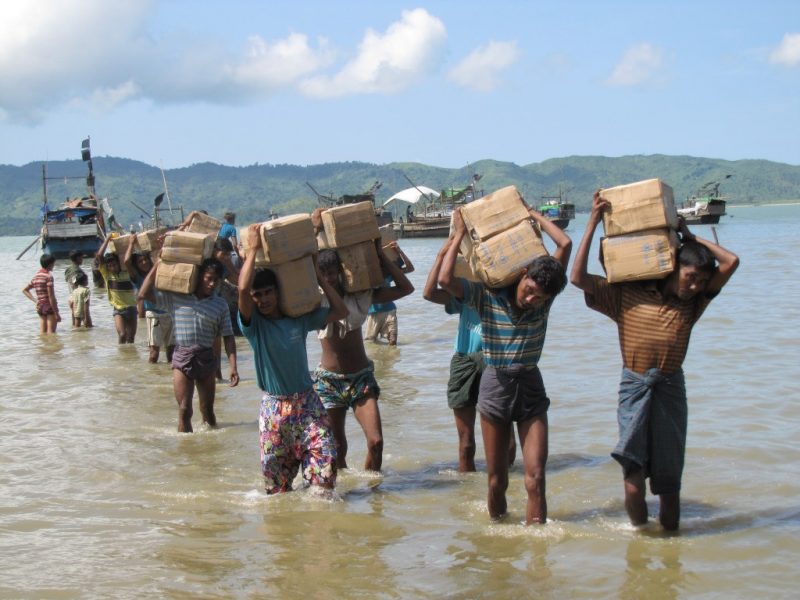 On September 19, 2017, Myanmar’s State Counsellor Aung San Suu Kyi delivered a widely anticipated speech in front of diplomats, United Nations officials, and members of the media to speak about what the government is doing to address the refugee crisis in Rakhine State.

Since August, about 400,000 Rohingyas have escaped to Bangladesh after the Myanmar government intensified its crackdown of insurgents belonging to the Arakan Rohingya Salvation Army (ARSA), which attacked several police and military outposts.

The crackdown involved clearing operations that displaced thousands of Rohingya families. Both the ARSA and government troops accused each other of committing widespread abuses such as looting and burning of houses, beating and killing of women and children, and instigating religious violence. The conflict has affected various ethnic groups in the Rakhine state.

The Rohingya people are an ethnic group in western Myanmar, but the government considers them to be illegal immigrants from Bangladesh and denies them citizenship. Most are Muslim, and living in a country with a Buddhist majority population, they suffer from discrimination. Many are deprived of basic social services.

In her speech, Suu Kyi assured Myanmar’s ethnic groups that the government is thinking about their welfare. Unfortunately, she failed to mention the Rohingya, a move in line with the government’s refusal to recognize the Rohingya as an official ethnic group. In fact, her whole speech avoided reference to “Rohingya” and instead she referred to them simply as Muslims:

We feel deeply for the suffering of all the people who have been caught up in the conflict. Those who have had to flee their homes are many – not just Muslims and Rakhines, but also small minority groups, such as the Daing-net, Mro, Thet, Mramagyi and Hindus of whose presence most of the world is totally unaware.

She also said refugees who fled to Bangladesh can return to Myanmar — but only after undergoing a verification process:

Those who have been verified as refugees from this country will be accepted without any problems and with full assurance of their security and their access to humanitarian aid.

With regard to the recent spate of attacks in Rakhine, she spoke about punishing groups responsible for spreading violence:

Action will be taken against all peoples, regardless of their religion, race, or political position who go against the laws of the land and who violate human rights as accepted by our international community. We have never been soft on human rights in this country.

Suu Kyi, who won a Nobel Peace Prize in 1991 for her promotion of democracy, has been criticized for her silence regarding the issue and her alleged inaction to prevent the persecution of Rohingya. Her September 19 speech was regarded as a crucial moment for her to clarify once and for all the government’s position on the matter, in particular the forced exodus of thousands of Rohingya to nearby Bangladesh. Suu Kyi is not the head of government but she is the leader of the ruling party.

In her speech, Suu Kyi emphasized that Myanmar has a fragile democracy that is undergoing transition after five decades of experiencing direct military rule. She added that the new government has been in power for only 18 months and it has been struggling very hard to enforce reforms while keeping peace and restoring democratic processes.

Meanwhile, Vice President U Henry Van Thio addressed the United Nations General Assembly on September 20 and echoed Suu Kyi’s point that the majority of Muslims in Rakhine have decided to remain in the country:

We would need to find out the reason for this exodus. What is little known is that the great majority of the Muslim population decided to remain in their villages. We share the need to ensure that vital humanitarian assistance is provided to all those in need.

Suu Kyi’s speech was beamed live across Myanmar and groups of people even watched it in the capital while holding placards with the words, “We stand with Aung San Suu Kyi.” 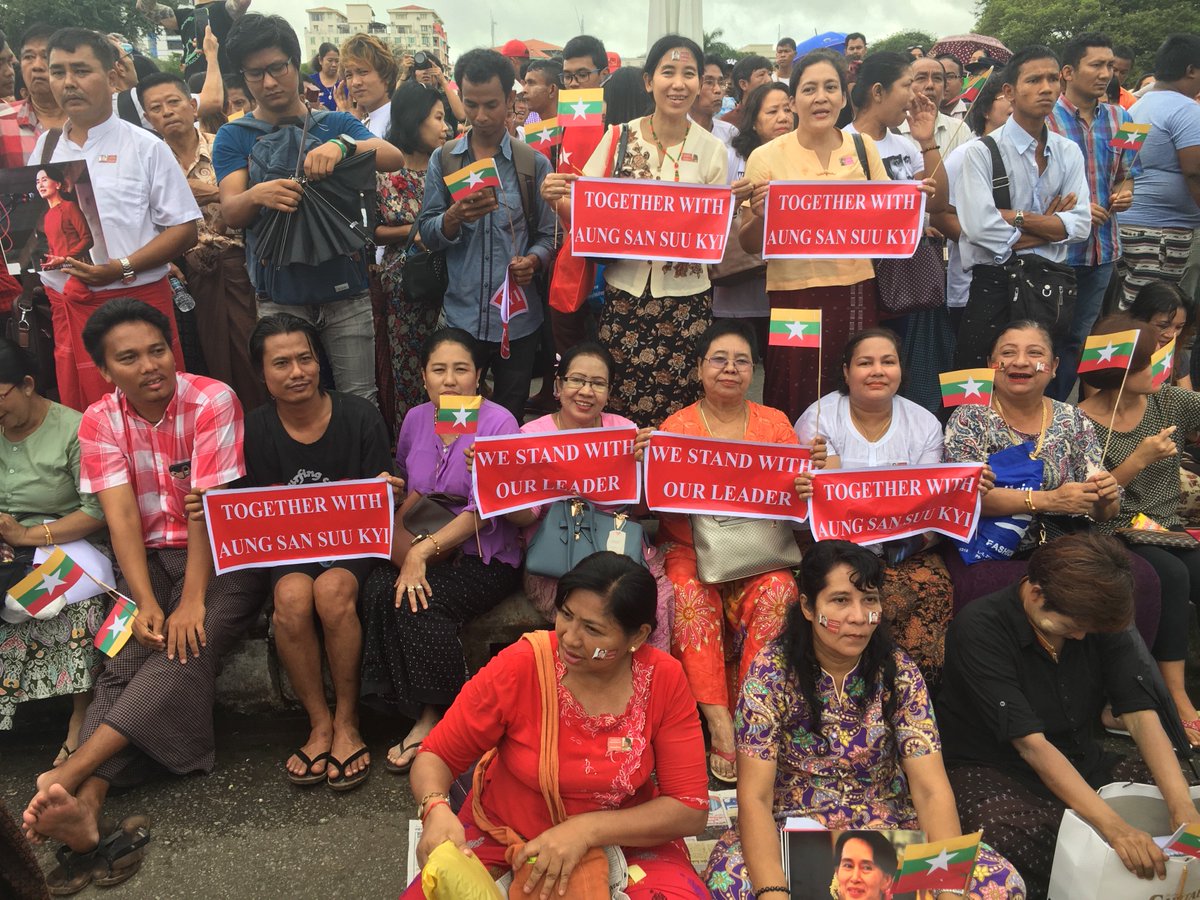 Historian Thant Myint-U thinks the speech will resonate with the domestic population, but international critics will not be satisfied:

My guess is that the harshest international critics of the government will be far from satisfied; but that the vast majority of Burmese people and at least some foreign governments will feel she’s steering the only realistic course she can under very complex circumstances.

Indeed, local media highlighted how global news reports about the refugee crisis focused on the Rohingya but neglected the situation of other ethnic groups. Some even complained that rich countries are unduly interfering in Myanmar’s domestic affairs.

‘Little more than a mix of untruths and victim blaming’ 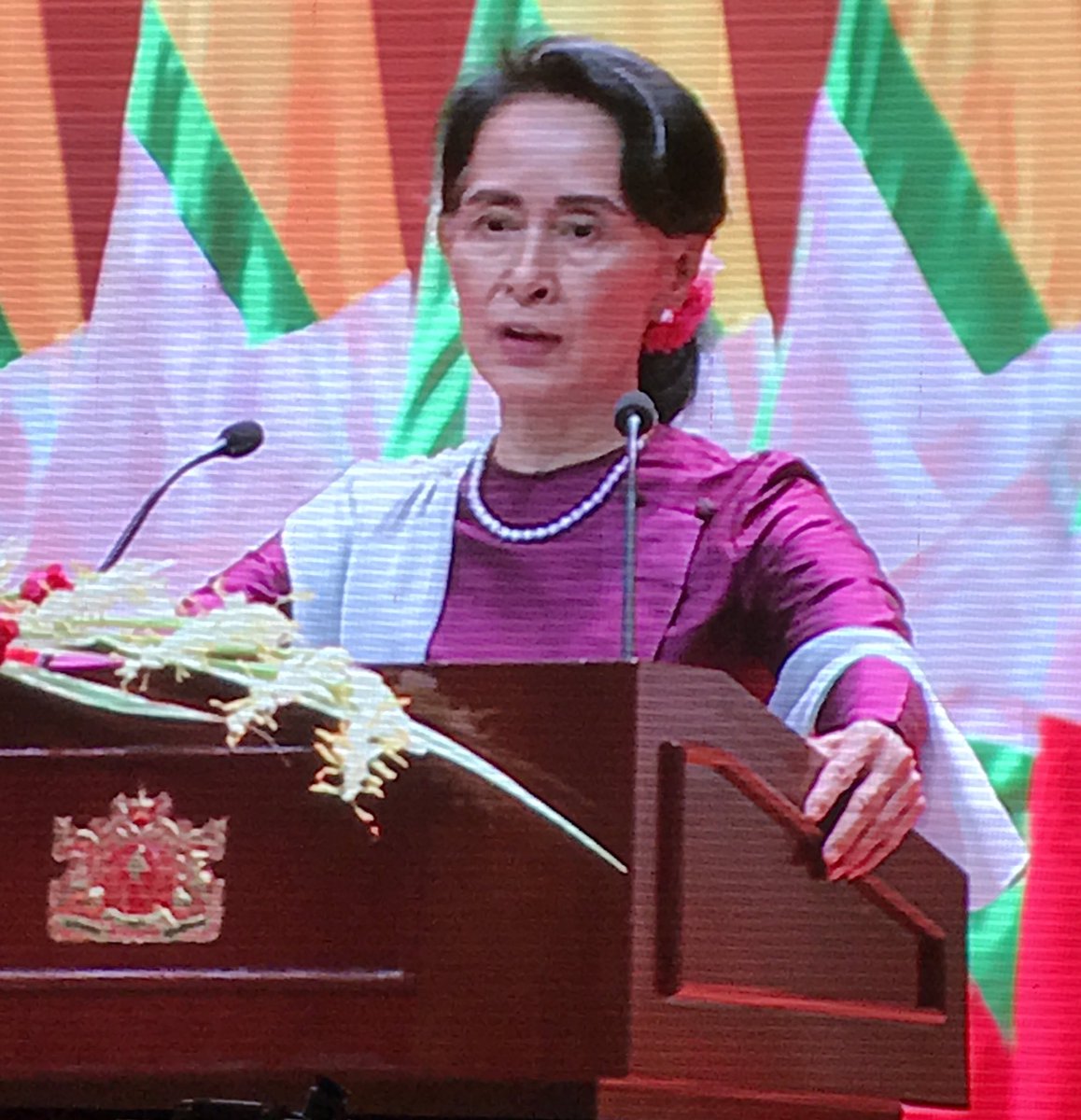 ASSK’s speech on Rakhine: we feared denial and hoped for a message of compassion and justice: neither has come true. #Myanmar @DutchMFA

James Gomez of Amnesty International wondered about Suu Kyi’s “silence about the role of the security forces” in the attacks against the Rohingya:

Aung San Suu Kyi today demonstrated that she and her government are still burying their heads in the sand over the horrors unfolding in Rakhine State. At times, her speech amounted to little more than a mix of untruths and victim blaming.

Generalizing a problem in order to ignore a specific emergency works like a charm for people in power when their followers are on board.

Watching the crowd outside City Hall throw a mini-rave before and after they heard Aung San Suu Kyi trivialize the pain of the world’s most persecuted people made it clearer than ever that the struggle for real justice inside Myanmar will be long and torturous. But it will only begin once at least one person in the crowd suggests that death and displacement are no occasion for a dance party.

After weeks of being quiet about the issue, Suu Kyi broke her silence but failed to appease everyone, especially human rights groups. Worse, by avoiding to mention the Rohingya, Suu Kyi’s speech could in fact reinforce negative views about the ethnic group. Meanwhile, as Myanmar rebuilds the shattered villages in Rakhine, the situation of Rohingya refugees staying in makeshift camps in both Bangladesh and Myanmar continues to deteriorate.

(THIS ARTICLE IS COURTESY OF BBC ASIA NEWS)

The Myanmar army says it shot dead at least 25 people in Rohingya Muslim villages in restive Rakhine state on Sunday.

It said the people killed had been armed with machetes and wooden clubs.

On Saturday, the army launched attacks with helicopter gunships on Rohingya villages in Rakhine. Eight people, including two soldiers, died.

Images and videos on social media showed women and children were among those killed.

Hundreds of villagers were forced to flee their homes over the weekend. Analysis by Jonah Fisher, BBC News, Yangon

There’s no independent media access to northern Rakhine State, so the official accounts must be read critically.

If you’re to believe the army version you have to accept that Rohingya men armed only with “wooden clubs and machetes” would launch attacks on soldiers equipped with guns.

You also have to accept the idea that the Rohingya are setting fire to their own homes, making themselves intentionally homeless.

State media report that the Rohingya torched 130 homes on Sunday in order to “cause misunderstanding and tension” and get international aid.

There’s a very different narrative on Rohingya social media. Again it should be viewed critically, in the past the Rohingya have exaggerated alleged atrocities.

The Rohingya images and videos from this last weekend show dead women and children and people fleeing burning homes. Helicopter gunships fly overhead. Some of it is certainly genuine.

The security forces in Rakhine are controlled by the army not the country’s de-facto leader Aung San Suu Kyi.

But the former Nobel peace prize winner is conspicuously silent. So far she’s refused diplomats’ demands for a credible independent investigation into events.

Rakhine has been under military lockdown since last month, after nine policemen were killed by insurgents in a series of attacks on border posts.

The state is home to more than a million Rohingya Muslims, who are not recognised as Myanmar citizens.

Tens of thousands are living in temporary camps, after being displaced during fighting with majority Buddhists in 2012 which left scores dead.

The Rohingya are disliked by many in Myanmar, who consider them illegal immigrants from Bangladesh, despite many having lived in the country for generations.

Rights groups say the Rohingya population has been subject to severe restrictions on movement and are denied the most basic of human rights.