(THIS ARTICLE IS COURTESY OF THE KASHMIR OBSERVER)

ISLAMABAD — A powerful remote-controlled bomb blast near a mosque in Pakistan’s Balochistan province has killed four policemen and injured 11 others, the second major attack to rock the restive region in the last three days.

The explosion occurred on Monday night when people were assembling for prayers near the mosque in the provincial capital Quetta’s Satellite Town area.

The attack took place shortly after a police van arrived at the site to provide security to the people offering prayers at the mosque.

“The police vehicle carrying personnel for mosque security was targeted in the blast in which our four personnel of Rapid Response Group (RRG) lost their lives, while the condition of another was stated to be serious,” said Quetta Deputy Inspector General (DIG) Razzaq Cheema.

Another 11 people were injured in the attack, Provincial Home Minister Ziaullah Langov said.

This was the second major terrorist attack in Balochistan within the last three days.

An improvised explosive device planted in a motorcycle went off close to the police van. Sources said unidentified people parked the explosive-laden motorbike near the mosque in Satellite Town area and detonated it by remote control when the police van arrived there, the Dawn reported.

“Three police officials among the injured died soon after being brought here at the hospital,” officials at a healthcare facility said.

Many vehicles parked in the area were damaged and window panes of nearby buildings were shattered due to the powerful blast, though the mosque remained safe in the attack.

Security forces have cordoned off the area and launched a search operation to trace those involved in the blast.

The banned Tehreek-i-Taliban Pakistan has claimed responsibility for the motorcycle bomb blast targeting the police vehicle, the report said.

Khan has sought a report on the blast and said the country was fully committed to completely eliminating terrorism.

The prime minister said those who target innocent people in the holy month of Ramadan did not have a religion.

The nation’s spirit is strong and Pakistan is determined to do away with the menace of terrorism, he said.

“Efforts are being made to sabotage peace under a wicked conspiracy. Those creating instability would be fought back with full force,” he said.

Vowing to improve the security arrangements, the chief minister also directed the concerned authorities to provide the best medical facilities to the wounded persons.

The Islamic State, also known as ISIS, claimed responsibility for the attack in Quetta, the capital of the restive Baluchistan Province, in the country’s southwest. The group’s Amaq News Agency posted a statement online Sunday that said attackers had stormed a church in Quetta, but gave no further details.

Pakistani officials denied that ISIS had an organized presence in the country, however, even though the terrorist group has claimed responsibility for several other attacks in Baluchistan in recent years.

“December is a month of Christian religious rituals,” Mr. Gill said. “We had demanded the government beef up security for churches all over the country. But they have failed to do so.”

Christians make up at least 2 percent of the country’s population of about 198 million. Most of them are marginalized and perform menial jobs.

The attack, a week before the Christmas holiday, unfolded in the early morning hours at Bethel Memorial Methodist Church. About 400 people had gathered for Sunday service when an assailant detonated his explosives-laden vest near the door to the church’s main hall.

Another attacker failed to detonate his suicide jacket and was shot by security forces after an intense firefight, officials said.

Sarfraz Bugti, the provincial home minister, said the death toll could have been higher had the attacker managed to reach the main hall of the church, which is on one of the busiest roads in the city and near several important public buildings.

Local television networks broadcast images of terrified worshipers running out of the church as the attack was underway. Several young girls, wearing white frocks and holding red bags, could be seen fleeing the compound. Witnesses told local news outlets that people, panicked and frightened, had rushed out after hearing a loud explosion, followed by the sound of gunfire outside.

As security forces moved inside the main hall after the attack, they were confronted by a scene of bloody destruction. Several benches and chairs were overturned. Musical instruments were turned upside down.

A Christmas tree with decorative lights stood at one corner, and a pool of blood lay outside the door where the suicide bomber had detonated explosives.

Quetta has been the scene of violent terrorist attacks recently, and a large number of military and paramilitary troops, apart from the police, have been deployed to maintain security.

Officials have repeatedly claimed that they have reduced violence in Baluchistan, a rugged and resource-rich province bordering Afghanistan and Iran. But the ease with which the attackers managed to carry out their assault on Sunday seemed to belie those claims.

“The army repeatedly claims that it has broken the backbone of terrorism in the country,” Mr. Gill said. “But terrorism is still very much present and destroying the lives of common people.”

An insurgency by Baluch separatists has long simmered in the province, and the Taliban and other militants maintain a presence in the region.

Some officials were quick to shift blame toward Afghanistan, pointing to the presence of havens there for militants.

“The terrorists have safe sanctuaries across the border in Afghanistan,” said Anwar-ul Haq Kakar, a spokesman for the Baluchistan government. “They have become a major source of terrorism inside Baluchistan.”

Many minority leaders, however, stressed that there was a bigger need to look inward to ensure security for religious minorities, especially Christians.

“This attack is a serious breach of security,” Mr. Gill said. Pakistani security officials inspect the site of an explosion in Quetta on Friday. All told, dozens of people were killed Friday in several cities across Pakistan.

Pakistan was hit with a spate of violence in several cities Friday, leaving the country to cope with the deaths of dozens of people and scores more injured. In twin bombings at a market in Parachinar, a car bombing in Quetta and a shooting in Karachi, more than 80 people were killed in the bloodshed.

“Enemy trying to mar festive mood of nation through such cowardly acts,” Pakistan’s chief of army staff, Qamar Javed Bajwa, said in a statement quoted by a military spokesman. “Shall fail against the resilience of Pakistan.”

The deadliest of Friday’s attacks came during rush hour in the town of Parachinar, where local authorities say 67 people were killed and scores more were injured. Turi market had been packed with residents preparing for their iftar meals to break the Ramadan fast at day’s end.

“The first blast took place at around 5pm in Turi Market, located on the edge of the recently-designated Red Zone, said a senior administration official,” Pakistani news outlet The Express Tribune reports. “The second explosion occurred when rescuers and bystanders rushed to help the survivors of the first blast.”

There was no immediate claim of responsibility for the two explosions, though the BBC reports that some believe Shiite Muslims were specifically targeted.

However, the British news service says two separate extremist groups — the Islamic State and a Taliban offshoot known as Jamaat-ul-Ahrar — claimed responsibility for an attack earlier that day in the city of Quetta. The bombing in Quetta occurred near a local police official’s office, and The New York Times reports that seven police officers were among the 13 people killed.

The paper, citing local officials, says at least 19 people were injured in the blast.

Elsewhere in the country, in the port city of Karachi, gunmen opened fire on police, killing at least four officers before fleeing the scene. 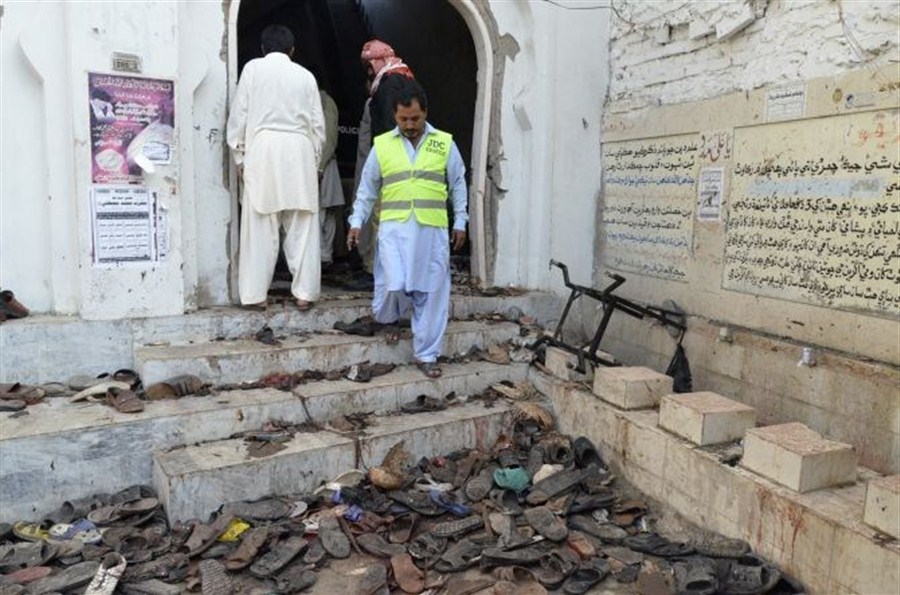 A suicide bomber shouted “Allahu akbar” and blew himself up in a packed mosque in northwestern Pakistan, killing at least 25 people and wounding 30 during Friday prayers.

No group immediately claimed responsibility for the bombing in Payee Khan, a village in Mohmand Agency that is part of the Federally Administered Tribal Areas bordering Afghanistan.

“The suicide bomber was in a crowded mosque, he shouted ‘Allahu akbar’ (God is great) and then there was a huge blast,” said Naveed Akbar, deputy administrator of Mohmand Agency.

Akbar added that some fatalities appear to have been caused when part of the mosque caved in from the force of the blast.

“A portion of the mosque and verandah collapsed in the blast and fell on worshipers. We are still retrieving bodies and the injured from the rubble of the mosque,” he said.

Local tribal elder Haji Subhanullah Mohmand said the attack may have been carried out by Islamist militants seeking revenge after local tribesmen gathered a volunteer force and killed one and captured another insurgent.

“It seems to have enraged the militants and they got their revenge by carrying out a suicide attack in a mosque today,” Mohmand said.

Pakistan’s frontier regions, which are deeply conservative and hard to access due to rough terrain, have long been the sanctuary of fighters from al-Qaeda, the Taliban and other militant groups.

In 2014 the army launched a major operation in other parts of FATA, including North and South Waziristan against insurgents who routinely attacked government officials and civilians.

Pakistan Prime Minister Nawaz Sharif condemned the bombing and said the “attacks by terrorists cannot shatter the government’s resolve to eliminate terrorism from the country.”

Security in Pakistan has improved in recent years — the military says “terrorist incidents” dropped from 128 in 2013 to 74 last year — but Islamist extremists continue to stage major attacks.

A bombing of lawyers in the city of Quetta killed 74 people last month, an attack claimed by both the Islamic State and Jamaat-ur-Ahrar, a breakaway faction of the Pakistani Taliban.

Jamaat-ur-Ahrar also claimed the Easter Sunday bombing in a park in the eastern city of Lahore that killed 72 people.