(THIS ARTICLE IS COURTESY OF THE BBC)

Hidden deep in Samoa’s thick jungles, along almost impassible rocky footpaths lie what archaeologists have called the South Pacific’s best-kept secret: star mounds. Around 80 of these ancient, star-shaped platforms have sat abandoned for around 300 years, and even after excavation, their significance continues to baffle experts. Now, though, archaeologists and historians are using the largest of these stone marvels to challenge previously held beliefs about Samoan history.

At 12m high and with a base of 65m by 60m, Pulemelei Mound, which is located on the Samoan island of Savai’i, is one the oldest and largest structures in Polynesia. Often referred to as a pyramid despite its flat top, Pulemelei Mound was most likely built in stages starting in 1,000 CE, and the structure contains eight points, or cogs, giving it the look of a star from above. It is almost squarely oriented with the points of the compass and is surrounded by several smaller mounds.

While some locals and experts believe that the pyramid was used for pigeon-snaring competitions, religious ceremonies or meetings, or as a burial monument or lookout platform, no-one has been able to pinpoint its actual significance. But now, new laser mapping of the area surrounding Pulemelei Mound has recently provided a vital clue to archaeologists.

A vast network of ruins was discovered beneath the area in a 2002-to-2004 excavation, and experts believe it is evidence of an entire pre-colonial settlement that flourished before European discovery in 1722. Experts also say that this new discovery proves that Samoa’s population before colonialism was far larger than previously thought, and they now suggest that the Samoan population mortality rate following colonialism was around 80 to 90% in some areas, a steep and shocking increase from the 20-to-50% estimate that was previously accepted.

This video is part of BBC Reel’s Secret Worlds playlist.

If you liked this story, sign up for the weekly bbc.com features newsletter called “The Essential List”. A handpicked selection of stories from BBC Future, Culture, Worklife and Travel, delivered to your inbox every Friday.

The find was made in Meidum, an archaeological site in Lower Egypt, consisting of a large pyramid and several mud-brick mastabas. This pyramid was Egypt’s first straight-sided one, but it partially collapsed due to its structure, exposing an inner core. Here, archaeologist made discoveries that helped them understand more about this ancient civilization developed their pyramid-building techniques.

But, it was revealed during Amazon Prime’s “Secrets of Archaeology” how they also got quite a scare.

The 2014 series explained: “South of Saqqara, near the oasis of Fayoum, archaeologists discovered a pyramid of historical importance because of its unique features.

“The Pyramid of Meidum was built for the Pharaoh Sneferu, founder of the Fourth Dynasty, but this pyramid is different from all the others.

“The monument was originally a step pyramid like the one in Saqqara, but here in Meidum, the architects working for Pharaoh Sneferu, believed they had found the secret of the perfect form. 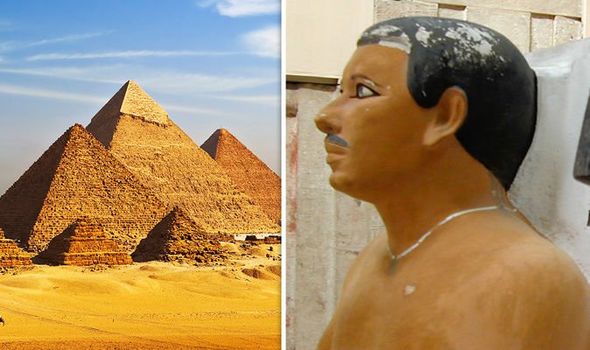 The lifelike statue was found in the pyramid (Image: AMAZON/GETTY) 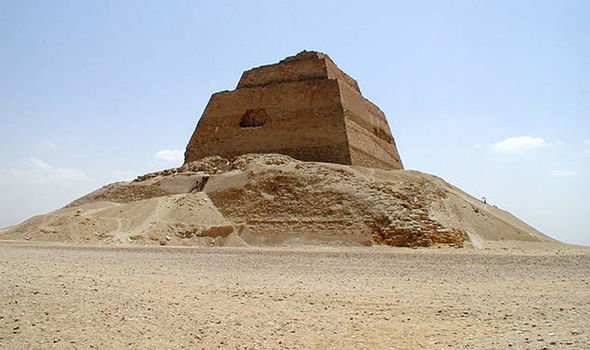 The Pyramid of Meidum (Image: WIKI)

They were terrified by their intense expression, which they believed was too lifelike

“They would abandon the previous step structure, fill in the platforms and make the line of the pyramid smooth and sloping.”

The documentary went on to detail how statues of the ancient pharaoh and his wife were found in the rubble.

It added: “It was a revolutionary concept, but something went wrong.

“The bases of the four external supporting walls fell in, and the blocks of limestone slipped downwards revealing the internal part that we see today.

“Like the pyramid in Saqqara, the Meidum pyramid was also surrounded by tombs of princes and dignitaries. 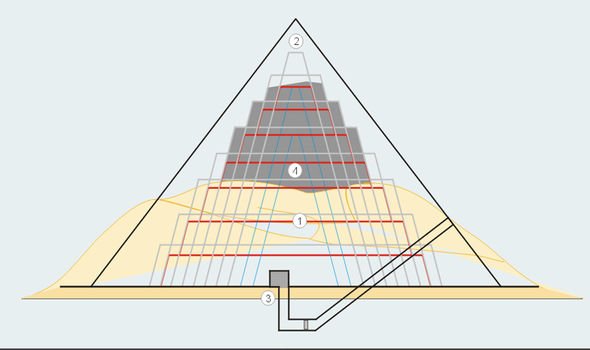 The design of the pyramid (Image: WIKI)

“Statues of Prince Rahotep and his wife on display at the Cairo Museum.”

But, the archaeologists had an eerie experience.

The series explained: “When archaeologists found here and when archaeologists discovered the statues, they were terrified by their intense expression, which they believed was too lifelike to be that of mere statue.

“Pharaoh Sneferu had another pyramid built, the pyramid Dahshur, universally known as the Bent Pyramid.

“Dahshur is the modern name of this area south of Saqqara, another monumental construction, it was worked on by thousands of builders and dozens of architects. 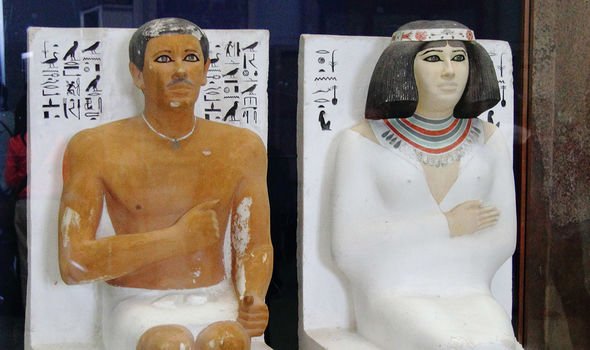 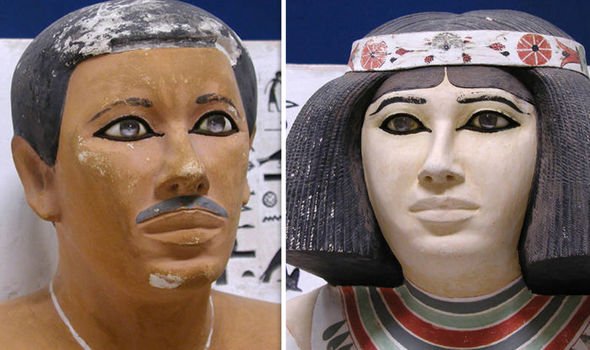 “While a step pyramid may have provided a stair by which the king ascended to heaven after his death, the true pyramids probably reflect a change to a solar cult, symbolising the Sun’s rays radiating down.”

The pyramid at Meidum is thought to be just the second pyramid built after Djoser’s and may have been originally built for Huni, the last pharaoh of the Third Dynasty, and continued by Sneferu.

The architect was a successor to the famous Imhotep, the inventor of the stone-built pyramid.

The collapse of the pyramid is likely due to the modifications made to Imhotep’s pyramid design as well as the decisions taken twice during construction to extend the pyramid.

Egyptian archaeologists have discovered mummified remains and thousands of well-preserved artifacts at a burial site of more than a dozen Egyptian priests.

Egypt’s Supreme Council of Antiquities announced Saturday the discovery of a necropolis near the city of Minya, south of Cairo in an area known to house ancient catacombs. The burial grounds date back to the late pharaonic period, which spans from 664 to 332 B.C.

“We will need at least five years to work on the necropolis,” Antiquities Minister Khaled al-Anani said, “This is only the beginning of a new discovery.”

The tombs discovered “belong to priests of the ancient Egyptian god Toth,” according to a press statement from the Egyptian Antiquities Ministry. Toth, according to Egyptian historians, was revered as the god of knowledge and wisdom.

Archaeologists discovered the mummified remains of a high priest, which was covered in beads of ivory and crystal and decorated with a bronze collar as well as amulets of semi-precious stones.

They also found 13 other burial tombs, 40 limestone sarcophagi, a collection of more than 1,000 well-preserved figurines, and four canopic jars made of alabaster and inscribed with hieroglyphs.

Mostafa Waziri, head of the archaeological mission, says eight tombs have been uncovered so far and he expects more will be discovered soon.

Earlier in February, archaeologists discovered a tomb of an ancient royal official buried more than 4,000 years ago during the period known as the “Age of the Pyramids.”

In 2017, the ministry found a necropolis holding at least 17 mummies in the area of Tuna al-Gabal, which is also known as the site of tombs, a funerary building and a large necropolis for thousands of mummified ibis and baboon birds, as well as other animals.

Egypt hopes that recent discoveries across the country will help spur the vital tourism sector, partially driven by antiquities sightseeing, which was hit hard by political turmoil following the 2011 uprising.