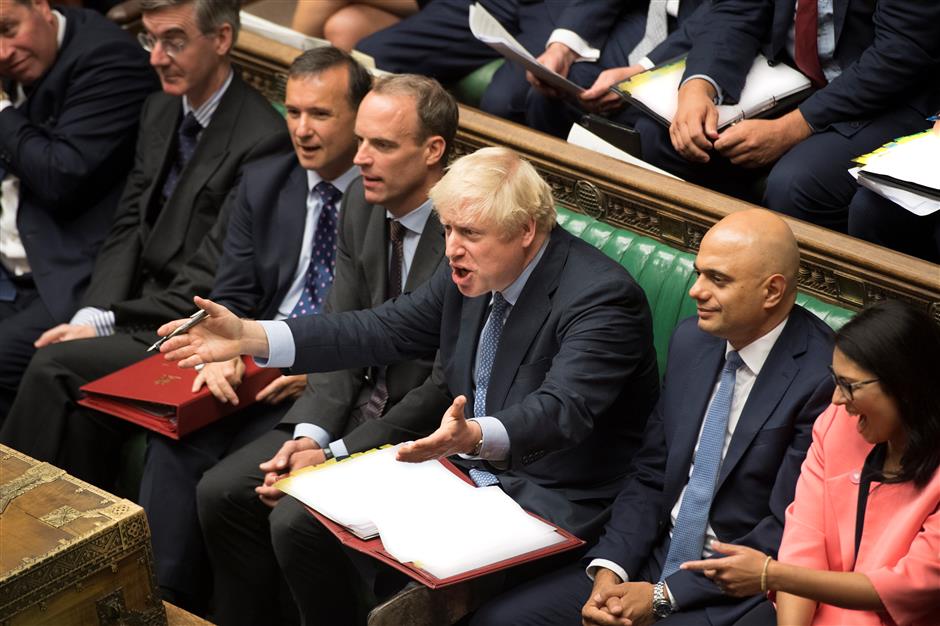 A handout photograph released by the UK Parliament shows Britain’s Prime Minister Boris Johnson gesturing as he reacts to main opposition Labour Party leader Jeremy Corbyn during his first Prime Minister’s Questions in the House of Commons in London on September 4, 2019.

British Prime Minister Boris Johnson’s government was left in limbo on Wednesday after MPs voted to derail his Brexit plan and rejected his call for an early election to break the political deadlock.

Just six weeks after taking office, Johnson lost his majority in the House of Commons as his own MPs joined opposition parties to stop him taking Britain out of the EU next month without a deal.

On Wednesday evening, they approved a bill that could force Johnson to delay Brexit to January or even later if he cannot agree exit terms with Brussels in time.

Johnson says he does not want a “no deal” exit on October 31 but says he must keep that option open in order to get an agreement.

He said the bill, which was being debated in the upper House of Lords into the night, “destroys the ability of government to negotiate” — and said he had no option to call an election to win a new mandate.

“If I’m still prime minister after (the vote on) Tuesday October 15 then we will leave on October 31 with, I hope, a much better deal,” he told MPs.

But in yet another twist in the tortuous Brexit process, the opposition Labour Party refused to vote for the election, which requires the backing of two-thirds of MPs.

Labour leader Jeremy Corbyn said that while he wanted an election, he would not support the prime minister’s “cynical” call until the law blocking “no deal” was implemented.

The default legal position is that Britain will leave the EU on October 31 unless it delays or asks to stay in the bloc.

Corbyn said: “Let this bill pass, then gain royal assent, then we will back an election so we do not crash out with a no-deal exit from the European Union.”

Johnson accused Corbyn of being frightened of losing, but urged the opposition to reconsider over the next few days.

For now, he is unable to pursue his Brexit plan — the central focus of his leadership — or call an election that might change the situation.

Across the Atlantic, US President Donald Trump earlier offered his support, telling reporters: “Boris knows how to win. Don’t worry about him. He’s going to be OK.”

Johnson took office in July, three years after the 2016 referendum vote to leave the EU, promising to deliver Brexit whatever happens.

He says he wants to renegotiate the divorce deal his predecessor Theresa May agreed with Brussels, while at the same time stepping up preparations for a disorderly exit.

But the bloc has so far refused to reopen the text, and a senior EU source poured cold water on the idea that a deal could be struck at next month’s Brussels summit.

The European Commission says Britain has yet to come up with any alternative for the most controversial element of the current deal, the so-called “backstop” plan for the Irish border.

Corbyn said the negotiations Johnson talked about “are a sham — all he’s doing is running down the clock.”

The European Commission also said the risk of a “no deal” exit has increased, a prospect many fear because of the economic damage risked by severing 46 years of UK-EU ties overnight.