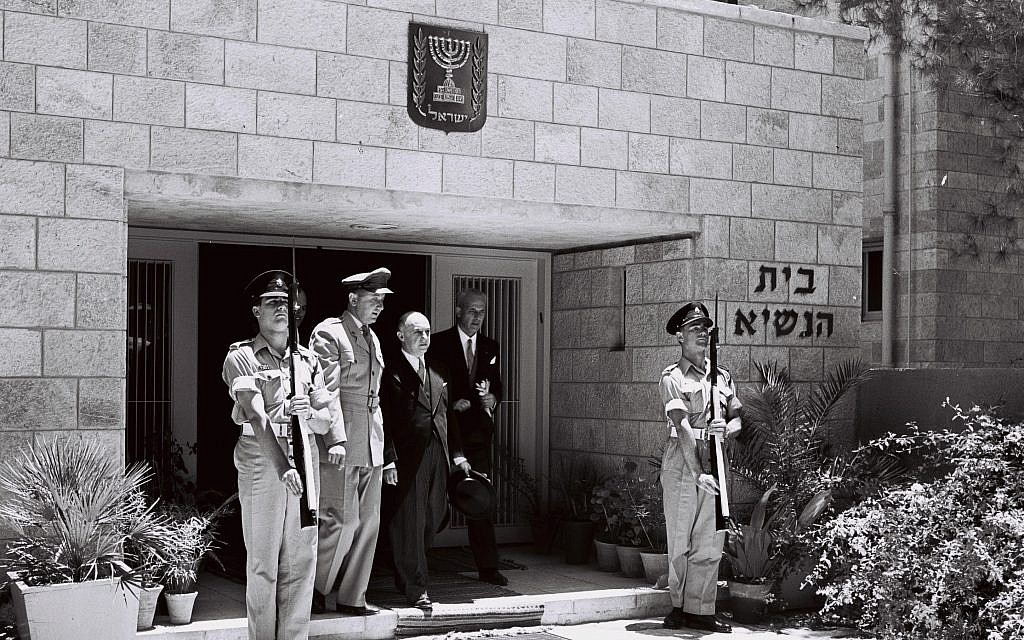 On Sunday, Guatemala became the first country after the US to announce its intention to move its embassy in Israel to Jerusalem, a move seen as tantamount to recognizing the city as Israel’s capital, though President Jimmy Morales’s statement included no explicit recognition.

Predictably, the Central American nation’s decision was castigated by the Palestinians and other Arab states and hailed in Israel as an act of deep friendship that marked the beginning of a new trend. Neighbor Honduras is said to be next in line. Like Guatemala, it also voted last week against the United Nations General Assembly resolution condemning the US’s December 6 decision to recognize Jerusalem as Israel’s capital and move its embassy there.

But what prompted a relatively small nation far removed from the Middle East and its problems to be the first to take the plunge after the US?

There are several reasons for Guatemala’s dramatic step. The country’s well-established historic friendship with Israel and ongoing deep security and trade ties are one key part of the story. The personal character of the country’s current leader is the other.

Seventy years ago, Guatemala’s ambassador to the UN, Dr. Jorge Garcia Granados, a member of the United Nations Special Committee on Palestine, played a crucial role in convincing Latin American countries to vote in favor of General Assembly Resolution 181, which called for the partition of Mandatory Palestine into a Jewish state and an Arab state. 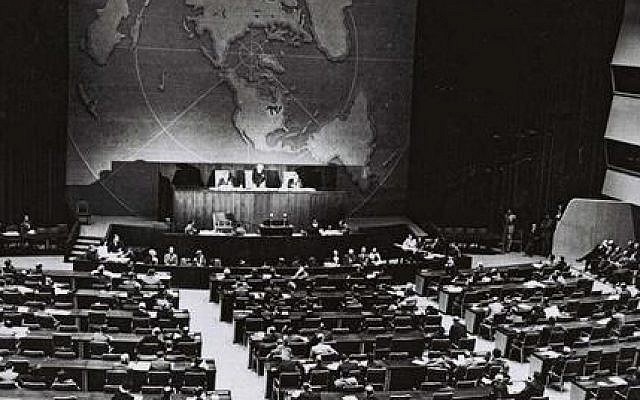 “It could be that without Guatemala, the resolution on that fateful day would not have passed, and history would be very different,” Knesset Speaker Yuli Edelstein told Morales during his November 2016 visit to Israel.

At the time, Prime Minister Benjamin Netanyahu recalled that he had grown up in Jerusalem near a street named after Morales’s country. “In just about every town in Israel there is a Guatemala Street because we remember Guatemala’s friendship and the friendship and leadership of your UN ambassador at the time of the decision on the Partition Resolution, and so Guatemala was etched into our hearts then,” he said.

Guatemala was one of the first countries to recognize the nascent State of Israel in 1948, and the friendship has remained strong ever since. 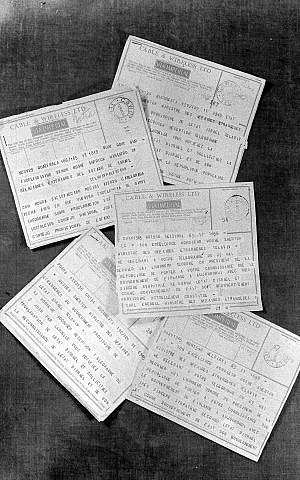 Telegrams of recognition of the State of Israel sent by Guatemala, Finland and Romania (courtesy GPO)

In the 1970s, Israel was said to have assisted the military juntas ruling Guatemala a great deal in the area of counterinsurgency, providing them with advice and equipment.

“Then the Guatemalan chief of staff, Kjell Laugerud Garcia, visited Israel and met with Defense Minister Moshe Dayan and other Israeli military officials. Laugerud Garcia expressed Guatemala’s interest in procuring armaments and military communications equipment. Later that year, the two countries signed their first cooperation agreement, though specifics were not made public,” she wrote.

Guatemala saw the Jewish state “as the world’s foremost practitioner of counterinsurgency” and looked to Jerusalem for expertise and arms, according to Rubenberg. “Israeli assistance began in 1971, but it took on increased importance after 1977, when the Guatemalan generals rejected US military aid in response to Carter administration pressures to remedy their gross human rights violations.”

Later that year, Israeli president Ephraim Katzir spent a week in Guatemala City, where he signed an agreement on military assistance.

Three years later, the Knesset passed a law declaring that united Jerusalem was Israel’s capital, leading the Security Council to call on all countries to withdraw their embassies from the city. Guatemala heeded the call and moved its embassy to Herzliya.

Relations with Israel remained strong, however. At least 300 Israeli security “advisers” were said to have operated in Guatemala in the early 1980s. “Israel is known to have intelligence teams, security and communications specialists, and military training personnel in Guatemala,” The New York Times reported at the time, though Israeli diplomats denied such claims.

Ties were also strong in the fields of civilian technology and tourism, among others. 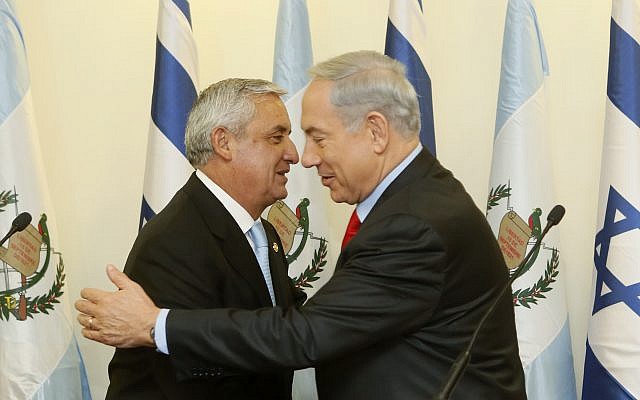 In December 2013, Otto Fernando Perez Molina became the first president of Guatemala to visit Israel. “Guatemala did participate in the foundation of Israel, so that has led the foundations for a tradition and the unity between our two peoples,” he told Netanyahu at the time.

Fast forward to 2015, when Morales — a former comedian who’d never held political office — won the country’s presidential elections with 67 percent of the votes. Morales, a devout Evangelical, has been called “the Donald Trump of Guatemala.” In 2016, Guatemala received nearly $300 million in aid from the US.

Morales, who called his country’s relationship with Israel “excellent,” has been supportive of many of the current US administration’s policies, including Trump’s plan to build a border wall with Mexico, and, of course, his plan to recognize Jerusalem as Israel’s capital. 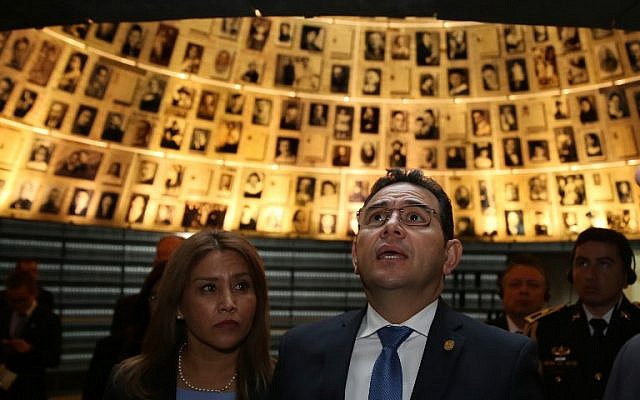 On his visit to Israel last year — during which he received an honorary doctorate from the Hebrew University of Jerusalem — he announced his hope to strengthen bilateral cooperation in many fields.

“Guatemala has a special relationship with Israel, and we know we can continue to work together: in partnership and hand in hand,” he told President Reuven Rivlin in Jerusalem. “During our visit we hope we will be able to enjoy Israel’s rich culture and history, and learn from you how to improve in the areas of agriculture, husbandry, and technology — areas in which Israel excels.”

(THIS ARTICLE IS COURTESY OF CBS NEWS)

GUATEMALA CITY — Guatemala’s president announced on Christmas Eve that the Central American country will move its embassy in Israel to Jerusalem, becoming the first nation to follow the lead of U.S. President Donald Trump in ordering the change.

Guatemala was one of nine nations that voted with the United States and Israel on Thursday when the U.N. General Assembly overwhelmingly adopted a non-binding resolution denouncing Trump’s recognition of Jerusalem as Israel’s capital.

Trump didn’t set any timetable for moving the U.S. Embassy from Tel Aviv to Jerusalem, and neither did Guatemalan President Jimmy Morales.

In a post on his official Facebook account Sunday, Morales said that after talks with Israeli Prime Minister Benjamin Netanyahu, he decided to instruct Guatemala’s foreign ministry to move the embassy.

Guatemala and Israel have long had close ties, especially in security matters and Israeli arms sales to Guatemala.

No other country has their embassy for Israel in Jerusalem, though the Czech Republic has said it is considering such a move.

Trump upended decades of U.S. policy with his Dec. 6 announcement that he was recognizing Jerusalem as Israel’s capital. Though Trump said he was merely recognizing reality and not prejudging negotiations on the future borders of the city, Palestinians saw the move as siding with Israel on the most sensitive issue in the Israel-Palestinian conflict.

“I have determined that it is time to officially recognize Jerusalem as the capital of Israel,” Mr. Trump said in his announcement.

For more than two decades, Mr. Trump said that previous presidents had signed a waiver to delay moving the U.S. embassy in Israel from Tel Aviv to Jerusalem, but said that “we are no closer to a lasting peace agreement between Israel and the Palestinians.”

“While previous presidents have made this a major campaign promise, they failed to deliver,” he said. “Today, I am delivering.”

Mr. Trump said that he also directed the State Department to begin the process of moving the U.S. embassy from Tel Aviv to Jerusalem, but he will sign a waiver that will delay the move in order to avoid significant funding cuts. Officials said that it was not possible to move the embassy to Jerusalem immediately, however, and it could take “a matter of some years.”

Israel claims all of Jerusalem as its capital, while the Palestinians claim the city’s eastern sector, which was captured by Israel in 1967 and is home to sensitive religious Jewish, Muslim and Christian sites. Many governments have long said that the fate of Jerusalem must be resolved through negotiations.

Trump’s announcement has set off weeks of clashes between Palestinian protesters and Israeli security forces that have left 12 Palestinians dead.

Netanyahu has predicted others would follow the U.S. lead. He has made great efforts to reach out to Latin America in recent years as part of a campaign to counter longstanding support for the Palestinians at the United Nations.

In remarks at his weekly meeting of the Likud party faction in the Knessert, Netanyahu thanked Guatemala’s president.

The resolution passed by the General Assembly declared the U.S. action on Jerusalem “null and void.” The 128-9 vote was a victory for Palestinians, but fell short of the total they had predicted. Thirty-five nations abstained and 21 stayed away from the vote.

“It’s a shameful and illegal act that goes totally against the wishes of church leaders in Jerusalem,” the ministry said in a statement.

Jordan’s minister of foreign affairs also said on Twitter that his country rejects the move.

© 2017 CBS Interactive Inc. All Rights Reserved. This material may not be published, broadcast, rewritten, or redistributed. The Associated Press contributed to this report.
Featured in Politics