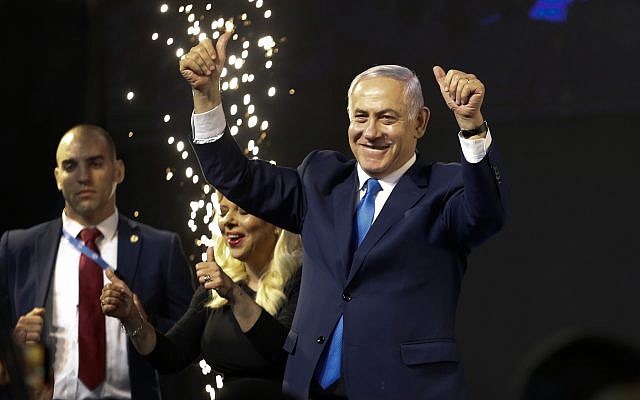 Prime Minister Benjamin Netanyahu was confirmed as the big winner of Israel’s general elections on Thursday night, when the Central Elections Committee published the completed tallies of Tuesday’s election, a full 60 hours after the polling stations closed.

The delay was caused by extra time spent Thursday checking and rechecking the “extra” votes cast by soldiers, diplomats and other absentees, which led to adjustments to the tentative results that had been issued early Wednesday. Even when releasing these ostensibly final tallies, however, the Supreme Court justice overseeing the elections said they were not official, and reserved the right to amend them before they are formally handed to the president on April 17.

With all of the votes counted, checked and rechecked, Netanyahu’s Likud party edged past its rival Blue and White party with 26.45 percent of the vote to win 36 seats in the 120-seat Knesset, gaining one more seat in the adjusted final tally. The ultra-Orthodox United Torah Judaism party dropped a seat, from Wednesday’s tentative eight to seven. Benny Gantz’s centrist Blue and White faction was confirmed at 35 seats, 26.11% of ballots.

Blue and White had formally conceded the election on Wednesday.

The bloc of Likud and its ultra-Orthodox and right-wing allies finished with 65 seats, compared to 55 for the center, left and Arab parties, giving Netanyahu a clear path for building a majority coalition.

The results also confirmed that Naftali Bennett and Ayelet Shaked’s New Right party narrowly failed to garner enough support to win any seats, ending up with 3.22% of the votes cast nationwide; the minimum threshold for Knesset representation is 3.25%. New Right had pinned its hopes on the soldiers’ votes elevating it into the Knesset for the minimum four seats, and sources in the party challenged the count during Thursday when it emerged that it had fallen short.

New Right said after the completed tallies were released at midnight that it was “not giving up” and was not convinced that the published totals were accurate. UTJ said it would appeal against the results.

On the right, Aryeh Deri’s ultra-Orthodox Shas party wound up as the third-largest Knesset faction with eight seats, followed by UTJ with its seven, the Union of Right-Wing parties won five, Yisrael Beytenu won five, and Kulanu won four.

On the other side of the spectrum, Arab party Hadash-Ta’al won six seats, the Labor party crashed to a record low of six, Meretz won four seats, and the second Arab party, Ra’am-Balad, also won four.

Likud’s 36 seats was the party’s best result since the 2003 election (when it won 38 seats under Ariel Sharon), and its best under Netanyahu. 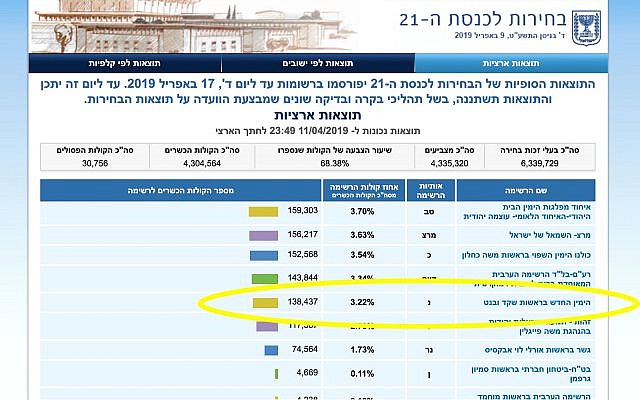 The vote count was plagued by controversy.

The Central Elections Committee’s website on Thursday morning erroneously stated that New Right had crossed the electoral threshold, before officials clarified that the website was inaccurate. The inaccurate figure remained on the site all day, however, until it was finally amended shortly before the completed figures were released at midnight. 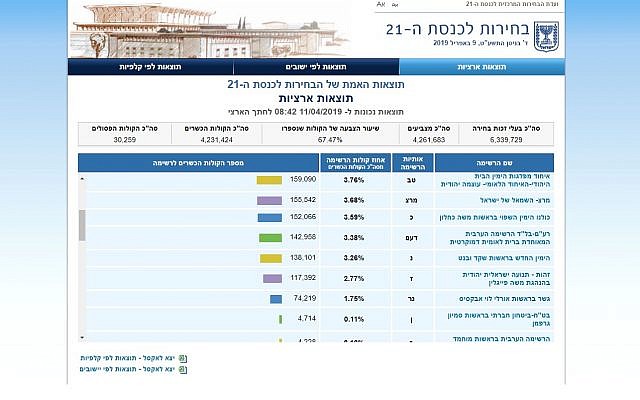 Screenshot from the Central Elections Committee website showing the New Right party with 3.26% of the vote on Thursday late morning, April 11, 2019. The Committee said this information was erroneous and that the New Right had actually won only 3.22% of the vote. It said the site was not showing the correct number of total votes counted, and was thus displaying inaccurate figures for all parties.

United Torah Judaism and the New Right late Thursday had called for a delay in the publication of the election results. The New Right said the party had received over 1,000 complaints about ballot irregularities, while UTJ said mistakes had been recorded at five polling stations in ultra-Orthodox areas.

Additionally, Meretz accused United Torah Judaism of interfering in the count on Thursday to try to steal a seat. Meretz, according to Thursday night’s tally, ended up only a few hundred votes short of winning a fifth seat.

Snafus on the official website also included displayed turnout rates of over 100 percent in some areas.

Justice Hanan Melcer, head of the Central Elections Committee, acknowledged that erroneous data had been registered on the committee’s computers, leading to a discrepancy between official results and those posted to the official website, but said all such issues had now been resolved.

Nonetheless, when announcing the completed results, Melcer said they were still subject to possible change before they are submitted to President Reuven Rivlin on Wednesday, April 17.

“We retain the right,” he said in a letter to the representatives of the Knesset slates that ran in the elections, “to examine the results using additional means at the committee’s disposal… so that they are still subject to changes and adjustments.”

Melcer said he rejected the last-minute appeal by the New Right and United Torah Judaism parties to hold off on publishing the results, in part because they are not fully official until they are presented to the president and thus in principle subject to change. 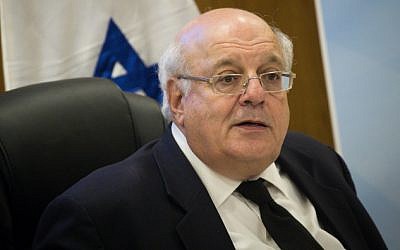 Justice Hanan Melcer, chairman of the Central Elections Committee for the 21st Knesset, attends a committee meeting at the Knesset, April 3, 2019. (Yonatan Sindel/Flash90)

Speaking to journalists at the Knesset earlier, Melcer stressed there was “no fault or issue” in tallying the votes.

Melcer downplayed the computer glitches at a press conference. He said the errors on the site were the result of a software problem that prevented the site from displaying the vote tallies in real time, and stressed the erroneous data displayed on the website was not the result of a cyberattack. (Ahead of the elections, the Shin Bet security agency had warned that a foreign power would seek to meddle in the elections.)

In a statement, the committee said: “Three glitches were found in the data transfer. The problem is not with the count but with entering figures into the system. Some of the figures were recorded by the system and some were not.”

On Thursday night, New Right party put out a statement quoting Justice Melcer and stating that “the results as they were published are not final.”

“We would expect the media to show a bit more gravitas in its reports,” the party said. “As we have said, we are not giving up… We will accept the voter’s decision, but will not rest until we find out what that decision truly is.”

United Torah Judaism said it would appeal the results.

Prime Minister Benjamin Netanyahu, briefing reporters during a state visit to the Netherlands, claims that the Palestinian Authority celebrates terror and refuses to countenance Israel’s existence.

“The Palestinians want Acre, Jaffa and Tel Aviv,” he says, according to quotes reported by Israel National news and confirmed by Netanyahu’s spokesman. “The Palestinians and [PA President Mahmoud] Abbas won’t agree to the existence of Israel. The Palestinians celebrate murderous terror around the world and in Israel, they name their streets after murderers,” he says.

While Abbas has refused Netanyahu’s demand that he recognize Israel as a Jewish state, the PA has recognized Israel and regularly called for a peace deal based on a two-state solution.

Netanyahu also claims that settlements are not at the heart of the conflict.

“Their problem is not the West Bank, it’s our very existence,” he says.

In a meeting with Dutch lawmakers, Netanyahu says that they have Israel to thank for their safety.

(This article is courtesy of Reuters News Agency) 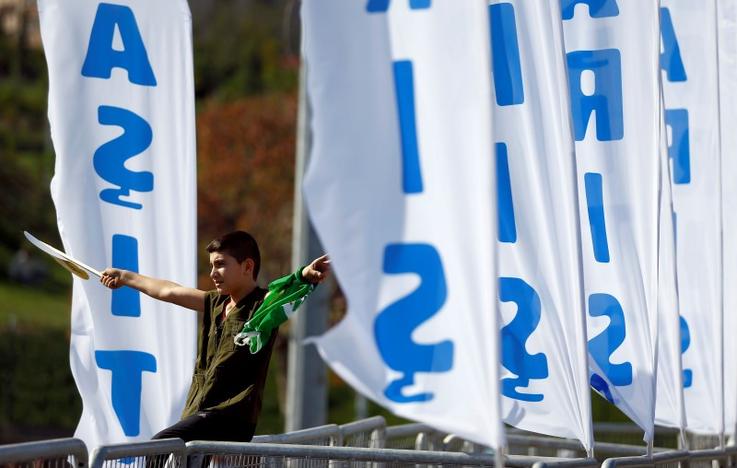 A demonstrator reacts during a peace rally to protest against Turkish military operations in northern Syria, in Istanbul, Turkey, September 4, 2016. REUTERS/Osman Orsal
By Hamdi Istanbullu and Melih Aslan | ISTANBUL

Turkey will never allow the formation of an “artificial state” in northern Syria, Prime Minister Binali Yildirim said on Sunday, referring to the U.S.-backed Kurdish fighters whose advance Ankara is now aiming to stop.

Turkey and its allies opened a new line of attack in northern Syria on Saturday, as Turkish tanks rolled across the border and Syrian fighters swept in from the west to take villages held by Islamic State and check the advance of the U.S.-backed Syrian Kurdish YPG.

Turkey launched its operation in Syria, called Euphrates Shield, on Aug.24 to drive out Islamic State and stop the YPG militia, fearing its growing control of northern Syria.

“We will never allow the formation of an artificial state in the north of Syria,” Yildirim said in a speech in the southeastern city of Diyarbakir, where he announced an investment programed to rebuild parts of the largely Kurdish region that have been destroyed by security operations.

“We are there with Euphrates Shield, we are there to protect our border, to provide for our citizens safety of life and property, and to ensure Syria’s integrity.”

Turkey is fighting a three-decade-old Kurdish insurgency in the southeast and fears that the YPG’s advances will embolden militants at home. Turkey considers the YPG a terrorist organization and an extension of the outlawed Kurdistan Workers Party (PKK).

Yildirim’s comments echoed those of President Tayyip Erdogan at the G20 gathering of world leaders in China, who told reporters following a meeting with U.S. President Barack Obama: “It is our wish that a terror corridor not be formed across our southern border”.

Erdogan has repeatedly said that Turkey’s allies should not be making a distinction between Islamic State and the YPG as both groups pose a threat to Turkey.

The warplanes hit three targets in the al-Kaldi area and another in the Wuguf region, Anadolu said, citing the sources.