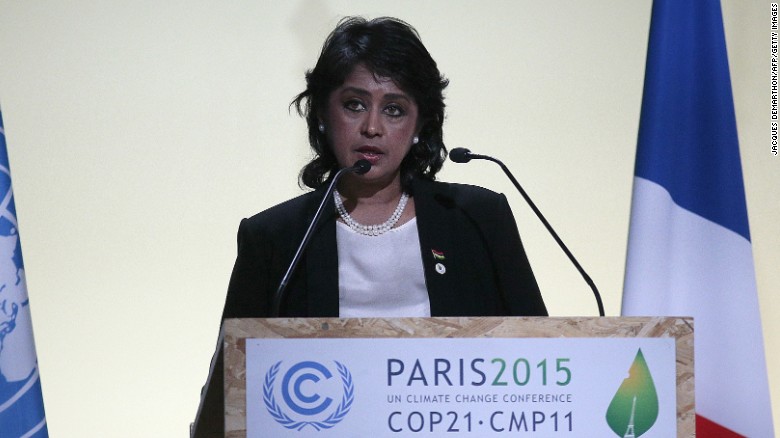 Mauritius President Ameenah Gurib-Fakim delivers a speech in Paris in 2015.

Ameenah Gurib-Fakim will step down over allegations she misused a credit card given to her by a charity.
Prime Minister Pravind Jugnauth said Gurib-Fakim, who was facing impeachment proceedings over the alleged expense irregularities, had agreed to step down after the country’s 50-year independence celebrations on March 12.
“The President of the Republic told me that she would resign from office and we agreed on the date of her departure,” Jugnauth told reporters in Port Louis, the country’s capital.
“The interests of the country come first,” he said.
Attempts to obtain comment from Gurib-Fakim and her office were not immediately successful.
The president was left fighting for her political career after local media published a report that she had paid for personal expenses on a credit card given to her by London-based charity Planet Earth Institute (PEI) in 2016.
The report alleged that Gurib-Fakim had spent thousands of dollars on the card on clothing and luxury items.
She has denied any wrongdoing and said she had refunded all the money.
“I do not owe anything to anybody. Why is this issue coming up now almost a year later on the eve of our independence day celebrations,” she said on March 7, Reuters news agency reported.
The Planet Earth Institute is accredited to the United Nations Environmental Program and its mission is the “scientific independence of Africa.” When contacted, a spokeswoman for PEI declined to comment.
Gurib-Fakim was appointed to the PEI board in 2015, but resigned two years later in 2017.
She is internationally renowned and is feted on the world stage, and is the recipient of the L’Oréal-UNESCO award for women in science.
Despite her huge international profile, commentators say Gurib-Fakim’s popularity closer to home was waning.
Mauritians increasingly saw her as a “president in transit,” because of her frequent trips abroad, said Rabin Bhujun, managing editor of ION News, a digital news platform in the country.
“How does it benefit the country for her to be on the Forbes list? This is an important factor which encouraged the government to get rid of her.
They felt she wasn’t a heavyweight in politics and had no problem sacking her,” Bhujun said.