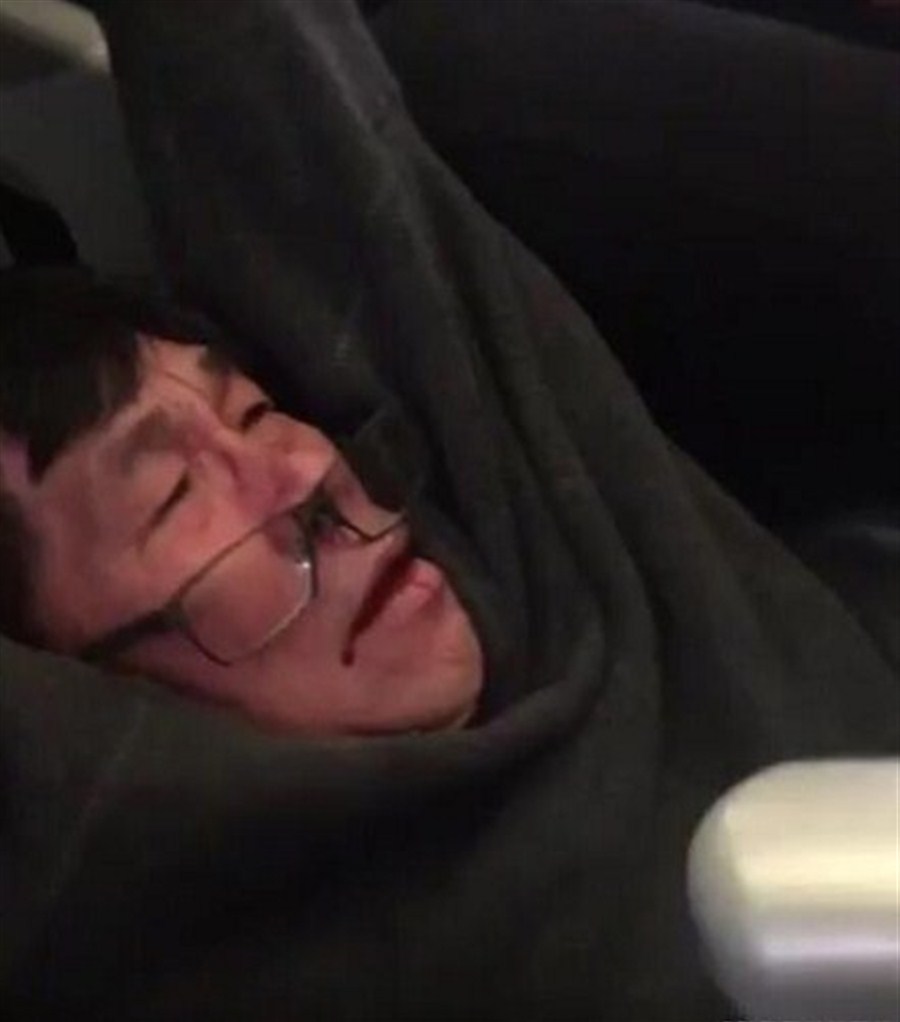 A PASSENGER dragged from a United Express flight suffered “significant” concussion and a broken nose, and he lost two front teeth, one of his lawyers said yesterday.

Dr David Dao has been discharged from hospital but he will require reconstructive surgery, said attorney Thomas Demetrio, whose firm is representing the 69-year-old Kentucky physician.

Dao was removed from the plane on Sunday after he refused to give up his seat on the full flight from Chicago to Louisville.

One of Dao’s five children, Crystal Pepper, said the family was “horrified, shocked and sickened” to learn and see what happened. She said seeing her father removed from the flight was “exacerbated” by the fact it was caught on video and widely distributed.

Demetrio said he will likely file a lawsuit on Dao’s behalf, adding that airlines — and United in particular — have long “bullied” passengers.

The video of the passenger being dragged by an officer from the flight also shone an unwanted spotlight on the little-known police force that guards Chicago’s two main airports.

Chicago’s aviation officers are not part of the regular police force, unlike in many other big cities. They get less training than regular officers and can’t carry firearms inside the airports. Three are now on leave amid outrage over how they treated the passenger.

Cellphone footage of the confrontation “really has put it (the force) at risk,” Alderman Chris Taliaferro said on Wednesday, the day before aldermen were due to grill United and the Chicago Aviation Department about why Dao was yanked out of his seat at O’Hare Airport.

The city council is looking for answers about the embarrassing video seen around the world. At the top of the list of questions is whether the airport officers even had the legal authority to board the plane, said Alderman Michael Zalewski, who leads the council’s aviation committee.

“They are allowed in the terminal and baggage area, but my understanding is they may not be allowed on a plane,” he said. Zalewski also said he is not sure if the officers have the authority to make arrests or if they are only authorized to write tickets.

An aviation department spokeswoman did not respond to questions about the duties of the police force, but Zalewski said the agency’s commissioner was to be asked about them.

The department will also be asked about training. Zalewski said airport officers receive four months of training compared with the six months cadets must complete before joining the city’s police department.

“We don’t know what that two-month gap means,” he said, adding that he will ask if the airport officers receive the same kind of training in de-escalating tense situations that city police officers get.

The roughly 300 aviation police officers earn between US$50,000 and US$88,000 a year and cost the city about US$19 million a year. They are city employees but not members of the Chicago Police Department.

The city also assigns approximately 200 regular police officers to the two airports, all of them armed.

One possibility for reform could be to disband the aviation force in favor of more city police officers, though Taliaferro thinks that is unlikely.

Outrage spread to Vietnam on Wednesday over United Airlines’ handling of a passenger dragged from his seat after it emerged that the 69-year-old U.S. doctor was Vietnamese by birth.

Although United Airlines has no direct flights to Vietnam, there were widespread calls on social media for a boycott after video showed a bloodied David Dao being yanked out of the plane by airport security on Sunday to make way for United employees.

The ire in Vietnam grew quickly after it was reported that Dao’s origins were not in the Southeast Asian country’s old enemy, China, as many had at first assumed.

Vietnamese also fumed at allegations over Dao’s past reported in the United States as irrelevant and possibly racist.

There was no immediate comment from the government or in state media.

Video showing Dao being pulled from United Airlines Flight 3411 at Chicago O’Hare International Airport on Sunday went viral and the worldwide backlash hit the airline’s share price and prompted an apology from the company chief executive.

Kentucky’s medical board website shows that a doctor David Dao graduated in 1974 in Ho Chi Minh City – then known as Saigon and the capital of U.S.-backed South Vietnam before its defeat and the reunification of Vietnam under communist rule a year later.

Around that time, Dao left for the United States, according to U.S. media and Vietnamese websites.

Vietnamese media said that Dao was also a songwriter and crooner of soulful ballads – including one about the memory of rain falling in Saigon.

Reports in U.S. media of an offence that had led to Dao losing his medical license in 2003 were dismissed in Vietnam as a probable smear campaign.

“Dr. Dao didn’t do anything wrong on that flight and that’s the main thing,” wrote Clarence Dung Taylor in a post that had more than 4,000 likes.

The attitude to the case shifted dramatically in Vietnam once it was reported that Dao was not from China – an ancient enemy with which Vietnam continues to have a maritime dispute over the South China Sea.

When initial reports had suggested the man being dragged from the plane was Chinese, some Vietnamese had posted strongly unsympathetic comments about him.

“So funny,” wrote Bui Nguyen Trong Nghia. “Now they know he’s Vietnamese, most people stand up to advocate. Whether it’s Vietnamese or Chinese, there’ll be discrimination as we’re Asian.”