HONG KONG — The arrests on Friday of prominent democracy lawmakers and activists in Hong Kong reflect a tactical escalation by China’s leaders to curb the recent street violence, but which could prolong the protests for many months.

Officials in Beijing, along with the Hong Kong government that answers to them, have decided on a policy of stepped-up arrests of demonstrators, who would be publicly labeled the most radical of the activists, according to Hong Kong cabinet members and leaders of the local pro-Beijing establishment.

In interviews over the past two weeks, these local political figures stressed that China wants the Hong Kong police to carry out the arrests — not Chinese soldiers, whose intervention in the city’s affairs would be unprecedented.

[Tens of thousands of demonstrators returned to the streets on Saturday, despite a police ban.]

Beijing has also ruled out making concessions to the demonstrators, they said. With protest leaders also vowing not to back down, the officials acknowledged that the price of the strategy could be months of acrimony, possibly stretching into 2020.

“I hope we can start the process of reconciliation before the end of the year,” Ronny Tong, a member of Hong Kong’s Executive Council, or cabinet, said in an interview last week. 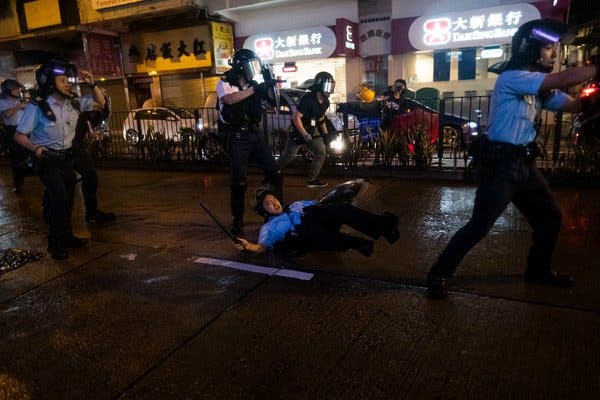 Beijing and Hong Kong officials are betting that the protests will gradually die down as the police detain the most hard-line demonstrators, and that public opinion will turn more decisively against the use of violence, said Lau Siu-kai, a longtime adviser to the Chinese government on Hong Kong policy.

The Hong Kong police said on Friday that they had arrested more than 900 people this summer in connection with the protests. Some of the local political figures estimated that as many as 4,000 protesters were seen by the authorities as radicals, but that it was unclear how many would eventually face legal action.

The police, who have been accused by demonstrators and international rights groups of using excessive force, have “not used their capacity to suppress the protests” until very recently, said Mr. Lau, who ran the city’s policy planning agency for a decade until 2012.

With broad public backing from mainland China, “the mood of the police was lifted up and they became even more ferocious in putting down the protests,” said Mr. Lau, who is now vice chairman of the Chinese Association of Hong Kong and Macau Studies, a semiofficial advisory body set up by Beijing.

With China’s hard-line leader, Xi Jinping, dealing with a trade war with the United States, a strategy of attrition in Hong Kong could be seen as preferable to a rash approach that might risk spiraling into a major crisis.

But it is far from clear how much success the authorities will have with their strategy of arresting protesters, resisting concessions and delaying negotiations. The arrests have begun to draw criticism from around the world. 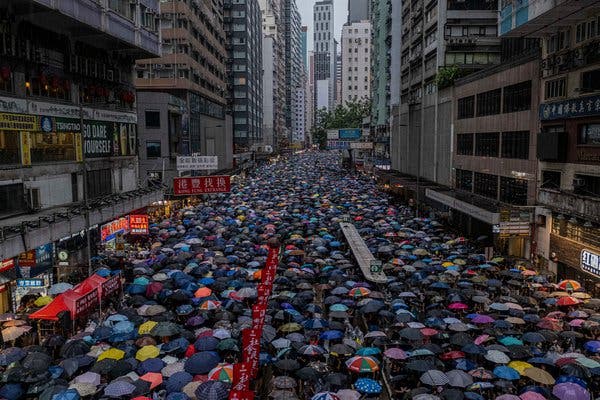 The handful of democracy activists and lawmakers who were arrested on Friday have relatively moderate reputations. They include Joshua Wong, who rose to global prominence with the so-called Umbrella Movement protests in 2014, and who has publicly called this summer for protesters not to use violence. Mr. Wong and another activist, Agnes Chow, were later released on bail.

Demonstrators have contended that at least some of the violence attributed to them may have been instigated by undercover police agents. The police have acknowledged infiltrating the protests with officers dressed to look like demonstrators.

Protesters also suspect the authorities of involvement in a spate of attacks on democracy activists by men armed with sticks, baseball bats and even meat cleavers. Similar incidents in Hong Kong over the years have been linked to organized crime groups, which have a history of ties to Beijing.

The mutual distrust has become so great that not only are the authorities and pro-democracy activists not holding talks, but the informal contacts that once existed between the government and the older generation of activists — who, themselves, are mistrusted by many of the younger protesters — have essentially come to a halt.

Each side has worried that any effort to quietly negotiate a deal would be torpedoed by leaks, embarrassing anyone who might try to strike a compromise. From the government’s point of view, those fears were realized when Carrie Lam, the chief executive, met with local young people this week, only for a recording to be leaked to Apple Daily, a pro-democracy media outlet.

Democracy advocates consider Mrs. Lam a puppet of China’s leaders, but they have also ruled out talks with the Liaison Office, which represents Beijing’s interests in Hong Kong.

“This is the situation we are in: absolutely no back channel and total distrust between the two sides,” said Alan Leong, the leader of the Civic Party, one of Hong Kong’s largest pro-democracy parties.

“How would I in my right mind walk into the Liaison Office — that would upset the whole unity” of the democracy movement, he added.

The democracy advocates have agreed not to criticize the violent tactics of some of the younger protesters — a turnaround for many of the older activists, who have shunned violence since Britain returned Hong Kong to Chinese rule in 1997. Some pro-democracy lawmakers with decades-long track records of opposition to Beijing say they have been characterized as sellouts by hard-line protesters when they suggested compromising or refraining from violence.

“They will not listen to us, they think we are all outdated,” said Anson Chan, a longtime campaigner for democracy who was Hong Kong’s second-highest official in the years immediately before and after the 1997 handover.

On Tuesday, Mrs. Lam announced plans for a “platform for dialogue” to find a way out of the political quagmire. But she has sought to meet with neutral community leaders, not the opposition, and she has already ruled out accepting any of the protesters’ five demands, which include universal suffrage, amnesty for protesters and an investigation of the police’s conduct.

Given how polarized the city is now, it has been hard to find neutral figures with whom Mrs. Lam could meet, said Mr. Tong, the cabinet member, who is working on the matter for the chief executive. 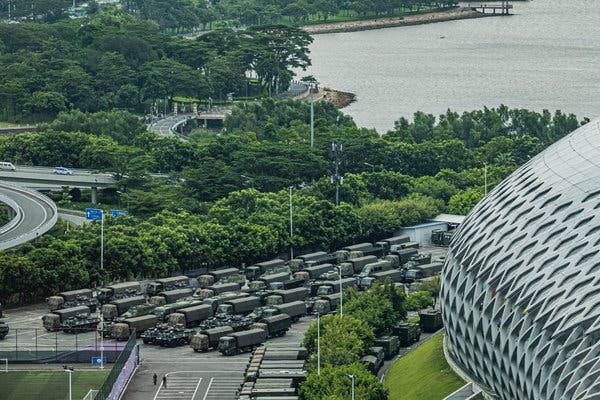 Mr. Lau, the adviser to Beijing, said that democracy advocates were overestimating the extent to which Chinese leaders worried about being embarrassed internationally by the protests.

He said they paid more attention to how events in Hong Kong were seen within mainland China, adding that public perceptions there of disorder in Hong Kong had led to a nationalistic wave of support for Beijing.

The Chinese government has pushed those perceptions itself, through the state media’s misleading coverage of the protests.

The Chinese military’s police conducted large exercises just across the border from Hong Kong this month as a show of force. But those exercises were aimed at showing that China is prepared for any contingency, and were not a preamble to any plan for actual deployment in Hong Kong, Mr. Lau and others familiar with the exercises said.

The maneuvers followed plans, drafted years ago, for clearing hostile crowds who establish prolonged control of large urban areas — a tactic that Hong Kong protesters used for months in 2014, but have largely avoided this year.

Martin Lee, a veteran pro-democracy campaigner and founder of the Hong Kong Democratic Party, said that Beijing did not want anything to mar its Oct. 1 celebration of the 70th anniversary of the founding of the People’s Republic of China. Beijing “won’t allow bloodshed to happen in Hong Kong before then — after Oct. 1, beginning on the 2nd, I don’t know,” Mr. Lee said.

Keith Bradsher was the Hong Kong bureau chief of The New York Times from 2002 to 2016 and is now the Shanghai bureau chief. Follow him on Twitter: @KeithBradsher.

A version of this article appears in print on Aug. 31, 2019, Section A, Page 1 of the New York edition with the headline: From Beijing, More Arrests In Hong Kong. Order Reprints | Today’s Paper | Subscribe