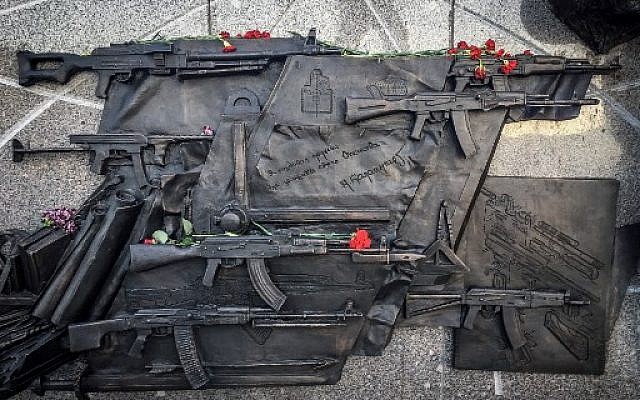 A sketch allegedly featuring the German StG44 rifle at a fragment of the newly unveiled monument to Mikhail Kalashnikov, the inventor of the AK-47 assault rifle, in downtown Moscow on September 22, 2017. (AFP/Mladen Antonov)

MOSCOW, Russia — Workers in Moscow on Friday erased the illustration of a gun from a freshly inaugurated monument of Mikhail Kalashnikov, inventor of the legendary AK-47 assault rifle, after it was found that the drawing was of a Nazi weapon.

“We have checked the information about a mistake. It is confirmed. The sculptor, Salavat Shtsherbakoff, has acknowledged his mistake,” the state-supported Russian Military History Society, which backed the monument, told TASS news agency.

The erroneous drawing was of an StG44 — for Sturmgewehr (Storm Rifle), a name reputedly conferred by Hitler himself. It became the Nazis’ frontline weapon on the bloody Eastern Front.

A worker used an angle grinder to obliterate the offending depiction of the StG44, an AFP photographer saw. 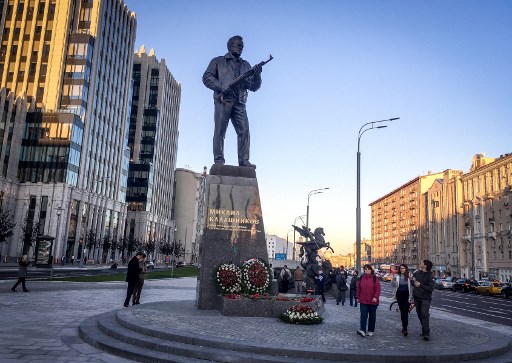 A general view of the newly unveiled monument to Mikhail Kalashnikov, the inventor of the AK-47 assault rifle, in downtown Moscow on September 22, 2017. (AFP/Mladen Antonov)

Kalashnikov was elevated to hero status in the Soviet Union for inventing a simple, rugged, reliable and easy-to-manufacture automatic weapon for the Red Army.

It entered service after World War II — the AK-47 comes from the Russian “Avtomat Kalashnikova 1947” — to became a standard weapon for Soviet forces and revolutionary movements around the world. Its image has also become notoriously intertwined with terrorism and massacres.

Acclaim of Kalashnikov continued after the fall of the Soviet Union, culminating with a project to erect a statue in his honor after he died in 2013.

The seven-meter (23-feet) -high statue, located in a central thoroughfare was unveiled to great pomp on Tuesday, with goose-stepping troops and Russian officials in attendance. Orthodox priests sprinkled it with holy water. 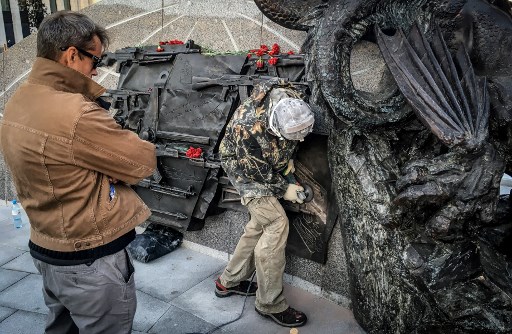 A man uses an angle grinder as he removes a sketch allegedly featuring the German StG44 rifle from a fragment of the newly unveiled monument to Mikhail Kalashnikov, the inventor of the AK-47 assault rifle, in downtown Moscow on September 22, 2017. (AFP/Mladen Antonov)

Culture Minister Vladimir Medinsky praised the inventor and called the rifle — which has been reproduced an estimated 100 million times worldwide — a “cultural brand for Russia.”

The statue itself accurately features Kalashnikov clutching his invention. The StG44 was featured in an engineer’s drawing, located on part of the memorial that traces the history of the AK47.

The change to the statue coincided with the public unveiling in Moscow on Friday of a bronze bust of Stalin, fuelling concerns that the authorities are seeking to whitewash the Soviet dictator’s bloody history. 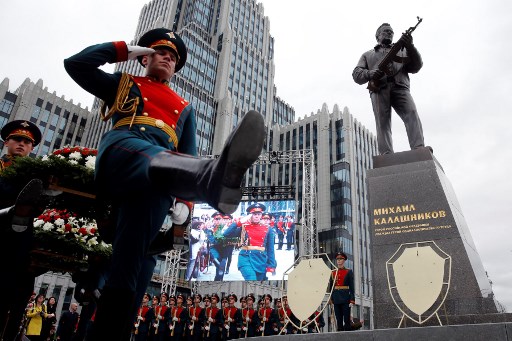 Honor guards march during the unveiling ceremony of a statue of Mikhail Kalashnikov, the Russian inventor of the fabled AK-47 assault rifle, in downtown Moscow on September 19, 2017. (AFP/Maxim Zmeyev)

Stalin’s bust was one of seven sculptures spanning the history of the Soviet Union from Lenin to Mikhail Gorbachev.

They are the latest addition to a recently-opened “Alley of Rulers” that already features 33 Russian rulers.

The force behind the sculptures is the Russian Military History Society, founded by President Vladimir Putin and whose current president is Medinsky, known for fiercely nationalist views.