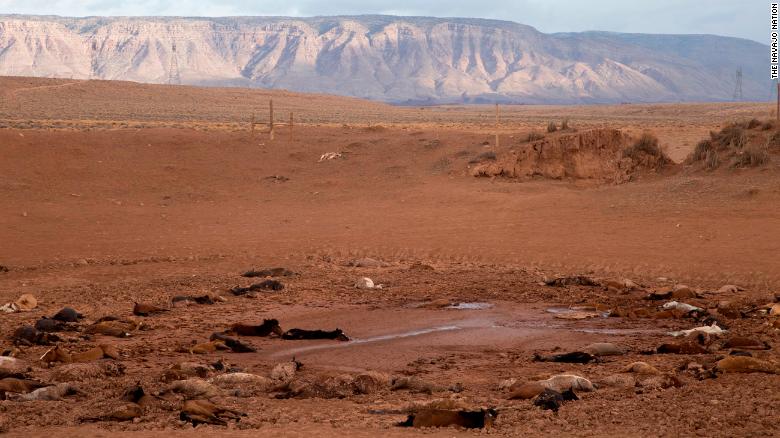 Approximately 191 feral horses were found dead at a stock pond on Navajo land in Arizona.

(CNN)Approximately 191 feral horses have been found dead in a stock pond on Navajo land in northern Arizona, according to Navajo leaders, who attributed the death to ongoing drought and famine.

“These animals were searching for water to stay alive. In the process, they unfortunately burrowed themselves into the mud and couldn’t escape because they were so weak,” Navajo Nation Vice President Jonathan Nez said in a statement on Thursday.
Some of the horses were found thigh- to neck-deep in the mud at the stock pond in Gray Mountain, according to Nina Chester, a staff assistant for the office of the president and vice president.
Hydrated lime will be spread over the animals to speed up decomposition. They will be buried on-site, the statement said.
The Navajo community in Arizona has had to contend with a growing feral horse population ofabout 50,000 to 70,000, according to the statement.
“This tragic incident exemplifies the problem the Navajo Nation faces in an overpopulation of feral horses,” said Navajo Nation President Russell Begaye.
Horses dying at the Gray Mountain stock pond isn’t new, Navajo officials said. It’s a seasonal issue.
An intense drought hit the southwestern United States this year, creating dry conditions in northern New Mexico and southwestern Arizona, according to CNN affiliate KNXV-TV. A drought emergency was declared for the Navajo Nation in March.
Drought and dryness as of Thursday was affecting more than 6 million people in Arizona, which is almost the entire population of the state, according to the The National Oceanic and Atmospheric Administration’s National Integrated Drought Information System program. About 50% of the state is under extreme drought conditions.

(THIS ARTICLE IS COURTESY OF NATIVE NEWS ON LINE)

WINDOW ROCK—It was recently announced that Elouise Cobell will be one of 21 recipients to receive the Presidential Medal of Freedom at a White House ceremony on November 22, 2016.

The Blackfeet community leader spent nearly 15 years advancing a class-action lawsuit on behalf of 500,000 Indians against the Interior Department. The lawsuit claimed that the Interior Department had stolen or squandered billions of dollars in royalties owed to individual tribal members in exchange for oil, gas and other leases.

The case was settled in 2009 when the Interior Department agreed to the $3.4 billion settlement.

“The Office of the President and Vice President commend President Obama for recognizing the critically important work of Elouise Cobell who demonstrated in court the mismanagement of royalties that were owed to tribal nations,” President Russell Begaye said. “Her work was exemplary in pushing the federal government toward acknowledging and reconciling their profound mismanagement of money that should have gone to tribes or trust beneficiaries. Her work has greatly impacted and benefited many tribal nations.  For this, the Navajo Nation greatly supports her posthumous award of the Presidential Medal of Freedom.”

The Presidential Medal of Freedom is the nation’s highest civilian honor.