15 Killed in Airstrikes in Eastern Libya At least 15 people were killed, including women and children, in airstrikes on the eastern Libyan city of Derna late on Monday night, said a medical source.

The National Libyan Army has been besieging the city for months and has carried out intermittent airstrikes against it.

Military officials refused to comment on the latest strikes.

A resident of the city said that the shelling last about an hour and that they targeted the al-Dhahr al-Hamr neighborhood in southern Derna and the mountainous al-Fatayeh region, 20 kms away from the city.

The medical source said that at least 17 people were wounding in the strikes, adding that so far all victims were civilians.

The coastal city of Derna lies 265 kms away from the Egyptian border in the west. It is currently under the control of an alliance of extremists and former members of the “Shura Council of the Derna Mujahideen”.

The ISIS terrorist group captured Derma in late 2014, but the Council managed to expel it in the following year.

(CNN)The leader of the Islamic State of Iraq and Syria, Abu Bakr al-Baghdadi, seems to have broken his 11-month silence with a long audio message in which he mocks the United States, calls on jihadis to rally against the Syrian regime and insists that ISIS ‘remains’ despite its rapid loss of territory.

A spokesman with the US Office of the Director of National Intelligence told CNN: “We are aware of the audio tape purported to be of Abu Bakr al-Baghdadi and are taking steps to examine it. While we have no reason to doubt its authenticity, we do not have verification at this point.” 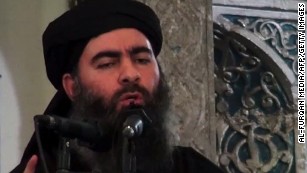 New details on the hunt for ISIS leader Baghdadi
The speech seems to have been recorded relatively recently, as it references North Korean nuclear threats against Japan and the United States, as well as Syrian peace talks — in which Russia, Turkey and Iran are trying to extend ceasefires across Syria.
The release appears to lay to rest claims by the Russian military that they had almost certainly killed Baghdadi in an airstrike near Raqqa on May 28. US officials say ISIS has largely been forced out of Raqqa as well as Mosul, and Baghdadi may be somewhere in the middle Euphrates River Valley.
That is an area that straddles Syria’s border with Iraq, to which much of the group’s leadership is thought to have relocated earlier this year.
A spokesman for the US-led coalition fighting ISIS said they were not aware of the audio recording. “This is the first I’ve heard about it,” US Army Col. Ryan Dillon, a spokesman for Operation Inherent Resolve, told reporters Thursday at the Pentagon by teleconference from Baghdad.
Dillon later added “without verifiable evidence of his death we have continued to assume he’s alive.” Dillon said he was “sure our people” are looking at the recording, and if there is any information in the recording as to his location “we may have folks moving in right now.” 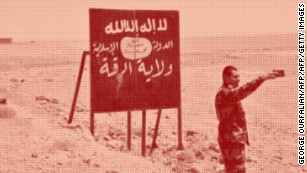 ISIS’ retreat accelerates, but reports of its demise are exaggerated
In his 46-minute message, Baghdadi urged fighters (“the mujahideen”) to persevere, and to show that the bloodshed in Mosul, Raqqa and elsewhere was not in vain “by clashing the shining swords and shedding filthy blood.”
He appealed for jihadi attacks worldwide, claiming that “America, Europe and Russia are living in a state of terror,” according to a translation provided by the SITE Intelligence Group, which tracks jihadi groups. Baghdadi also rallied Sunni Muslims against the Shia, saying that they would never accept “half-solutions” — especially after all the destruction and the gains they’ve made. This appears to be a reference to Iran’s growing reach across the region.
Scholar Hassan Hassan, who has written a book about the rise of ISIS, said in a tweet that a key theme of Baghdadi’s speech was that he sees ISIS’s fight as a “ceaseless war of attrition to deplete enemies.” In that regard, Baghdadi claims the US decision not to send ground troops to Syria as vindication of ISIS’s strategy. (In fact, the United States has several hundred combat troops in Syria.)
Baghdadi says the US suffers from fatigue and Russia has taken control of the Syria situation. Baghdadi also echoes the message of another ISIS leader, Abu Mohammad al-Adnani, who declared that holding territory mattered less than the will to fight. Adnani was killed in 2016.
In his speech, Baghdadi says that the prophet had not told his companions when or how Islam would be victorious, “so that they don’t make victory or defeat dependent upon losing territory or some of the believers being killed.”
Both US and Russian air power, as well as a variety of ground forces, are active in the area, but ISIS still holds some towns on the Euphrates.

(THIS ARTICLE IS COURTESY OF THE ‘ONLY LEBANON’ NEWS)

“During the Russian operations to eject the Syrian armed opposition groups from eastern Aleppo, the Russians expressed their fear through private channels from the possibility of transmission of “Mujahideen Chechnya” from Aleppo to Lebanon. There in the eastern districts of Aleppo dozens of Chechen jihadists involved within the “Aleppo local organizations,” has no organic link to “Ahrar al – Sham , ” or “Isl.

Russian intelligence began chasing them finally wary that they may be trying to get out of Aleppo in the direction of Lebanon, not to the countryside west of Aleppo under the paths accessible to the control of Russian-Syrian tight.

Moscow fears that the “jihadists” Chechnya in Syria, may prefer after losing a refuge Aleppo escape to a safe place is not for the Russians Regional eyes in it, and Lebanon is to be Bdelhm to move him instead of going to Idlib region and its countryside, which has Turkey harmonious militarily and politically this period with Russia, a big influence them, exposing them to the risk of extradition to Moscow.

This information sheds light on Lebanon as one of the candidate countries to continue because the destination subsidiary of terrorism UN takfiri cells, as sometimes “Square haven”, and at other times “Square clash” for the liquidation of Arsal and Qalmoun war accounts with the Lebanese army and Hezbollah, etc .. It may be also the time, according to the Russian fear, unintended Square jihadists from Amman, including Chechnya to filter the results of the battle of Aleppo with Russia in Lebanon accounts, or used yard assemble them and expressing to arrange for their return to their country.

Papers highlight the introduction of an international conference on the fight against terrorism, internationalist, that between 2011 and 2016, was settled by “terrorists Maolmo nationality”, Lebanon, and they have the extraordinary tasks. And indicates their presence to the operators for them to have a special look to the Lebanese arena, beyond it, “Square victories” Background to Syria, in the interest that a certified passages from Syria to the world and vice versa, and concentrated fear now is that the “terrorists globalized” in Syria (estimated to number between 10 and 15 alpha) may choose to Lebanon to assess it after their displacement from Syria, as the forms for them when having to get out of Syria, the same role that formed by Pakistan in relation to the “Arab mujahideen” after being forced to get out of Afghanistan, any yard assemble them in preparation for returning to their country by stealth or implementation of the liquidation of the account operations, and from which, against the interests of the forces that participated in the defeat of their project jihad in Syria. “

Offer a quick look at the regulations «jihadist» globalized names appearing in front of the Lebanese judiciary, whether Jahia or in absentia, since 2011 until 2016, Proceedings of the important implications:

The order seemed especially dangerous belonging to Yemeni nationality who, despite their association with factions operating in Syria, the fact that party affiliation has been linked to global takfiri operate across continents. The most prominent model for Yemeni jihadis who worked in Lebanon «Salim Abdul Karim Saleh» aka «Abu Turab», who was arrested on 10/7/2013 on charges of belonging to an armed organization and carry out terrorist acts.

Activities «Abu Turab», especially within the Roumieh prison, was the most prominent of its success has shown to be his employers have an important communication Bouklayahm capabilities, regardless of the places of their existence, as evidenced by its implementation (ie «Abu Turab») dangerous terrorist operations even during his detention in Roumieh prison the introduction of «material Alcarper» to prison, and his success in escaping from it.

We have adopted a «Daesh» since its appearance in Syria, and to a lesser extent «Nasra Front» Also, terrorists operating in Lebanon Maolim strategy every time you wanted to implement quality strikes do not polemical terrorist strikes.

These are usually people of Lebanese origin have Western nationalities for many years. And described as «strategic reserve terrorist qualitative» for «Daesh» or «victory» and their dispute. As an example of them, stand out French terrorist cell of Lebanese origin Fayez Youssef Bhoshran who tried to blow himself up in June 2014 during a raid Lebanese security «de Roy» hotel in the locality Raouche with the dawn of his companions actually themselves.

Second, the period is short adopted Lebanon «hotel» and «sanctuary» quiet for specialists codes communications and bombings manufacturing, and to the families factions terrorist leaders and Zana in Syria, in the forefront of «Daesh» and others, indicating that Lebanon is a rear bunker quiet cadres terrorist related capabilities distinctive and is required to maintain investment in the tasks of scientific production and innovative means of recruitment.

Iraqi temper Hamid Ibrahim al-Dulaimi, al-Baghdadi, the former wife and her daughter from him amounting to ten years old, lived in Lebanon for the purpose to hide. And also the Iraqi «Ziad Alolaan» He is looking for an electrical engineer of Baghdad, an expert manufacture of toxic gases and packing missiles and monitoring US movements around the world, use a remote place to Lebanon to carry out its missions.

The same applies to the Kuwaiti «Mohammed Al Dosari» and Tajkstani «Mohammed Patarrov» experts to establish links to the organization «young people across the world» innovative ways for the benefit of terrorist organizations, and Iranian Bishara Shirazi