63 arrested over riots in Hong Kong on Saturday

Hong Kong police said on Sunday that 63 people had been arrested during the riots on Saturday.

According to the police, 54 men and nine women, aged between 13 and 36, were arrested for offences including criminal damage, possession of explosives and offensive weapons, and unlawful assembly.

According to Tsui, two petrol bombs and lighters were found among the belongings of a 13-year-old suspect. A batch of petrol bombs were also seized by police on the platform of Prince Edward MTR Station.

In the above-mentioned cases, suspects had posed a severe threat to public safety and social order, said Tsui.

After obtaining legal advice from the Department of Justice, some arrested suspects would be prosecuted, said Tsui, adding that the police did not rule out more arrests in coming days.

The police had rejected the application of a public procession on Hong Kong Island on Saturday to ensure the safety of residents and public order after several similar events turned extremely violent since early June.

However, protesters on Saturday defied the police ban by occupying downtown roads. During their marches, some radical protesters smashed traffic lights and dismantled roadside railings to set up barricades to confront the police.

Black-clad rioters who wore mask and helmet attempted to storm the headquarters buildings of the Hong Kong Special Administrative Region (HKSAR) government and the Legislative Council, using sling shots to fire petrol bombs and other objects into the buildings before they set fires on a main street near the Hong Kong police headquarters.

They also set fires in different places, vandalized public property, set up barricades, and damaged facilities at MTR stations such as platform screen doors. The fire set up by arsonists at Hennessy Road was very fierce at one point, reaching the height of over bridge and posing serious danger to residents nearby.

(THIS ARTICLE IS COURTESY OF THE SHANGHAI SHINE DAILY NEWS) 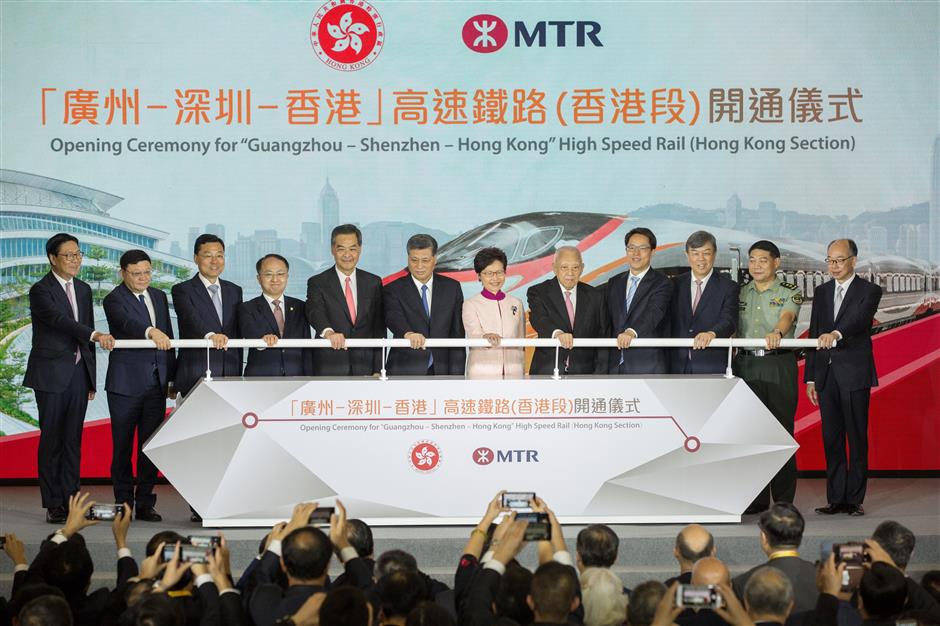 The opening ceremony of the Hong Kong Section of the Guangzhou-Shenzhen-Hong Kong Express Rail Link was held Saturday at Hong Kong West Kowloon Station, one day ahead of the official operation of the first high-speed train from Hong Kong to the mainland.

“Pearl of the Orient” and other songs played by Hong Kong violinist Yao Jue and Hong Kong String Orchestra as well as the video narrating the development of the railway in Guangdong and Hong Kong commenced the opening ceremony.

Lam Cheng Yuet-ngor and Ma Xingrui also unveiled a display embodying the official operation of the West Kowloon Station, the terminal of the cross-boarder high-speed rail trains between Hong Kong and the mainland.