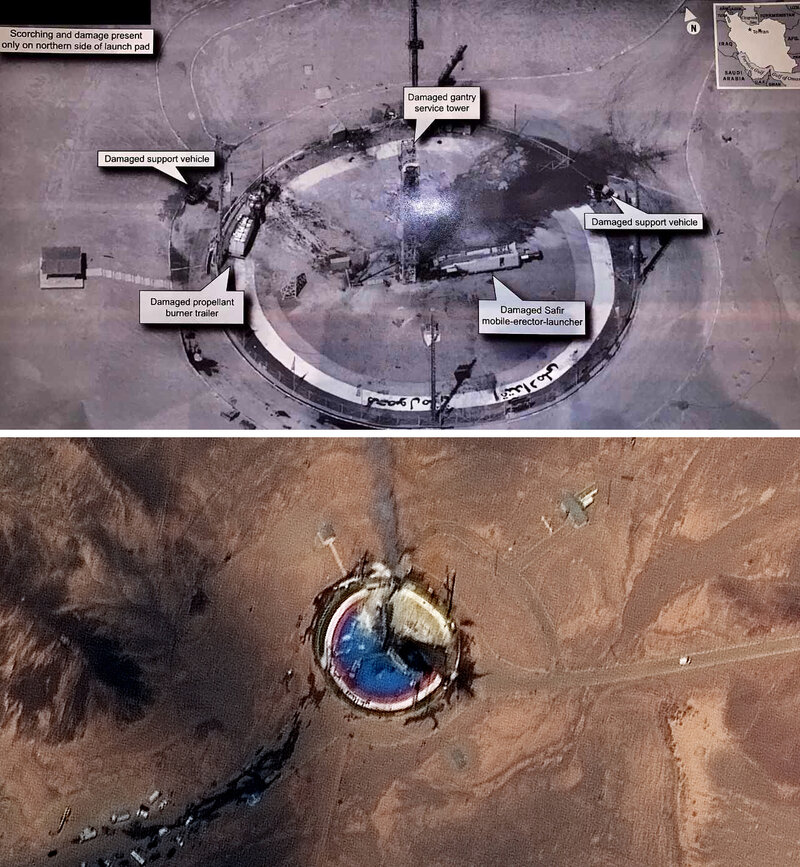 A commercial satellite image from the company Maxar (bottom); the image tweeted by President Trump (top) appears to be of better quality.

President Trump has tweeted what experts say is almost certainly an image from a classified satellite or drone, showing the aftermath of an accident at an Iranian space facility.

“The United States of America was not involved in the catastrophic accident during final launch preparations for the Safir [Space Launch Vehicle] Launch at Semnan Launch Site One in Iran,” the president said in a tweet that accompanied the image on Friday. “I wish Iran best wishes and good luck in determining what happened at Site One.” 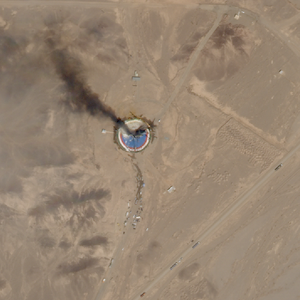 NPR broke the news of the launch failure on Thursday, using images from commercial satellites that flew over Iran’s Imam Khomeini Space Center. Those images showed smoke billowing from the pad. Iran has since acknowledged an accident occurred at the site.

Some of the highest-resolution imagery available commercially comes from the company Maxar, whose WorldView-2 satellite sports 46-centimeter resolution.

But the image shown in the president’s tweet appears to be of far better quality, says Ankit Panda, an adjunct senior fellow at the Federation of American Scientists, who specializes in analyzing satellite imagery. “The resolution is amazingly high,” says Panda. “I would think it’s probably below well below 20 centimeters, which is much higher than anything I’ve ever seen.”

The United States of America was not involved in the catastrophic accident during final launch preparations for the Safir SLV Launch at Semnan Launch Site One in Iran. I wish Iran best wishes and good luck in determining what happened at Site One. 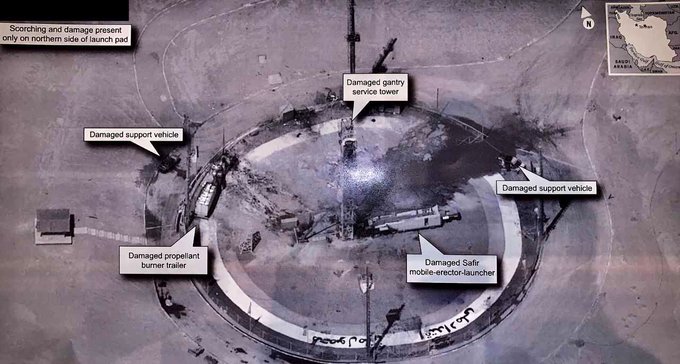 17K people are talking about this

Panda says that the tweet discloses “some pretty amazing capabilities that the public simply wasn’t privy to before this.”

The Office of the Director of National Intelligence referred questions about the image to the White House, which declined to comment.

The image shows the aftermath of the accident, which experts believe took place while the rocket was being fueled. Clearly visible is the truck used to transport and erect the rocket, and the words “The product of national empowerment,” which have been written along the edge of the pad. The picture also shows extensive debris and charring around the pad.

It was not entirely clear where the president’s photo came from. Panda believes it was most likely taken by a classified U.S. satellite. But Melissa Hanham, deputy director of the Open Nuclear Network at the One Earth Foundation, believes that the resolution is so high, it may be beyond the physical limits at which satellites can operate. “The atmosphere is thick enough that after somewhere around 11 to 9 centimeters, things get wonky,” she says.

That could mean it was taken by a drone or spy plane, though such a vehicle would be violating Iranian airspace. Hanham also says that the European company Airbus has been experimenting with drones that fly so high, they are technically outside the atmosphere and thus operating outside national boundaries. But she says she doesn’t know whether the U.S. has such a system.

Glare in the center of the image suggests the image in the tweet was itself a photo of a briefing slide. Panda suggests it could have been displayed on a computer screen in a Sensitive Compartmented Information Facility. It’s also possible it was a photo of a piece of paper.

Either way, Panda notes that a small redaction in the upper left-hand corner suggests the intelligence community had cleared the image for release by the president.

But both he and Hanham question whether releasing it was a good idea. “You really risk giving away the way you know things,” Hanham says. “That allows people to adapt and hide how they carry out illicit activity.”

“These are closely held national secrets,” Panda adds. “We don’t even share a lot of this kind of imagery with our closest allies.” In tweeting it out to the world, Trump is letting Iran know exactly what the U.S. is capable of. He’s also letting others know as well, Panda says. “The Russians and the Chinese, you’re letting them know that these are the kind of things that the United States has the capability of seeing,” he says.

With additional reporting by Greg Myre and Ayda Pourasad

Iran Recruits Afghans to Defend Assad, their Numbers is a ‘Military Secret’ Fleeing grinding poverty and unemployment, thousands of Afghan Shi’ites have been recruited by Iran to defend the head of the Syrian regime, Bashar al-Assad.

“For me it was just about money,” Shams, a former fighter, told Agence France Presse.

Hurman Rights Watch says the Iranians refuse to provide accurate figures, but estimates there are nearly 15,000 Afghans fighting for Fatemiyoun.

Shams, a 25-year-old member of the Hazara ethnic group, went to Syria twice in 2016 to fight in a conflict that has now been raging for more than six years.

“I went there (Iran) because I was jobless and it was a way to get money for my family,” said Shams.

“My idea was to find a job in Iran. I had no plan to go to fight in Syria but after a month of being jobless I decided to go.

“They were encouraging us saying ‘you will be a freedom fighter and if you return to Iran alive you can stay with a 10-year residence permit’.”

Afghan Shi’ites are given 1.5 million toman (about $450) to register at a recruitment center for the Fatemiyoun, Shams said. Once they have signed up they receive three million toman a month, a fortune for many poor Afghans.

Shams’ first mission was in June 2016 in the Syrian capital of Damascus, where he was assigned to protect a barracks for two months.

He went back to the country in September and was deployed to Aleppo, where he was given his first AK-47 after receiving rudimentary weapons training from Iran’s Revolutionary Guards.

On the front line of the battle between ISIS militants and Al-Nusra Front group, Shams said he found himself caught up in an intense and deadly battle.

“In Aleppo we faced an ambush — out of 100 fighters we lost almost all of them. There were 15 of us left alive,” Shams said.

“The bodies were sent back to Iran and the families in Afghanistan held funeral ceremonies in mosques without a coffin or grave.”

Ali Alfoneh, a senior fellow at the Washington-based think tank Atlantic Council, estimates more than 760 Afghans have been killed in Syria since September 2013.

The number of Afghans fighting for the Fatemiyoun is a “military secret,” said Ramazan Bashardost, a Hazara member of parliament in Kabul.

“They are used by the Iranian government, which treats them like slaves,” he said.

“The sorrow, pain and hunger of the people is not a major concern of the Afghan government,” he added.