At least nine people were killed and 16 people injured after a shooting early Sunday in Dayton, Ohio, police said.

The suspected shooter, who is believed to have acted alone, is also dead.

Carper said the 16 people who were injured have been hospitalized. Their conditions are unknown.

A spokesperson for the local Miami Valley Hospital, Terrea Little, confirmed to NBC News that the hospital was treating 16 victims.

Reports from local media and eyewitness accounts to NBC News suggest the shooting took place at or near Ned Peppers bar, in the heart of the district.

Carper said multiple officers happened to be in the immediate vicinity when the shooting happened, which led to the incident being resolved in a very short period of time.

“For that, we are very fortunate,” Carper said. “This is a very tragic incident. We are doing everything we can to investigate it and try to identify the motivation behind this.”

No police officers were injured.

The entire incident unfolded outside the bar and it appears a long gun was used by the shooter, Carper said. 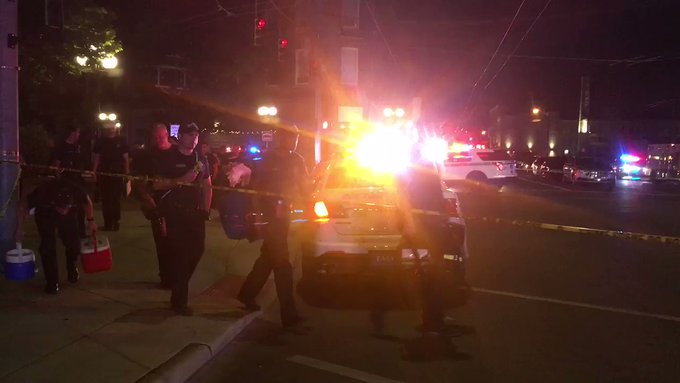 Video of EMS re-positioning from the shooting scene and walking to a nearby club where witnesses are being interviewed by police in Dayton shooting.

Police are now interviewing witnesses to see if anyone else may have been involved.

“At this time it looks like it might just be one person,” Carper said, adding that multiple officers took down the shooter.

The FBI is also at the scene to assist in the investigation.

The shooting in Dayton comes just hours after 20 people were killed and 26 more injured in El Paso, Texas, when a gunman opened fire in a Walmart and around a nearby shopping mall on Saturday.

Taylor Mayberry, who said she was inside Ned Peppers when the shooting took place early Sunday, told NBC News she hid in the bar’s bathroom as “tons of gunshots” were going off.

“I just heard a few gunshots and then saw everyone jumping to the ground,” she said. “I’ve never experienced anything like that, so I dove to the ground and started running to the bathroom. I saw people trying to move toward the exit.”

She said she was one of the last people to be let into the bathroom, where ten other people were taking shelter.

“We were holding the door shut and waiting until the gunshots stopped,” Mayberry said. “People were banging on the doors throughout. We weren’t sure if they were…you know…we weren’t sure if it was people getting in to shoot us or to get safe.”

“All of our staff is safe and our hearts go out to everyone involved as we gather information,” the bar said in a post on Instagram.

This is a breaking news story. Please check back for updates.

Yuliya Talmazan is a London-based journalist.

Caroline Radnofsky is a London-based reporter for NBC News.