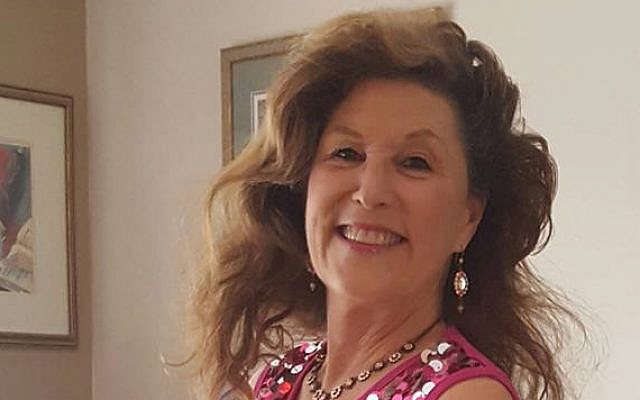 Lori Gilbert-Kaye, who was killed in a shooting at a San Diego County synagogue on April 27, 2019 (Facebook)

The US woman killed in a shooting at a San Diego County synagogue was named late Saturday as Lori Gilbert-Kaye, a 60-year-old mother.

Gilbert-Kaye was attending Passover services at the synagogue when a gunman opened fire with an assault rifle on worshipers at the Poway, California, synagogue, local authorities said.

Three other people were injured, including Rabbi Yisroel Goldstein, 57, who was leading services at the time and was shot in both hands.

The other two were Noya Dahan, 8, a girl originally from Sderot in Israel who was hit by shrapnel in the face and leg, and her uncle Almog Peretz, 31, who was shot in the leg as he ushered children in a playroom to safety, according to media reports. Israel’s Foreign Ministry confirmed the two were injured, adding that the consul in Los Angeles, Avner Saban, had spoken with the girl’s mother and offered help.

Authorities said all three were in stable condition.

Gilbert-Kaye was described in media reports and by fellow congregants as a mother of one. 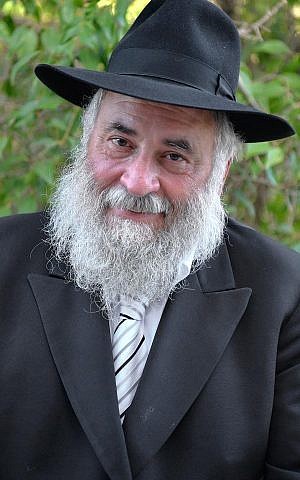 Her friend Audrey Jacobs, a community activist, said Gilbert-Kaye had jumped in front of Rabbi Mendel Goldstein — Rabbi Yisroel Goldstein’s son — “to take the bullet and save his life.”

“Lori you were a jewel of our community a true Eshet Chayil, a Woman of Valor,” Jacobs wrote on Facebook. “You were always running to do a mitzvah (good deed) and gave tzedaka (charity) to everyone. Your final good deed was taking the bullets for Rabbi Mendel Goldstein to save his life.

“Lori leaves behind a devastated husband and 22-year-old daughter,” she added.

Witnesses said the injured rabbi continued his speech calling for unity and peace despite suffering gunshot wounds to both index fingers.

“The rabbi said, ‘We are united,’” said congregation member Minoo Anvari, who said her husband witnessed the shooting.

“He prayed for peace,” she said, according to the Chabad website. “Even in spite of being injured he refused to go to the hospital until he spoke. And he finished his speech and he then left the synagogue.”

“We are strong; you can’t break us,” Anvari said.

He underwent surgery and would have to remain hospitalized for several days, according to Dr. Michael Katz, trauma chief at Palomar Medical Center, according to the San Diego Jewish World.

According to Jacobs’ Facebook post, the family of the injured Israeli girl and her uncle “moved to San Diego from the Israeli city of Sderot to get away from the terrorism and the constant attacks on their community.”

Sderot has been targeted by thousands of rockets fired by terror groups in the Gaza Strip over the last 15 years. 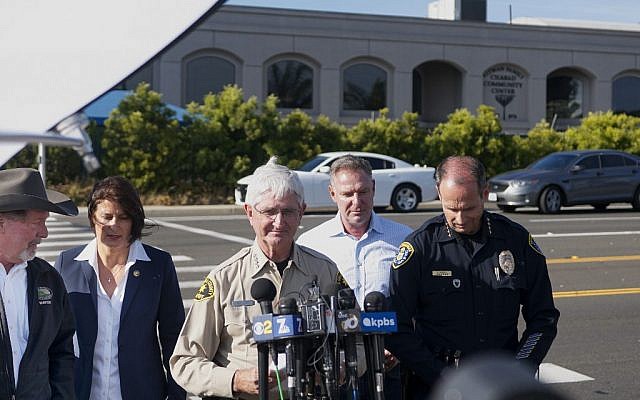 San Diego County Sheriff Bill Gore addresses the media in front of the Chabad of Poway Synagogue after a shooting on April 27, 2019 in Poway, California. (Photo by SANDY HUFFAKER / AFP)

Rabbi Yonah Fradkin, executive director of Chabad of San Diego County, said in a statement that “in the face of senseless hate we commit to live proudly as Jews in this glorious country. We strongly believe that love is exponentially more powerful than hate. We are deeply shaken by the loss of a true woman of valor, Lori Kaye, who lost her life solely for living as a Jew.”

“Lori Gilbert-Kaye is a Jewish heroine, and will be remembered as a heroine in Jewish history,” said Israel’s minister of diaspora affairs, Naftali Bennett. “She sacrificed her own life, throwing herself in the path of the murderer’s bullets to save the life of the rabbi. But it is clear that such heroism and good deeds are not only characteristic of dear Lori in death, but that this was the way she lived her life — constantly doing charity and good deeds for those in need.”

Police have named the suspect in the shooting as John Earnest, 19, from San Diego, and have said they are reviewing an anti-Semitic white nationalist manifesto allegedly posted by a user with the same name.

“We’re looking into digital evidence and checking the authenticity of an online manifesto,” the office of San Diego County Sheriff Bill Gore said.

Earnest surrendered to police after leaving the synagogue and calling to report the shooting, according to authorities.

Gore declined to say what the motive for the crime was, but Poway Mayor Steve Vaus and others have said it appeared to be a hate crime.