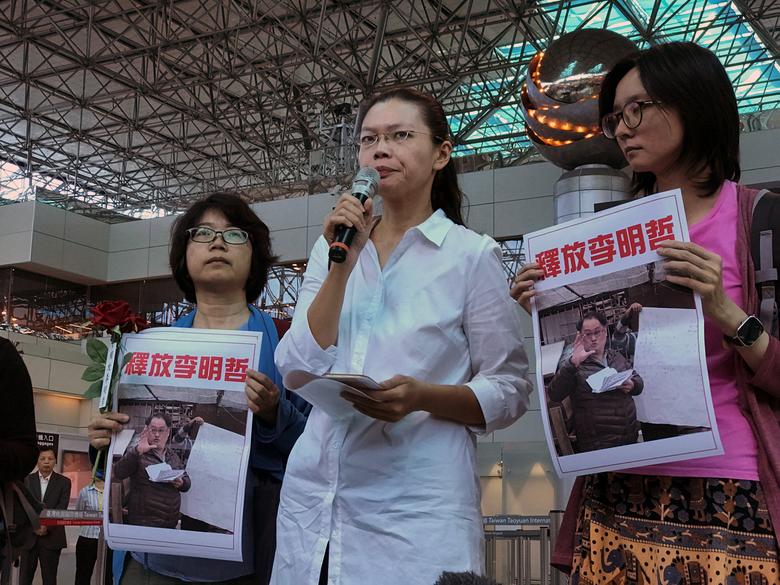 Li Ching-yu (C), a wife of Taiwanese human rights activist Li Ming-che, who is detained in China, speaks to media after she was rejected to board a plane to Beijing at Taoyuan International Airport, Taiwan April 10, 2017. REUTERS/Fabian Hamacher

The wife of a Taiwan activist accused Beijing of “political conspiracy” on Monday after she was barred from traveling to the mainland to support her husband who was detained there last month on suspicion of endangering national security.

The activist, Li Ming-che, is a community college worker known for supporting human rights in China. He went missing while traveling to China on March 19.

More than a week later, China’s Taiwan Affairs Office said Li had been detained on suspicion on endangering national security but gave no information on his whereabouts.

Li’s wife, Li Ching-yu, had been scheduled to fly to Beijing but told reporters at Taiwan’s international airport her permit to enter the mainland had been canceled.

“I am a weak woman who wants to visit. Is it really necessary for the Chinese government to use such great force to prevent this?” Li said.

“This action confirms to the outside world that there is political conspiracy behind the Chinese government’s arrest of Li Ming-che.”

Li’s detention has put another strain on ties between Taipei and Beijing, which have cooled since Taiwan President Tsai Ing-wen took power last year because she refuses to concede that the island is part of China.

Beijing has never renounced the use of force to bring Taiwan into its fold, while proudly democratic Taiwan has shown no interest in being run by Communist Party rulers in Beijing.

The DPP said on March 30 Li’s detention would “increase doubts for Taiwanese people traveling to China and affect normal exchanges between people of both sides”.

Taiwan activists have linked Li’s detention to a new law targeting foreign non-governmental organizations in China, which grants powers to police to question organization workers, monitor their finances and regulate their work.

Taiwan citizens use a special entry permit issued by China to travel there because China does not recognize Taiwan passports.

Over the weekend, Chinese state media reported that a letter written by Li Ming-che had been delivered to his family last Friday on humanitarian grounds.

However, according to Li Ching-yu, the letter was a copy that she could not verify was from her husband.

(Reporting by Damon Lin and Fabian Hamacher; Additional reporting by J.R. Wu in TAIPEI and Christian Shepherd in BEIJING; Editing by Robert Birsel)