Have you ever wanted to get away from it all? Whether it’s a crazy workload or just the desire for some real peace and quiet, it’s only natural that occasionally you’ll want to escape. And sometimes you want to go somewhere remote where you aren’t likely to run into anyone you know. If you’re dying for an escape, these six places are so remote you’ll wonder how you even get there. 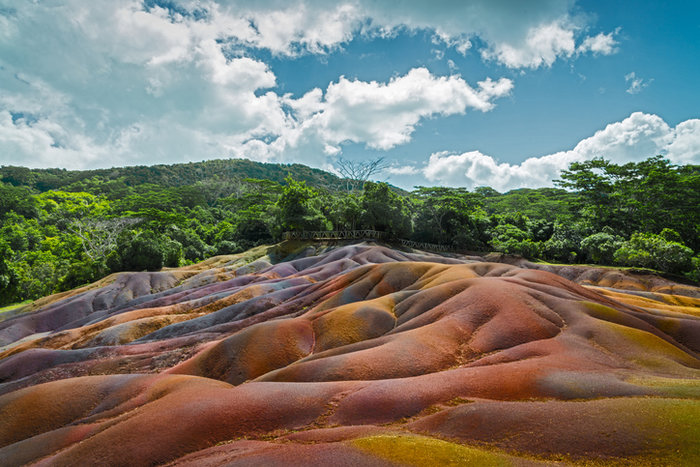 Test your knowledge!
Where are these “seven colored” sand dunes?

Giza and Cairo might get all the attention when you mention Egypt, but the country is home to one of the most remote places in the world—Siwa Oasis. The Siwa Oasis is located within the Great Sand Sea and is full of lush olive and palm trees, along with mud-baked structures. But before you get any ideas that this place is abandoned, it’s not. Siwa Oasis is a thriving small town that is one of the most eastern areas to encapsulate the North African Amazigh Berber culture. To reach Siwa Oasis, the best option is to catch an eight- to 10-hour bus ride from surrounding cities like Cairo or Alexandria.

Some regions just sound remote by default, and Tibet is the perfect example. In addition to being remote, the Changtang Plateau is home to the world’s second largest nature preserve. The preserve protects snow leopards, brown bears and black necked cranes along with other wildlife species. The locale is known as “The Roof of the World” because it is two and a half miles above sea level. The inhabitants of this region are nomadic and known as Changpa. According to a 1989 census, roughly half a million Changpa live in this area. However, if you’re thinking of braving the elements to get here, come prepared. Changtang is extremely remote and you’ll have to bring everything you need.

You don’t have to go abroad if you’re looking for a remote escape. Just head to the Grand Canyon. This might seem counterintuitive because of the park’s popularity, but the Havasupai Reservation is located within the canyon and includes the Supai Village. Supai Village can be reached if you’re up to the challenge of an 8-mile hike below the Grand Canyon rim. Note that while the village and the reservation are located within the Grand Canyon, they are not controlled by the National Park system, but rather by their tribal government.

To plan a trip to Supai Village, book a reservation through their tribal website. You can opt for a campground or lodge reservation. The campground allows you to camp anywhere along designated camping areas while the lodge is for those who don’t like “roughing it.” You can’t drive to Supai Village. Even the mail is delivered via pack mule. To access this remote town, either hike, take a helicopter to Hualapai Hilltop, or rent a pack horse or mule.

Did you know that the world’s northernmost city is in Norway? If you’re up for the challenge, the isolated town of Longyearbyen is the perfect vacation spot. The town was founded by an American, John Longyear, in 1906 as a mining encampment. Between October 25 and March 8, the town experiences perpetual darkness because of its northern location.

You might be surprised to find that this Norwegian town is quite diverse. Longyearbyen is a popular haven for nature enthusiasts and scientists from around the world. Unlike other places in Norway—or even on this list—Longyearbyen “residents” are transient. People stay to complete work projects for a few years or even just months before returning to their permanent homes. To reach Longyearbyen, you can catch a flight from other locations directly to their local airport.

Longyearbyen isn’t the only remote mining town. La Rinconada is one of the highest elevation cities in the world, sitting 16,728 feet above sea level. This city of 50,000 people saw a massive population boom in the last decade because of gold prospecting. But its population growth exploded beyond their infrastructure means, so inhabitants often don’t have access to running water, paved roads or electricity. Of all of the locales on this list, La Rinconada is one of the hardest to reach. Because it’s high in the Andes, visitors risk altitude sickness to reach La Rinconada. And since there’s no consistent transit access, tourists must reach the town on their own.

Do you like cold weather? Have you ever wanted to visit a place so cold it makes your eyelashes freeze? If you’re thinking “sign me up!” then Oymyakon is the perfect place to plant your flag. We’re really not kidding when we say it gets cold: Temperatures can drop to as low as 88 degrees below Fahrenheit. The cold is such a concern that residents often leave their cars running to prevent the batteries from dying.

Oymyakon is a small settlement of 500 people located in the Yakutia region of Russia. This freezing town does get at least three hours of daylight in the winter. Still, if you’re planning on visiting this inhospitable land, dress warmly as frostbite is a serious concern here. Traveling to Oymyakon is a test of your patience. After a seven-hour flight from Moscow, you must somehow find a connecting ride on your own to reach the remote town.