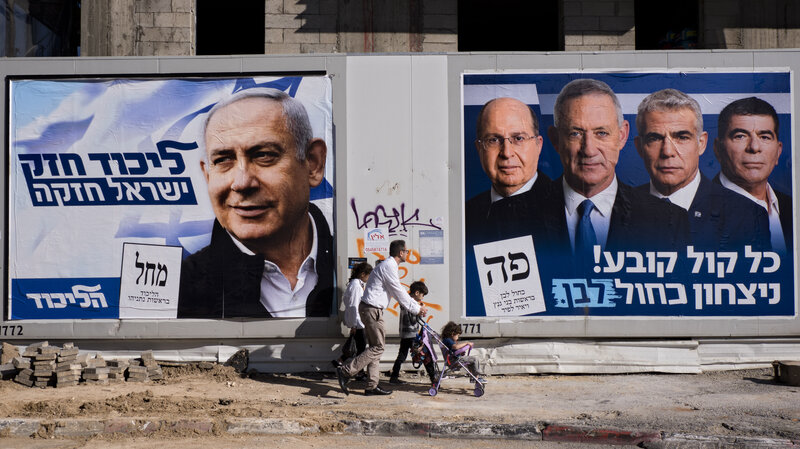 People walk by election campaign billboards showing Israeli Prime Minister and head of the Likud party Benjamin Netanyahu (left) alongside the Blue and White party leaders, including Benny Gantz. Ahead of Tuesday’s election, Netanyahu has pledged to annex Israeli settlements in the occupied West Bank.

Israeli Prime Minister Benjamin Netanyahu has said that he will annex Israeli settlements in the occupied West Bank if he is re-elected.

Netanyahu staked out the position on television on Saturday, ahead of Tuesday’s election where he faces a challenge from his former army chief of staff Benny Gantz

The first-time move from the prime minister appears to be aimed at galvanizing support among his nationalist base and right-wing political allies. The annexation of parts of the West Bank would likely be considered the final blow to the possibility of a two-state solution to the Israeli-Palestinian conflict.

“I will impose sovereignty, but I will not distinguish between settlement blocs and isolated settlements,” he continued, The Associated Press reports. “From my perspective, any point of settlement is Israeli, and we have responsibility, as the Israeli government. I will not uproot anyone, and I will not transfer sovereignty to the Palestinians.” 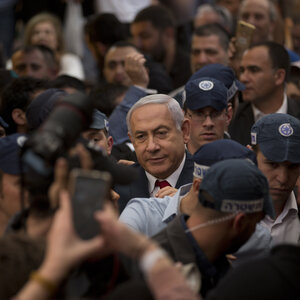 Here’s What To Know About Israel’s Upcoming Elections

On Sunday, Palestinian Foreign Minister Riad Malki responded to that pledge and accused the U.S. of encouraging Netanyahu.

“If Netanyahu wants to declare Israeli sovereignty over the West Bank, then you know he has to face a real problem, the presence of 4.5 million Palestinians, what to do with them,” Malki told the AP while attending the World Economic forum in Jordan, apparently citing the combined total of Palestinians living in the occupied West Bank, East Jerusalem and the Gaza Strip.

He said Israel cannot expel the Palestinians, adding, “The international community has to deal with us.”

Netanyahu has actively supported the growth of Israeli settlements in the West Bank, which Israel has occupied since the Six-Day War in 1967. But Israel has so far stopped short of formally annexing the West Bank, leaving the door open for further negotiations with Palestinians.

Some 400,000 Israeli settlers and 2.8 million Palestinians now live in in the West Bank.

The Israeli settlements – which include large subdivisions and cities full of middle-class villas – have long complicated efforts for a two-state solution: Palestinians have said the settlements would make it impossible to create a viable state in the West Bank, as NPR’s Greg Myre has reported.

What To Know About Israel’s Elections

Another 200,000 Israelis live in East Jerusalem, part of the West Bank that Israel annexed shortly after the 1967 war.

“Such a statement by Netanyahu is not surprising,” Erekat wrote on Twitter. “Israel will continue to brazenly violate international law for as long as the international community will continue to reward Israel with impunity, particularly with the Trump Administration’s support and endorsement of Israel’s violation of the national and human rights of the people of Palestine.”

Netanyahu’s political campaign has emphasized his close ties with President Trump, Estrin reports. In his prime time interview on Saturday, Netanyahu portrayed those moves of support from the Trump administration as his own achievements, the AP reports. 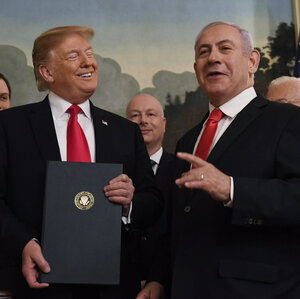 Last month, Trump recognized Israeli sovereignty over the Golan Heights, which Israel seized from Syria in 1967. In his first year in office, Trump had also recognized Jerusalem — the disputed city claimed as capital by both Israeli and Palestinian people — as Israel’s capital, breaking with decades of U.S. foreign policy.

Polls indicate a close race, though Netanyahu’s Likud Party and its traditional allies, smaller right-wing parties, are predicted to win a slight majority of the votes. That gives Netanyahu the edge on forming a ruling coalition over Gantz’s Blue and White political alliance – unless some right-wing parties choose to side with Gantz, Estrin reports.

Gantz has accused Netanyahu of inciting against Israel’s Palestinian Arab citizens and embracing extremists by allying with the far-right Jewish Power Party.