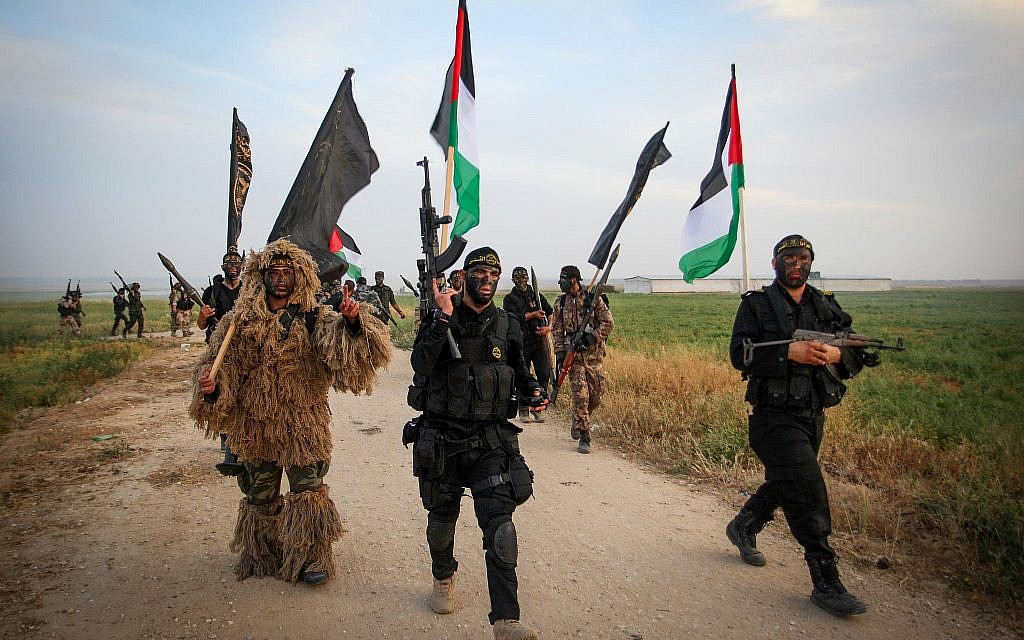 Palestinian Islamic Jihad terrorists march during a military drill near the border with Israel, east of the town of Khan Younis in the southern Gaza Strip, on March 27, 2018. (Abed Rahim Khatib/ Flash90)

Tuesday morning’s barrages of mortar shells and rockets into southern Israel were quickly rumored in Gaza to be the work of the Islamic Jihad terror group. And hours after more than two dozen mortar shells hit Israel, the IDF carried out retaliatory strikes that were mainly directed at Islamic Jihad’s military wing.

Islamic Jihad’s role indicates we are witnessing an attempt by Iran to spark a war on the southern border. And if the deterioration of the situation is not halted in the very near future, the attempt may prove successful. Already we have seen an attack on Israeli targets unprecedented since 2014’s Protective Edge conflict, with a consequent Israeli response against targets in Gaza.

The Islamic Jihad barrages were ostensibly aimed at avenging Israel’s reported killing of three of its operatives, who were attempting an attack, earlier this week in the Rafah area. That was the immediate pretext. But the nature and scale of the Islamic Jihad response — heavy fire at civilian targets in Israel — indicates that revenge was not the only motivation. It is possible that this is at root an Iranian move, seeking to have Israel pay a price in the south for targeting Iran in the north — across the border in Syria.

After all, it is hard to believe that Islamic Jihad, a smaller ally-rival of Hamas which is financed and trained primarily by the Iranians, would have initiated this kind of action, with its dramatic consequences for Gaza, without Tehran’s approval. 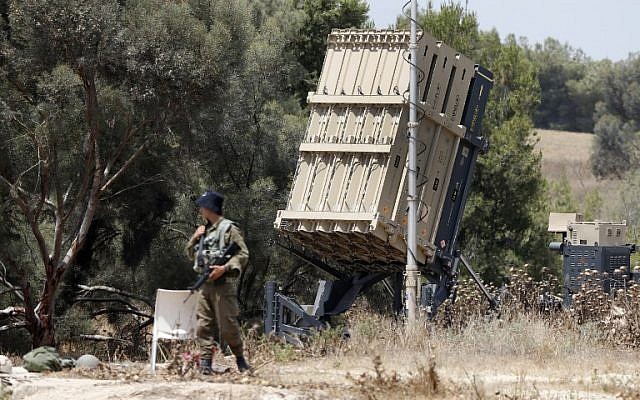 Israeli soldiers stand guard next to an Israeli Iron Dome defense system, designed to intercept and destroy incoming short-range rockets and artillery shells, deployed along the border with the Gaza strip on May 29, 2018. (AFP PHOTO / JACK GUEZ)

Israel has been making clear of late that it operates freely in Syria against Iran’s Islamic Revolutionary Guard Corps there; it may well be that there are those in Tehran who want to counter that via the Gaza Strip, or at least to stir up Israel’s southern border and therefore distract Israel’s attention from the north.

Where does Hamas, the terror group that rules Gaza, fit into this? Hamas was quick to welcome the barrages fired at Israel. And the IDF has also targeted several Hamas facilities. Yet the fact remains that Hamas’s activities in recent months indicate that it is not particularly interested in an escalation, and Israel recognizes this.

Hamas has put the brakes on a potential deterioration into all-out conflict more than once of late, even after its forces were hit. The most obvious recent example of this was on May 14, the day the US inaugurated its embassy in Jerusalem, Nakba Day, when more than 60 Gazans were killed in violent clashes with Israel at the Gaza border. Hamas later acknowledged that almost all of the fatalities were its members. Yet it ordered the dispersal of the protests at the border that evening, to avoid a potential descent into war. 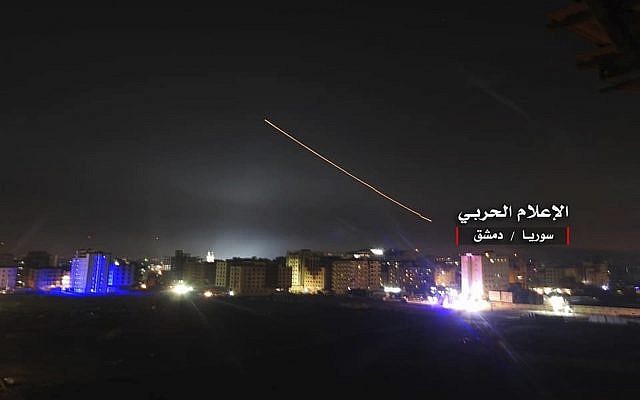 Illustrative. A photo provided by the pro-regime Syrian Central Military Media, shows anti-aircraft fire rise into the sky as Israeli missiles hit air defense positions and other military bases around Damascus, Syria, on May 10, 2018, after the Israeli military says Iranian forces launched a rocket barrage against Israeli bases on the Golan Heights, in the most serious military confrontation between the two bitter enemies to date. (Syrian Central Military Media, via AP)

Hamas leaders Yahya Sinwar and Ismael Haniyeh have been engaged in various secretive contacts of late — intermittently involving Egypt and, separately Qatar — intended to yield understandings for a long-term Hamas-Israel ceasefire. Evidently, however, there are other players — Islamic Jihad and Iran — who want to heat things up.

Islamic Jihad’s attacks on Israel are also embarrassing Hamas in the eyes of the Gaza public. Hamas knows that if its forces do not prevent a continuation of Islamic Jihad fire — whether through the use of force, or threats, or both — there is a considerable likelihood that Gaza will once again find itself at war with Israel. But if Hamas does intervene against Islamic Jihad, its image as the “resistance” against Israel will be undermined. It would risk becoming perceived as another kind of “Palestinian Authority,” collaborating with the Zionist enemy in return for quiet and/or economic benefit.