(CNN) ISIS has “executed” 232 people near the Iraqi city of Mosul and taken tens of thousands of people to use as human shields against advancing Iraqi forces, the United Nations says.

The terror group carried out the mass killings Wednesday, punishing people who had defied its orders, a spokeswoman for the UN human rights arm told CNN.
“ISIS executed 42 civilians in Hammam al-Alil, south of Mosul. Also on Wednesday ISIS executed 190 former Iraqi security forces for refusing to join them, in the Al Ghazlani base near Mosul,” said Ravina Shamdasani of the Office of the UN High Commissioner for Human Rights. 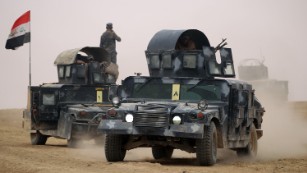 Iraqi forces gather this week in the al Shura area, south of Mosul.
Another 24 former Iraqi security forces officers were reportedly killed Tuesday, the office said.
Since October 17, ISIS has taken tens of thousands of men, women and children from the outskirts of Mosul into the city. Shamdasani said the United Nations feared the group intended “to use them as human shields against the Iraqi forces advance on Mosul.”
There have been other reported civilian deaths over the past week as ISIS tries to herd people into its last major stronghold in Iraq and the nation’s second city against the Iraqi-led operation.
Inside Mosul: Tunnels, resistance and terror
Iraqi forces have now launched an operation to cut ISIS supply lines west of Mosul, according to a statement released Saturday by Hashd al Shabi, also known as the Popular Mobilization Units (PMUs).
The PMUs are fighting alongside the Iraqi military and the Kurdish Peshmerga as they attempt to re-take Mosul from ISIS.

Reports of the latest ISIS atrocities came as Iraqi security forces reported further progress Friday in their advance from the south of Mosul. 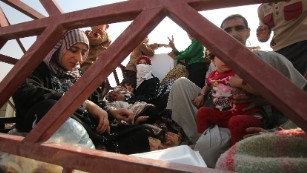 An Iraqi family is south of Mosul after fleeing the Hammam al-Alil area.
Abdulrahman al Wagga, a member of the Nineveh provincial council, told CNN the security forces had taken the town of al Shura, about 30 kilometers (19 miles) south of Mosul, and had evacuated 5,000 to 6,000 civilians.
The area is being cleared of homemade bombs and booby traps, he said.
Iraqi security forces and federal police have also now “90% surrounded Hammam al-Alil,” the largest town south of Mosul, Wagga said.

ISIS has used human shields before

Wagga said the Iraqi forces might storm Hammam al-Alil soon but it would depend on the situation on the ground since civilians were still present. 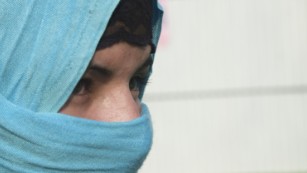 Fleeing ISIS’ assault on girls and women
Reports indicate that ISIS has abducted at least 5,370 families from around al Shura and 150 more from around Hammam al-Alil, Shamdasani told a briefing in Geneva, Switzerland.
Another 160 families have reportedly been seized from around Qayyara, she said, and 2,210 families from the Nimrud area of Hamdaniya district.
“Forced out by gunpoint, or killed if they resist, these people are reportedly being moved to strategic locations where ISIL fighters are located,” Shamdasani said, using an alternative acronym for ISIS.
Information received by the United Nations suggests some 60,000 people are currently living in Hammam al-Alil, an ISIS stronghold with a previous population of 23,000, she said. 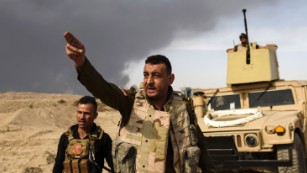 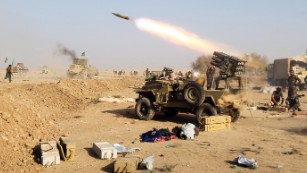 The use of human shields is banned under international humanitarian law, and constitutes a violation of the right not to be arbitrarily deprived of life, the UN refugee agency said.
ISIS has used the same tactic in previous battles in Iraq, notably in Falluja in June.

The UN High Commissioner for Human Rights, Zeid Ra’ad Al Hussein, said the terror group’s “depraved, cowardly strategy is to attempt to use the presence of civilians to render certain points, areas or military forces immune from military operations, effectively using tens of thousands of women, men and children as human shields.”
He also warned last week that ISIS fighters appeared to be using civilians in and around Mosul as human shields. 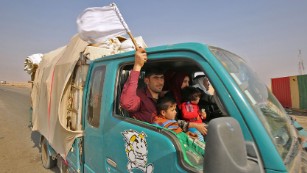 An Iraqi man waves a white flag as his family flees the fighting Thursday.
The commissioner urged those fighting ISIS not to carry out revenge attacks and called on the Iraqi government to ensure respect for the rule of law.
As the fighting around Mosul intensifies, growing numbers of civilians have sought to flee despite the risks involved.
The International Organization for Migration reported the Mosul operation had displaced 16,566 people as of Friday. Camps have been set up to accommodate an expected flood of desperate families.
Pirate radio risks death to fight ISIS on airwaves

Civilians continued Friday to stream out of villages to the east of Mosul that ISIS had held until recent days. 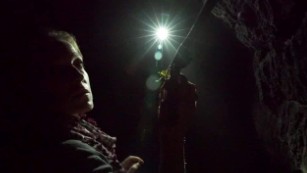 Inside the tunnels of ISIS02:19
Several people gave insight into life under ISIS rule, telling the Kurdish network Rudaw that militants had fired at them as they left a settlement near Darwish to the northeast of Mosul.
One woman said her brother had been killed after being accused of spying for the Peshmerga, or Kurdish fighters. She said women had been forced to wear gloves and be completely covered.
A young man told the network his brother had been killed because he had a cell phone and was allegedly a spy.
Iraqi forces are holding positions about 6 kilometers (3.7 miles) from the eastern side of Mosul.
Gen. Aly Al Saady told the al Iraqiya network his force would wait for troops on other fronts to close in on Mosul before launching an attack on the city. He said they had prepared safe corridors for civilians to get out of Mosul before starting the operation.

(THIS ARTICLE IS COURTESY OF BBC NEWS AND REUTERS NEWS AGENCY)

Mosul battle: IS ‘loses hundreds of fighters’ – US generals

Hundreds of Islamic State militants are thought to have been killed since Iraqi forces launched an offensive to retake Mosul last week, the US military says.

Up to 5,000 IS fighters were believed to be in Mosul ahead of the assault.

Despite the territorial gains, commanders have warned that securing Mosul could take weeks, if not months.

More than 100 US military personnel are embedded with them, advising commanders and helping direct coalition air strikes. Other US troops are providing fire support from nearby bases.

Lt Gen Stephen Townsend, the commander of US forces in Iraq, said on Wednesday that the coalition forces had delivered more than 2,100 aerial bombs, artillery and mortar shells, rockets and missiles since 17 October.

“This relentless campaign of strikes has removed hundreds of fighters, weapons, and key leaders from the battlefield in front of the Iraqi advance,” he added.

On Thursday, the head of the US military’s Central Command, Gen Joseph Votel, told the AFP news agency: “Just in the operations over the last week and a half associated with Mosul, we estimate they’ve probably killed about 800-900 Islamic State fighters.”

The Iraqi government informed US commanders on Wednesday that 57 Iraqi soldiers had been killed and about 250 wounded. Kurdish Peshmerga fighters are thought to have suffered about 20 to 30 fatalities.

Despite the removal of hundreds militants from the battlefield, Gen Townsend warned that IS defenses were likely to grow stronger the closer they got to Mosul.

The group had “used an extraordinary amount of indirect fire – mortars, artillery and rockets – and an exceptional number of VBIEDs (Vehicle-Borne Improvised Explosive Devices),” he told reporters during a visit to the Qayyarah airbase.

Fierce resistance by jihadists has held up soldiers in the Shura area, 40-km (25 miles) south of Mosul, prompting elite Counter-Terrorism Service (CTS) forces to pause their advance near the village of Bazwaya, only 6 km east of the city.

CTS commander Brig Gen Haider Fadhil told the Associated Press his forces would wait for other units to reach Mosul’s outskirts before entering the city.

But he stressed: “The operation has not been stopped and is proceeding as planned.”

Meanwhile, the World Health Organization (WHO) said it had trained 90 Iraqi medics in “mass casualty management” as part of its preparations for the Mosul operation, with a special focus on responding to chemical attacks, AP reported.

IS has previously used chemical weapons in attacks on Iraqi and coalition forces, and there are fears that it might do so again inside Mosul, where more than a million civilians live.

Some 11,700 residents have fled since the offensive began and, according to the UN’s worst-case scenario, as many as 700,000 others could follow suit.

“There’s been quite a dramatic upturn in the last few days,” said Karl Schembri of the Norwegian Refugee Council, who warned that there were currently only spaces in camps for 60,000 people.

The WHO is working on the assumption that 200,000 of them will require emergency health services, including more than 90,000 children needing vaccinations and 8,000 pregnant women.