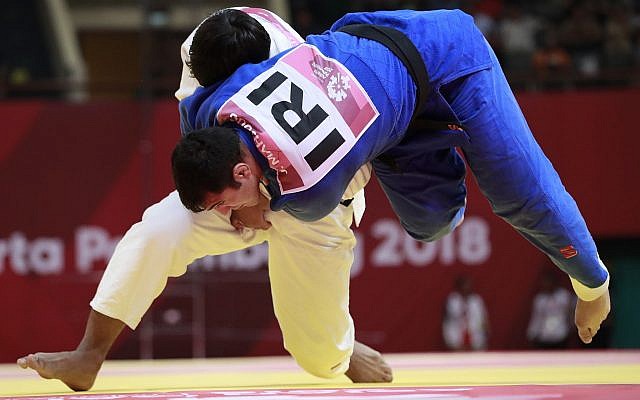 In a historic move, Iranian judo officials have agreed to stop boycotting Israeli athletes on the mat, ending a practice that had drawn criticism against Tehran in the sporting world.

In a statement, the IJF said the letter came after several rounds of talks regarding the “disturbing phenomenon, which involves the sudden ‘injury’ or failure of weigh-in of Iranian athletes,” which it said was related to Iran trying to avoid meeting athletes from certain countries.

Neither Iran nor the IJF specifically mentioned Israel, but Iranian athletes have on several occasions forfeited matches to avoid facing Israelis, who have become increasingly relevant in the sport on the world stage.

Iran’s sports policy is an outgrowth of the country’s official refusal to recognize Israel. Its leaders routinely encourage the demise of the Jewish state and the countries are considered arch foes.

In February, Iranian judoka Saeid Mollaei threw a match at the Paris Grand Slam to avoid facing Israeli Sagi Muki in the next round by feigning an injury, ending his chance at a gold medal. He then recovered to win his bronze medal match, but feigned another injury to avoid standing on the podium with Muki.

According to Israel’s Army Radio, the IJF had threatened to ban Iran from international competitions, including the Olympics, if it did not agree to fight Israelis.

On Saturday, Muki won gold at the Baku Grand Slam, likely securing his place at the 2020 Olympics in Tokyo. 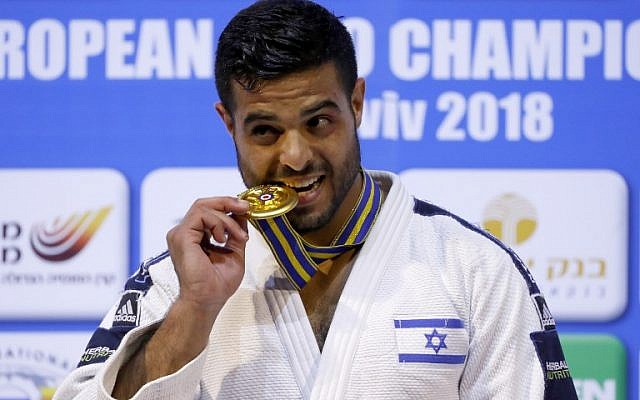 Israel’s Sagi Muki poses on the podium with his gold medal following the men’s under 81 kg weight category competition during the European Judo Championship in the Israeli coastal city of Tel Aviv on April 27, 2018. (AFP PHOTO / JACK GUEZ)

The IJF has in recent years stepped up pressure on Muslim boycotts of Israeli athletes, including refusals to host them or shake hands.

In 2018, the body stripped international competitions from the UAE and Tunisia over their refusal to allow Israelis to compete as Israelis.

The UAE later relented, resulting in the anthem Hatikvah being played in the country for the first time last year after Muki won the gold in the under-81 kg category. 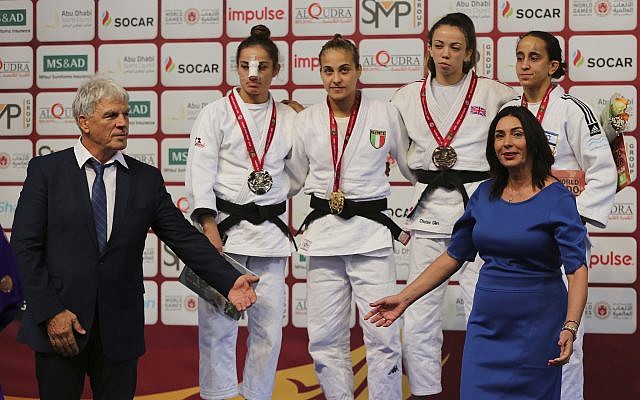 Iran has had a long-time policy of avoiding Israelis in athletic competitions, frequently at the expense of its own competitors. An Iranian swimmer refused to enter the same pool as an Israeli at the Beijing Olympics and in the 2004 Athens Games, an Iranian judoka refused to face an Israeli, resulting in his disqualification.

In February, after Mollaei threw the match in Paris, Iranian athletics chief  Davoud Azarnoush said he hoped “Israel will be wiped out and annihilated before the next Olympic games, and all of us will breathe a sigh of relief,” according to Radio Farda. 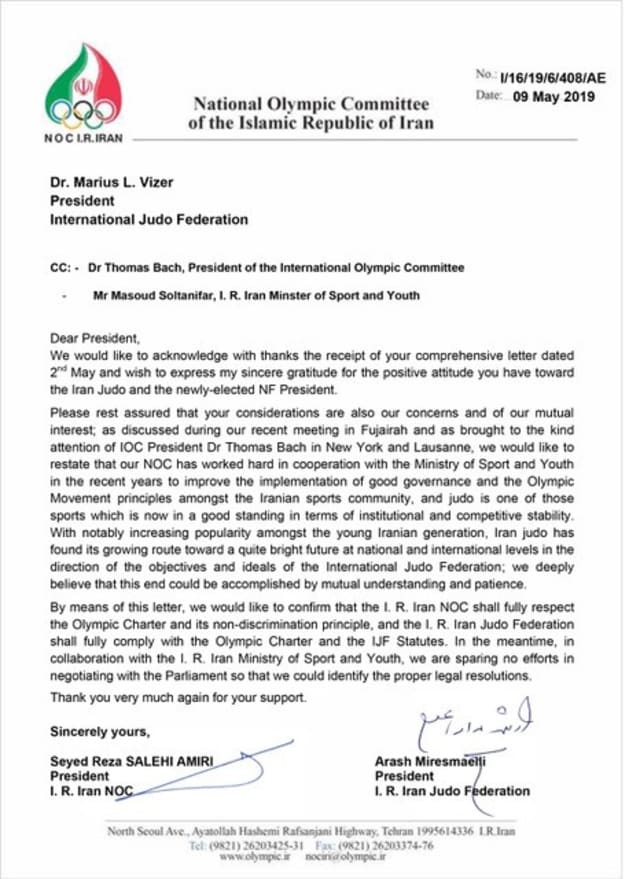 A letter from Iranian judo officials to the IJF, published on May 11, 2019. Click to expand. (IJF)

In the letter to the IJF, the Iranian sports officials said they were negotiating with Iran’s parliament “to identify proper legal resolutions,” seemingly in order to rescind the unofficial ban on competing against Israelis.

Iranians athletes have increasingly found themselves caught between domestic officials, who may punish them for competing against Israelis, and international officials, who will punish them if they forfeit matches. In recent years, an increasing number of Iranian athletes and coaches have spoken out against the policy.

The last competition between Iranian and Israeli teams on the international level dates back to a wrestling match in 1983 in Kiev, Ukraine.

The regime in Iran routinely encourages the demise of Israel, and funds, arms and trains terrorist organizations such as Hezbollah in Lebanon and Islamic Jihad in Gaza that avowedly seek the annihilation of the Jewish state. Israel has led international opposition to the 2015 P5+1 powers’ deal with Iran, which was intended to prevent Iran attaining a nuclear weapons arsenal, with Prime Minister Benjamin Netanyahu accusing the Iranians of lying about their nuclear weapons program and successfully lobbying US President Donald Trump to withdraw from the accord.

Times of Israel staff contributed to this report.

An Israeli judoka won a gold medal on Thursday at the Abu Dhabi Grand Slam judo tournament, but had to sing his own private “Hatikvah” because the organizers refused to play the Israeli national anthem.

He also had to celebrate his victory under the International Judo Federation’s flag, because the emirate banned the display of Israeli symbols.

Tournament organizers did not play Israel’s national anthem as Tal Flicker stood on the podium after receiving his medal in the men’s under-66 kilograms (145 pounds) category.

With the medal around his neck, Flicker sang his own “Hatikvah” while the International Judo Federation’s (IJF) anthem played in the background. 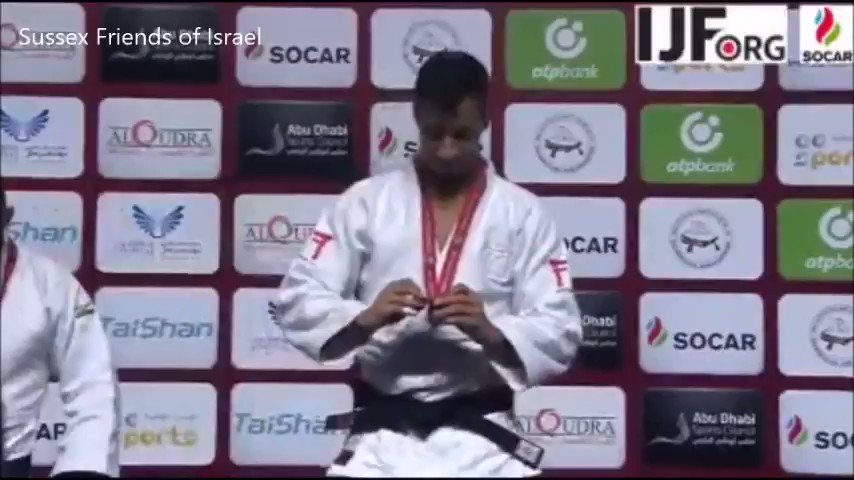 WATCH-DISGRACEFUL.
ISRAELI Tal Flicker presented with his gold medal at #JudoAbuDhabi2017 without Israeli anthem or flag. Nice to see Tal singing something and I’m guessing it’s the #Hatikvah@Ostrov_A

On the women’s side, Gili Cohen won bronze in the under-52 kilograms (114 pounds) class. The Israeli flag was not flown on her behalf either.

The entire Israeli team was required to compete without any Israeli identifying symbols, and had been told before the tournament that there would be no acknowledgement of their home country — a discriminatory policy imposed solely on the Israeli competitors.

Flicker said later that he made up his mind to sing his own “Hatikvah” on the podium from “the moment that I won the gold.”

“Israel is my country, and I’m proud to be Israeli,” he said, speaking to Channel 2 news from his hotel room. “The anthem that they played of the world federation was just background noise,” he said. “I was singing ‘Hatikvah’ from my heart.

“I’m proud of my country,” he said again. “The whole world knows that we’re from Israel, knows who we represent. The fact that they hid our flag, it’s just a patch on our flag.”

Asked whether he’d had reservations about competing in a tournament that would not recognize him and his colleagues as Israelis, Flicker said he had focused solely on winning a medal. Now that he’d done so, “I’m extremely happy.”

Ahead of the tournament on Monday, Flicker wrote on Facebook that even without the flag, “everyone in the world knows where we are from and what country we represent.”

“I am the most proud in the world to be Israeli,” he added.

The Israeli contestants were barred from wearing Israeli symbols on their uniforms at the tournament and were listed as representing the International Judo Federation. 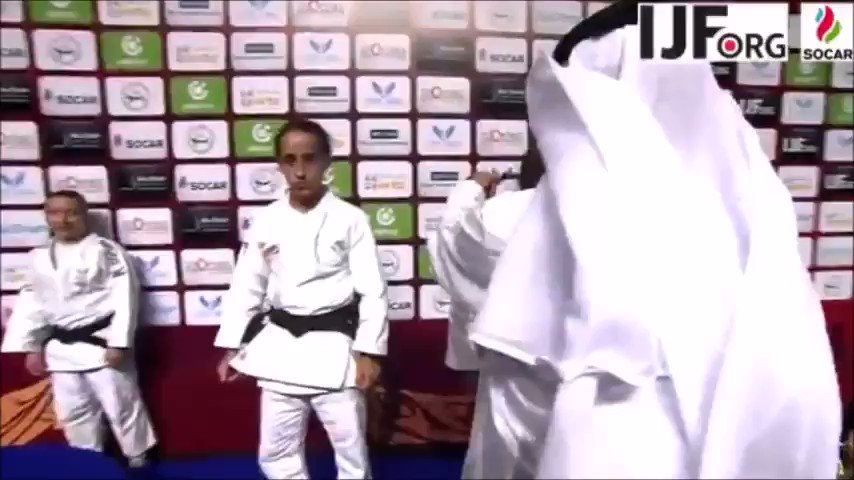 Israeli Judoka Gili Cohen presented with her bronze medal at #JudoAbuDhabi2017 but had to compete under @intjudofed flag because hosts wouldn’t allow any mention of the Jewish state! Mazeltov Gili.@Ostrov_A

The ban on Israeli symbols came despite the IJF’s demand before the tournament that the UAE treat Israeli athletes equally.

A letter from the IJF to the president of the UAE Judo Federation said “all delegations, including the Israeli delegation, shall be treated absolutely equally in all aspects, without any exception.”

It highlighted the body’s core ideals that “every individual must have the possibility of practicing sport, without discrimination of any kind.”

The letter was sent to the World Jewish Congress, which represents over 100 Jewish communities, and had asked the IJF to intervene and “protect the rights of the Israeli national judo team and keep the spirit of sport free of political discrimination.”

There was no comment Wednesday from the UAE, which has no diplomatic relations with Israel.

Muslim and Arab states or athletes often boycott Israeli competitors. An Egyptian judoka refused to shake hands with his Israeli opponent at the Rio Olympics last year. Tunisia’s tennis federation ordered the country’s top player to withdraw from a match against an Israeli opponent at a tournament in 2013.

Culture and Sport Minister Miri Regev said it was of “utmost importance” that her country’s athletes display the flag and sing the national anthem at international competitions. She said boycotting the competition would only “play into the hands of those refusing to recognize our existence,” and would hinder Israel’s future sporting achievements.

Israeli judokas were also banned from displaying any Israeli symbols at a 2015 tournament in Abu Dhabi.