(THIS ARTICLE IS COURTESY OF THE SUNDAY EXPRESS)

Authorities urged people to stay indoors and to stay away from coastal areas as the storm brought heavy rain, strong winds and surging seas.

At least 27 people have suffered minor injuries, according to civil defense officials.

The storm was the most intense overnight bringing localized flooding and uprooting thousands of trees.

More than 300,000 homes have lost power, the commander at the Civil Protection Agency said.

Power authority EDP said more than 200 power lines were affected by the storm.

Over 60 people were forced to leave their homes. 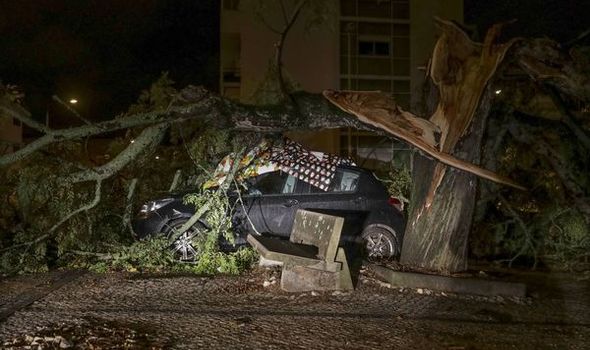 Portugal’s weather service had issued red warnings or dangerous coastal conditions for 13 of its 18 mainland districts.

A resident of Figueira da Foz described the storm like a war zone.

They told SIC television: “I have never seen anything like it, The town seemed to be in a state of war, with cars smashed by fallen trees. People were very worried.”

The main motorway in Portugal was blocked by a fallen tree preventing services from traveling. 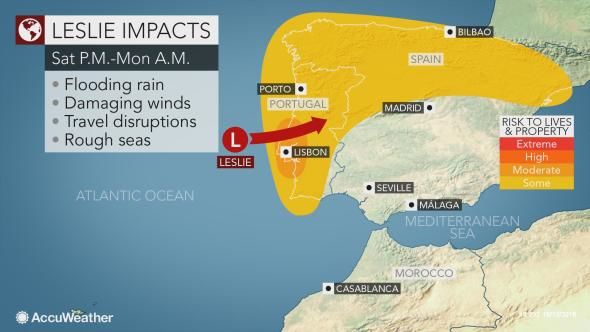 The latest forecast for the storm (Image: ACCU-WEATHER)

Hurricane Leslie was downgraded to a tropical storm and by Sunday morning most of the powerful winds and heave rains had subsided.

Spain and southern France have also been affected by the powerful storm.

Flood warnings have also been issued in the north and northwest of the country for today. 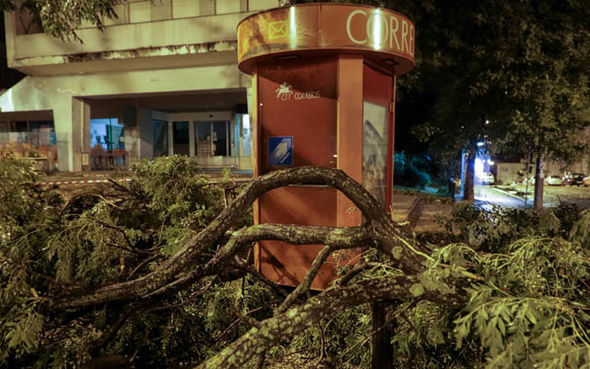 Parts of southern France have also been put on alert for storms and flooding.

The storm formed on September 23 and spent weeks in the Atlantic Ocean before coming to the Iberian peninsula.

It was hovering over the Atlantic for so long because it didn’t encounter a strong enough weather system to force it towards land, according to Accu-weather.

It is rare for an Atlantic hurricane to hit the Iberian peninsula as only five have been recorded.

The last tropical system to follow in Leslie’s path was Vince in 2005.