(THIS ARTICLE IS COURTESY OF TRIVIA GENIUS)

It is hard to believe it in this age of frequent flier miles and airplane trips across the world, but flying was once thought to be an impossible dream. People looked to the skies but didn’t know how to get there—until the late 1800s, when all of that changed forever. Here are four stars from the early days of aviation, who inspired people to believe that anything was possible.

Bessie Coleman was both the first African-American woman pilot and the first Native American pilot. Born in Atlanta, Georgia, she grew up with 12 siblings, which is perhaps one of the reasons she was born with a desire to stand out among the crowd. When one of her brothers came home from World War I full of stories of French female pilots, a flame was lit inside of Bessie, and her dream became learning to be a pilot herself. Unfortunately, no schools in America would take her because of her race. She was determined to succeed, though, so when an African-American newspaper publisher named Robert Abbott offered to pay for her to attend flight school in France, she jumped at the chance. She learned to fly and became widely known for her trick flying, which she then refused to display in any segregated venues. It was her goal to inspire women and African-Americans all over the world, and she did just that, prompting many of them to become pilots themselves.

Charles Lindbergh is one of the most famous aviators in history. In 1927, he made the first solo non-stop flight across the Atlantic Ocean, a feat that inspired fellow pilot Amelia Earhart to do it herself a few years later. Also known as “Lucky Lindy,” fans all over the world adored Lindbergh for his soft-spoken nature and his clear skill as a pilot. He earned this reputation, not just for that innovative flight, but for all the ones that came before it. He was the first in his class in military flight school and he won several prizes for his incredible flying talent. He also had an intriguing perspective on flying, describing the experience by saying “There were times in an aeroplane when it seemed I had escaped mortality to look down on earth like a God.”

Harriet Quimby was a rarity in her time: a bold, flashy woman who didn’t abide by the standard rules set for her gender. Having grown up as a “tomboy full of verve and spunk who was ready to try anything,” Quimby began her career as a newspaperwoman. She loved interacting with different people, and hearing different stories, but soon she became restless. She wanted to do more, be more, and find a bigger challenge. She found that challenge when she began covering aviation-related stories for the paper. Originally she was just writing about how women should dress for a flight, but soon she began to pursue aviation as a career in her own right, becoming the first American woman to earn a pilot’s license. She then went on to become the flashiest “aviator/cover girl” there was, decking herself out in a purple satin flying suit that made her look like everyone’s dream of the perfect flying woman. Eventually, though, it became less about looks and more about substance, as she wrote articles detailing how to ensure a safe flight for the other female pilots who would come after her.

Rounding out our list of famous early aviators is Howard Hughes. Hughes was not just a pilot, he was also a manufacturer, a movie producer, and a director. He came from a wealthy family, whose riches came from his father’s invention of a rotary bit for drilling oil wells. After his parents died, Hughes took over his father’s tool company, eventually selling it for billions of dollars. He then went on to make many quirky movies in Hollywood, which is where he became intrigued by aviation. He founded the Hughes Aircraft Company in California and designed his own airplane, which he then used to set the fastest land speed record of 352.46 miles. Never one to do anything halfway, he also lowered the transcontinental flight time record to 7 hours and 28 minutes, then later flew around the entire world in a little over 91 hours. In addition to his own planes, he also bought shares of other aviation companies and became one of the richest aviators of all time before going into self-imposed seclusion for the rest of his life.

(THIS ARTICLE IS COURTESY OF THE LOS ANGELES TIMES)

In taking off from the Mojave Air and Space Port, the plane brought closer to reality the dream of launching satellites from the air. The idea is that the aircraft — which has conjoined-twin fuselages and is powered by six Boeing 747 engines — would eventually hoist a rocket carrying a satellite to a higher altitude before releasing it to blast into space.

“For a first flight, it was spot on,” test pilot Evan Thomas told reporters on a conference call not long after the plane landed back in Mojave. “For the most part, the airplane flew as predicted …. Systems on the airplane ran like a watch.”

Thomas said “a few little things” cropped up, but he did not specify what they were. 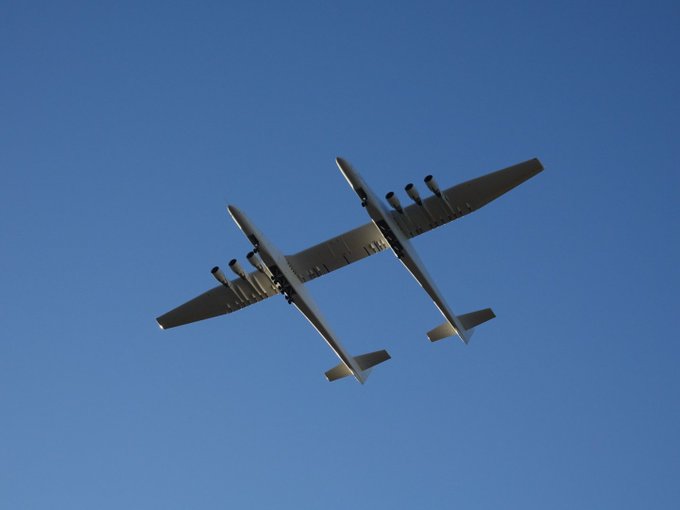 She is big but lean! A shape for the ages. #Stratolaunch @NASASpaceflight

When Stratolaunch founder Paul Allen died last October, that led to speculation about the company’s future.

“It’s never been a market-driven company,” Chad Anderson, chief executive of Space Angels, a global network for early-stage space industry investors, said this year. “It’s been a passion project of a really wealthy individual. And now that individual is gone.”

Allen, a Microsoft Corp. co-founder, was not the only one pursuing this approach to commercial spaceflight.

In November, Richard Branson’s small-satellite launch firm Virgin Orbit flew its modified Boeing 747 with a rocket attached beneath one of its wings for the first time, marking a step toward its first test launch. The Long Beach company’s goal is to send small satellites into orbit via rockets released from the plane’s wing mid flight.

Seattle-based Stratolaunch has pared back its plans since Allen’s death. In January it said it would cease development of a rocket engine and two planned satellite-launching rockets as well as a rocket-powered plane that could take a crew to space.

Stratolaunch described that retrenchment, which reportedly included dozens of layoffs, as “streamlining operations.” It said that would enable it to focus on conducting a first test flight of its massive satellite-launching plane — a goal it achieved Saturday — and on conducting a test launch of a Pegasus XL rocket from the plane.

At 385 feet wide, the Stratolaunch plane’s wingspan is bigger than that of any other aircraft. The plane’s twin fuselages — which make the craft sort of the airplane equivalent of a catamaran — are 238 feet long.

The previous wingspan leader was Howard Hughes’ World War II-era eight-engine H-4 Hercules flying boat, nicknamed the Spruce Goose. Surviving in an aviation museum in Oregon, it has an approximately 320-foot wingspan. Its fuselage is just under 219 feet long.

Although Stratolaunch calls its aircraft the world’s largest, other airplanes exceed it in length from nose to tail. They include the six-engine Antonov AN 225 cargo plane, which is 275.5 feet long, and the Boeing 747-8, which is just over 250 feet long.

The Associated Press was used in compiling this report.