5 Beautiful Temples to Visit in China

China is one of the world’s most innovative and progressive countries, yet step away from the modernity and you’ll discover a country that maintains a firm grip on its ancient cultures and spirituality. There’s hundreds of fascinating temples and shrines scattered across this great land that offer a glimpse into the centuries-old philosophies of Buddhism and Taoism. To see them all could take a lifetime, so we’ve chosen five of the most beautiful to get you started.

Constructed during the Western Xia dynasty, this 2nd-century temple is one of the last-surviving wooden landmarks from the era located in China. It’s often called the “Great Buddha Temple”, a reference to the 115-foot-long sleeping Buddha that greets you in the main hall. Sculptures of arhats, who are Buddhists that have gained enlightenment, surround the giant statue, as do murals of classic Chinese stories such as Journey to the West and Classic of Mountain and Seas. Legend states that a Yuan Dynasty queen lived there and gave birth to the Mongolian warrior Kublai Khan.

Little can prepare you for your first sight of this series of pagodas set precariously on a cliff face at the base of Mount Heng. Time Magazine included the temple in its list of Top 10 Precarious Buildings, and it is easy to see why when studying the interconnecting walkways and long supporting stilts, which are embedded into the rocks. Despite giving the impression that it will fall at any moment, the temple has stood firm for 1,400 years. Even more impressive when it is said the foundations were laid by a solitary monk. In addition to its magnificent structure, the temple is the only place in China where Buddhism, Confucianism and Taoism are all practiced.

Established in 1709, Labrang Monastery plays host to the largest group of monks outside of Tibet and, at one point, provided residence for up to 4,000 of them. A great way to experience its serene beauty is to follow the inner kora, a 2.2-mile pathway of prayer wheels that pass numerous chapels and temple halls. Guided tours provide access to some halls and the chance to observe the monks’ activities first hand. Get here at sunrise to see the monks praying, or come at dusk to hear them chanting sutras.

On an almost 1-mile long stretch of the Yi River waterfront is a collection of 2,300 caves that have existed since around 493 A.D. Each cave is etched into limestone cliffs and features some of the finest known examples of art from the Northern Wei and Tang dynasties. There’s over 110,000 statues and 60 Buddhist pagodas. Among the most striking statues are the huge Buddhas in the Guyangdong Cave and Three Binyang Cave. Such is the value of the caves that they have been recognized as a UNESCO World Heritage Site.

In the heart of Beijing is a masterpiece of Chinese architecture that dates back to 1406. The main temple, the triple-tier circular Hall of Prayer for Good Harvests, stands magnificently on a square marble base. This square-round contrast stems from the ancient Chinese belief of a round heaven and square Earth. The four inner, 12 middle, and 12 outer columns of the hall’s brightly-colored interior symbolize the four seasons, 12 months, and 12 Chinese zodiac hours. Landscaped gardens and pine woods encompass the temple and the entire complex is a UNESCO World Heritage Site. 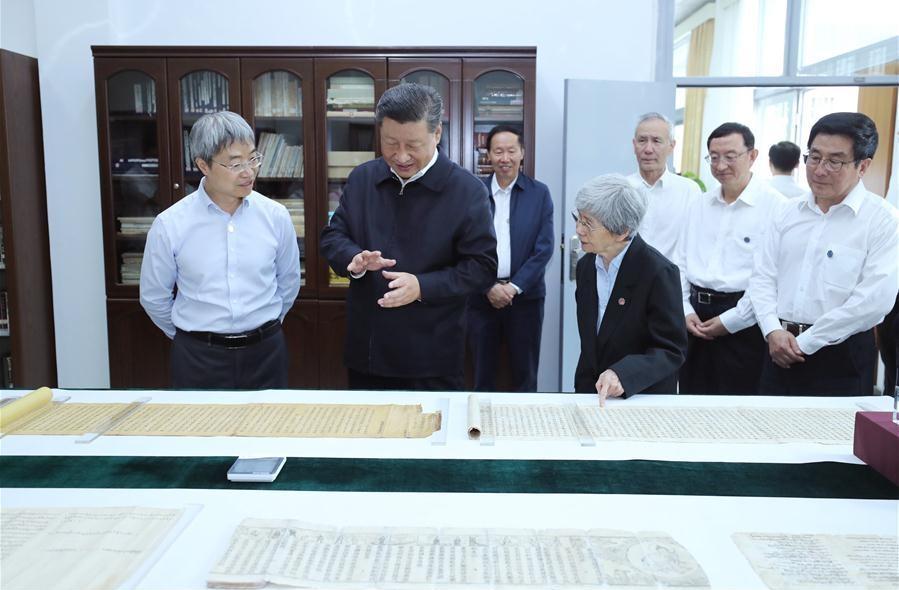 Chinese President Xi Jinping, also general secretary of the Communist Party of China Central Committee and chairman of the Central Military Commission, visited exhibitions of relics and research results and attended a symposium with experts, scholars and representatives from cultural units in the Dunhuang Academy in Dunhuang during his inspection tour of northwest China’s Gansu Province on August 19, 2019.

Xi Jinping, general secretary of the Communist Party of China Central Committee, has called for well preserving the quintessence of Chinese culture.

Xi made the remarks on Monday at a symposium at Dunhuang Academy with relevant experts, scholars and representatives from cultural units, during his inspection tour of northwest China’s Gansu Province.

He also called for more efforts in cultural exchanges with other countries and learning from the outstanding achievements of civilizations from around the world.

During the inspection tour on Monday, Xi visited the Mogao Grottoes in Dunhuang, a key cultural heritage site under state-level protection.

Dunhuang culture shows the Chinese nation’s confidence in its culture, Xi said. “Only a self-confident civilization can absorb and draw on the achievements of other civilizations while maintaining its own characteristics.”

Xi also encouraged workers in the cultural sector to well tell the stories of Dunhuang and China.

During his visit to the Mogao Grottoes, Xi talked with tourists there and wished them a pleasant journey.

Dunhuang is home to the Mogao Grottoes, a renowned UNESCO World Heritage Site boasting rich collections of Buddhist artwork — more than 2,000 colored sculptures and 45,000 square meters of murals — in 735 caves along a cliff.

The Mogao Grottoes, first constructed in 366 AD, symbolizes the great achievements of China’s Buddhist art from the 4th century to the 14th century. It showcases the cultural integration and mutual learning among the diverse civilizations along the ancient Silk Road.

(THIS ARTICLE IS COURTESY OF CHINA’S ‘INDEPENDENT’ NEWS NETWORK)

A man found guilty of raping and killing 11 girls and women in China has been put to death.

Gao Chengyong, 54, became known as China’s “Jack the Ripper” after his 2016 arrest for the horrific mutilations he carried out on his victims between 1988 and 2002.

Police said he targeted women dressed in red, whom he followed home before robbing, raping and murdering them – often by cutting their throats.

Gao’s first murder was in 1988 – the same year his son was born. He raped and killed a 23-year-old woman, stabbing her 22 times. Her body was eventually found by her mother, but her hands and other body parts were never located, according to the People’s Daily China.

A subsequent spate of similar murders caused panic in the region and many women in Baiyin would not walk anywhere alone.

In 2004, with evidence indicating the crimes were linked, but making little headway with the investigation, police offered a reward for information leading to an arrest.

At the time, based on footprints, fingerprints and DNA, they said they were looking for a man aged between 33 and 40.

“The suspect has a sexual perversion and hates women,” the police said, according to the People’s Daily China. “He’s reclusive and unsociable, but patient.”

But it took another 12 years before a breakthrough came.

Gao’s uncle was arrested early in 2016 for a “minor crime” and a DNA sample was taken. The sample closely matched that found by forensics teams at the murder scenes, and police determined he was a relation to the killer they had been after for 28 years.

Police linked Gao with the crime and covertly collected a DNA sample which proved to be a direct match for the killer.