We like to celebrate but for what we seldom care

Celebrations are for memories of good times past

Birthdays of our families or for those of which we care

Holidays are days we hope we can stay away from work

Solemn Bugle Rings Flags half staff does it mean anything

Christmas or Easter why should anyone ever think of why

Every Holiday we create is just the economies way to spin

Yet Turkey and Football bring a family together once a year

Relatives of a victim of a blast at St. Anthony’s Shrine, Kochchikade, react at the police mortuary in Colombo, Sri Lanka, on Sunday.
Dinuka Liyanawatte/Reuters

A series of bomb blasts struck luxury hotels and churches across Sri Lanka early Sunday. More than 200 people were killed and 560 injured in the coordinated attacks, which have put the entire country on lockdown.

The first wave of bombings struck at the heart of the country’s minority Christian community during busy Easter services at churches in the cities of Colombo, Negombo and Batticaloa. 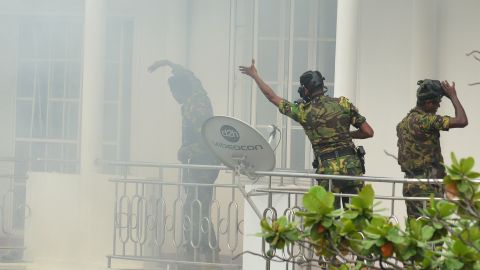 Sri Lankan Special Task Force personnel gesture outside a house during a raid following an explosion at a property in the Orugodawatta area of Sri Lanka’s capital, Colombo.
Ishara S. Kodikara/Getty Images 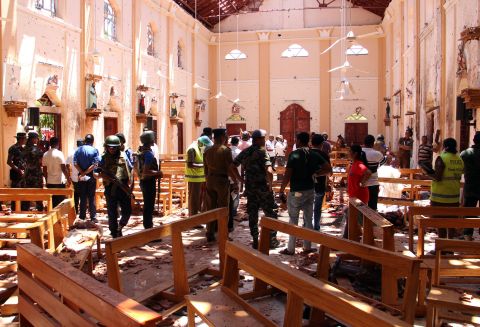 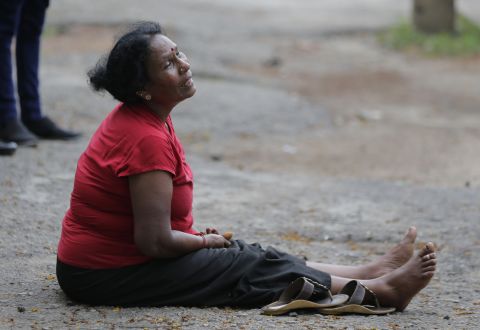 A relative of a blast victim grieves outside a morgue in Colombo, Sri Lanka.
Eranga Jayawardena/AP 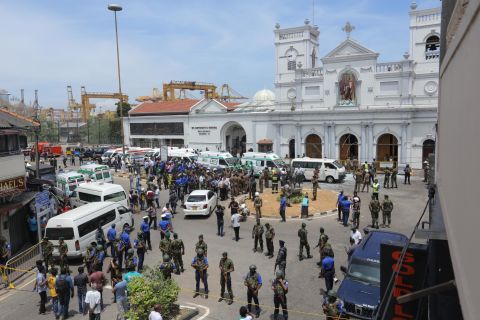 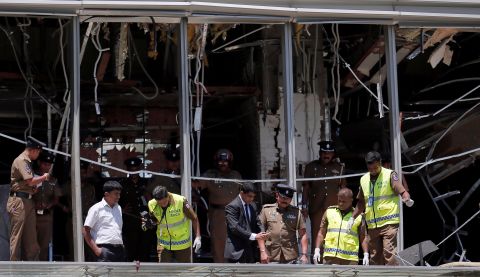 Crime scene investigators inspect the scene of an explosion at the Shangri-La hotel in Colombo.
Dinuka Liyanawatte/Reuters 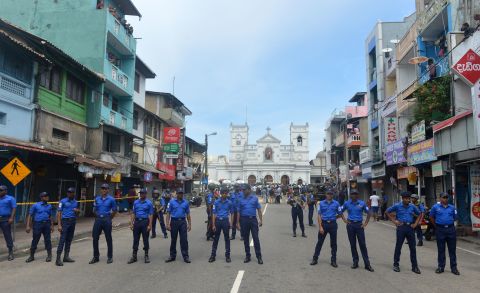 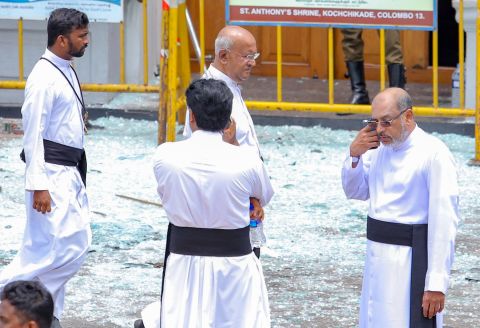 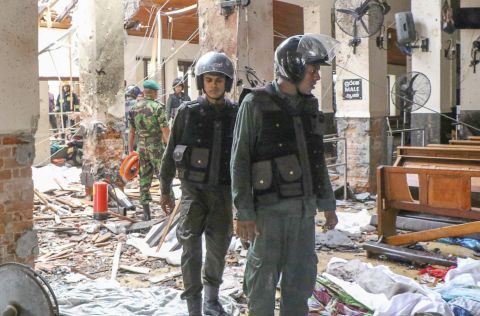 Security forces inspect the inside of St. Anthony’s Shrine after an explosion hit the church.
Anadolu Agency/Anadolu/Getty Images 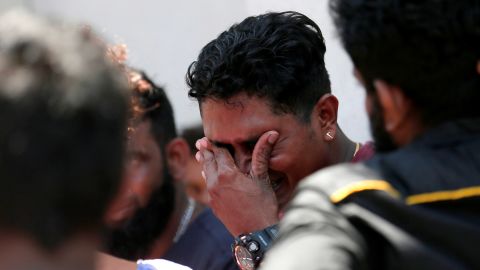 A relative of a victim of an explosion at St. Anthony’s Shrine reacts at the police mortuary in Colombo.
Dinuka Liyanawatte/Reuters 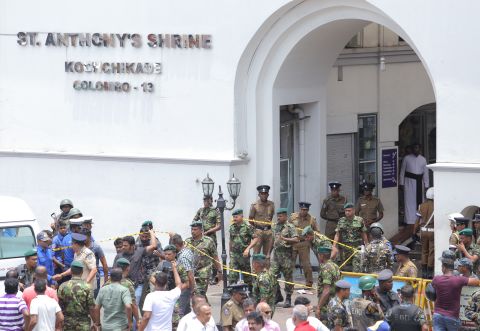 A minibus carrying young students collided with a truck and burst into flames in South Africa on Friday, killing about 20 children.The victims were between 5 and 10 years old, said Russel Meiring, a spokesman for paramedic company ER24. He said several children survived after being pulled from the wreckage near Bronkhorstspruit, east of the capital, Pretoria.

Images posted by ER24 on Twitter show the crumpled, smoking minibus on its side next to the truck.

Authorities were investigating the cause of the crash. “We are trying to find out exactly what happened,” Meiring said.

Some students who were trapped in the minibus were burned beyond recognition, the News24 website reported. It quoted Johan Pieterse, spokesman for the EMS paramedic company.

Transport minister Joe Maswanganyi expressed condolences to the families of the dead. In an interview with the eNCA news outlet, he said many accidents occur because of reckless driving and that increasing the police presence on the roads would have limited results.

“If human behavior doesn’t change, there isn’t much that police can do,” he said.

A total of 235 people died in accidents on South Africa’s roads during the recent Easter period, a 51 percent increase over the same period last year, according to the country’s Road Traffic Management Corporation.

Why do Christians keep inviting you to church?

By Ed Stetzer, Special to CNN 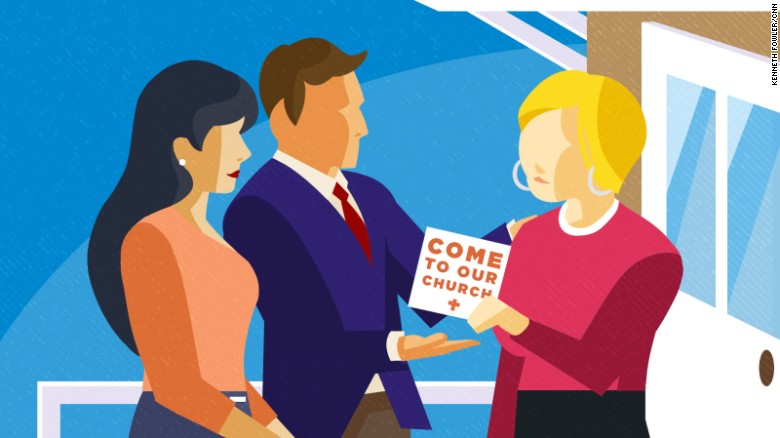 As Easter approaches, many churches are stepping up their outreach.

Ed Stetzer holds the Billy Graham Distinguished Chair of Church, Mission, and Evangelism at Wheaton College and is the executive director of the Billy Graham Center for Evangelism. The views expressed in this column belong to him.

(CNN)“Hey, do you want to come to church with us on Easter?”

You may have heard this or something similar from a friend, co-worker or family member. Depending on where you live, perhaps you’ve already received a mailer or two about a local church service.
Maybe you’ve wondered why Christians like me won’t just leave you alone. I assure you, it’s not because we like imposing ourselves on others. In fact, for many of us, it’s just the opposite.
On a recent Sunday, I stood up at Moody Church, an evangelical church in Chicago where I am interim pastor, and encouraged people to invite their friends to our Easter services. I reminded the congregation that Christians should be committed to the task of evangelism, that Jesus commanded it.
But I also know that, to atheists or adherents of other faiths, it can be confusing to know how to respond to such outreach. Understanding our motivation may help.

The fact is churches are gearing up for Easter like pizza places are for the Super Bowl. They know this will be the biggest Sunday attendance of the year, Christmas included. Many members will have brought guests, and pastors want to be sure to preach a compelling sermon.
For many churches, including mine, we actually prayed over cards with names on them — the names of people to whom our church members were reaching out — so they might have open hearts.
I imagine some react in horror to that statement thinking: How dare anyone try to convert someone to another religion?
That makes sense in a world where spirituality has been Oprah-fied, and in a culture that says it’s fine to believe what you want as long as you don’t try to convince anyone else to believe differently.
It works great, if not for one reality: the words of Jesus.
You see, Christianity is a missionary faith because of the life and teachings of Jesus. Sure, you probably know the teachings of Jesus that fit in our culture: “Do unto others as you would have them do unto you,” for example. And the world would be a better place if we all did those things.
But Jesus had many other teachings as well — and they’re just as important. After his resurrection, but before his ascension to heaven Jesus said some things that explain why Christians are still evangelizing.
Christians call these commands commissions, and they include: “Go and make disciples of all nations” (Matthew 28:19); “You will be my witnesses” (Acts 1:8); and “As the father has sent me, I am sending you” (John 20:21).
These are the last earthly words of Jesus before his ascension. That gives them an even greater weight to many who believe his last words should be our first priority.

Some people may think “proselytize” is a dirty word, but that depends on how you define and practice it. Proselytize means to convert someone to another belief or opinion. And the truth is, we all do it — or at least try to. We try to convince our buddies that our sports team is better, our wives that this restaurant serves tastier food, our children that smartphones aren’t actually as interesting as adults make them seem.
We proselytize because we deeply believe what we are sharing is important enough to expend our energy and enthusiasm. For Christians, they share because they truly believe the founder of the faith told them to, and that his message changes people.
And some people — even atheists — appreciate our efforts.
Comedian Penn Jillette, a well-known nonbeliever, explained how he responded to someone sharing a Bible with him:
“I don’t respect people who don’t proselytize. If you believe that there’s a heaven and hell … and you think, ‘Well, it’s not really worth telling them this because it would make it socially awkward’… how much do you have to hate somebody not to proselytize?”
I get that Christians who are proselytizing seem out of step in modern, live-and-let-live America, but when you are a Christian, you don’t get to pick and choose which of his commandments to obey.
I understand that some non-Christians think Christians who share the good news are being intolerant.
Admittedly, some Christians have been intolerant at times throughout history, seeking conversions through unethical means. However, sharing our faith itself is not intolerant, but in fact is something that shows we really believe what Jesus said and we care about those around us.
Tolerance means more than acceptance of different people’s beliefs, sometimes it also means listening to them. And when a whole lot of people believe there was a guy who was dead on Friday, and alive on Sunday, that’s something worth explaining, particularly at Easter time.
So, please don’t be offended.
Your Christian friends, neighbors, family members or co-workers are mustering up some courage because they care enough to reach out to you. They believe they’ve seen lives changed and are following a person whom they believe guides them toward faith and good works.
Don’t be shocked that your friends think Jesus’ last words should be their first priority — particularly around Easter, the day when they believe he came back from the dead. Their sharing with you means they care enough to get uncomfortable.
Trust that it comes from a good place and take a moment to hear them out.