From the moment he laid his stubby hands on that glowing orb in Riyadh, Donald Trump signaled to the world what kind of leader he aspired to be. Bathed in a spectral light, standing alongside the Saudi King Salman and the Egyptian dictator, Abdel Fatah al-Sisi, the man formerly known as the leader of the free world smiled with self-satisfaction that he had arrived at his chosen destination.

Despite the object’s likeness to the orb of Saruman, this was no secret society of evil wizards. Instead, it was a brazenly open society of corrupt old men with a clear disregard for the rule of law, if not a cruel desire to brutalize their opponents.

The fact that they were standing in the Global Center for Combating Extremist Ideology was either an exercise in paper-thin deception or some kind of sick joke. It’s hard to express your disgust at Isis beheadings, as Trump has done, but feel nothing about the Saudi beheadings of 48 people in just four months this year. 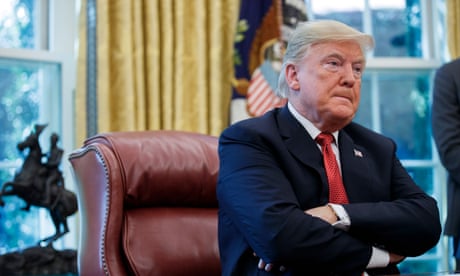 Then again, we’re talking about Donald Trump’s feelings and his limitless capacity to lie. Of course it’s possible to condemn the “bloodthirsty killers”of Isis at the UN, and praise the “unbelievable job” of the death squads of President Duterte in the Philippines. He’s Donald Trump, a bear of very little brain who convinced himself that someone in China thinks he has a “very, very large brain”.

As a self-certified genius, Trump now finds himself in something of a Saudi pickle. The supposedly reformist crown prince Mohammed bin Salman was supposed to help him clean up the world by taking on Tehran. But Saudi Arabia can’t even clean up an Istanbul consulate after their own goons are alleged to have hacked to death a single troublesome journalist.

First Trump promised “severe punishment” for those responsible for Jamal Khashoggi’s death, albeit punishment that didn’t harm any arms contracts the Saudis were interested in. No matter that the Saudis can’t easily substitute another country’s weapons after spending gazillions of dollars on US ones. This commander-in-chief obviously knows his arms from his elbows.

Then Trump spoke to the crown prince, who pinky-promised he had nothing to do with the 15 men identified by the Turkish media as belonging to a grisly hit-squad, which reportedly included an autopsy specialist carrying his own bone saw. So the 45th president of the United States gullibly and dutifully bleated something about “rogue killers” and “very, very strong” denials. In what is surely a remarkable coincidence, Saudi sources leaked word that they were preparing to admit the killing, but insisted it was an interrogation that went wrong.

Interrogations tend to go wrong when they include someone armed with a bone saw.

To clear up this most unfortunate dismemberment, Trump sent his trusted former CIA chief, now the secretary of state, Mike Pompeo, on a fact-finding mission to Riyadh and Ankara. Pompeo’s approach to the facts was hardly inspiring. “I don’t want to talk about any of the facts,” he said. “They didn’t want to either, in that they want to have the opportunity to complete this investigation in a thorough way.”

That would be an investigation by the crown prince into his own security detail inside his own consulate. Naturally, these things can take time. People are busy. Consulates are hard to find. Word from the palace takes time to write down on parchment scrolls.

Oh yes, and there’s this other thing we need to remember, Pompeo explained: money.

“I do think it’s important that everyone keeps in mind that we have a lot of important relationships – financial relationships between US and Saudi companies, governmental relationships – things we work on together all across the world. The efforts to reduce the risk to the United States of America from the world’s largest state sponsor of terror, Iran.”

If you’re thinking Trump himself is compromised by Saudi money, why, that’s no more true than the notion that he’s compromised by Russian money. But don’t take my word for it, take his.

“For the record, I have no financial interests in Saudi Arabia (or Russia, for that matter),” he tweeted, dismissing anything to the contrary as so much fake news. This is a touch embarrassing for the Donald Trump who told an Alabama rally in 2015 that he loved doing business with the Saudis. “They buy apartments from me,” he said. “They spend $40m, $50m. Am I supposed to dislike them? I like them very much!”

Of course, you’re only supposed to dislike the ones carrying the bone saws.

The Trump administration is not the first to bow and scrape to the Saudi power of oil and cash. But it is the first to surrender all pretense of upholding democracy and human rights – commonly known as American values – while making pathetic excuses for what is widely accepted to have been a barbaric murder. What is the moral difference between Iran sponsoring Hezbollah and the humanitarian disaster triggered by the Saudi attacks and blockade in Yemen?

Jamal Khashoggi affair is proving a critical test for US diplomacy

Their incompetence is only matched their greed; their grand visions of global leadership look as genuine as Jared Kushner’s Middle East peace plan, or the official Saudi investigation into what happened to Khashoggi.

Like all pathological liars, they now find themselves caught in their own web of deceit and delusion. The crown prince was never a reformist, just as the reality TV star was never going to drain the swamp.

After a couple of days of pesky questions about whether his friends decapitated a journalist, Trump had reached the limit of his very, very large brain. “Here we go again with, you know, you’re guilty until proven innocent,” he told the Associated Press. “I don’t like that. We just went through that with Justice Kavanaugh and he was innocent all the way as far as I’m concerned.”

If you’re still looking for an illustration of how the rule of law collapses, here’s one straight from the horses mouth. The bone-saw-wielding Saudis are as innocent as our own supreme court justice. At this point, a good lawyer might rest her case because this sucker just can’t stop talking.

(THIS ARTICLE IS COURTESY OF THE NEW YORK TIMES AND REUTERS)

Both leaders invited each other to their respective nations

Donald Trump invited Philippines President Rodrigo Duterte to the White House in 2017 during a telephone conversation, according to an aide to Duterte.

Reuters reported on Friday that the conversation between the two had been described by Duterte aide Christopher Go as a “very engaging, animated” one, lasting more than seven minutes. Some have drawn similarities between the two leaders based on their unexpected rises to power and their controversial statements and provocative personalities. Immediately after the U.S. election last month, Duterte extended an olive branch to Trump, despite fractious relations between the two countries since the Philippine Presidential election in May this year.

Duterte also invited Trump to the Philippines next year when the country chairs the Association of South East Asian Nations (ASEAN), Go said. It is tradition for the U.S. president to attend the proceedings. At the summit in October, Duterte called President Obama the “son of a whore.”