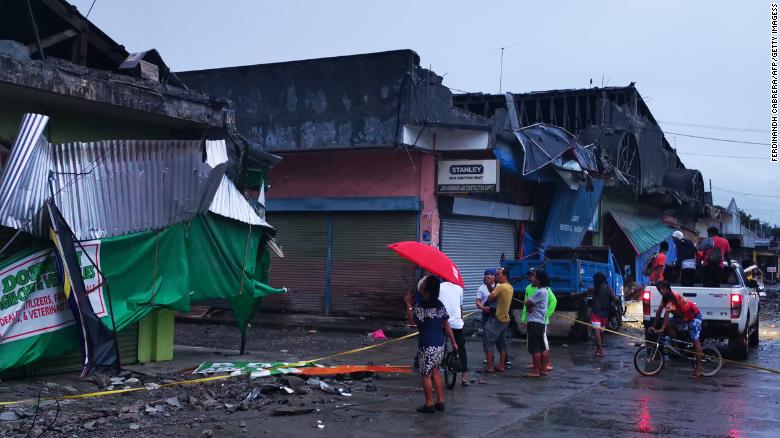 Sunday’s quake is the latest in a serious to strike the island in recent months.

Manila, Philippines (CNN)A six-year-old girl was among three people killed when a 6.8-magnitude earthquake struck the southern Philippines island of Mindanao on Sunday.

The girl was inside her family’s house when the building collapsed and killed her, the province’s governor, Douglas Cagas, told CNN. 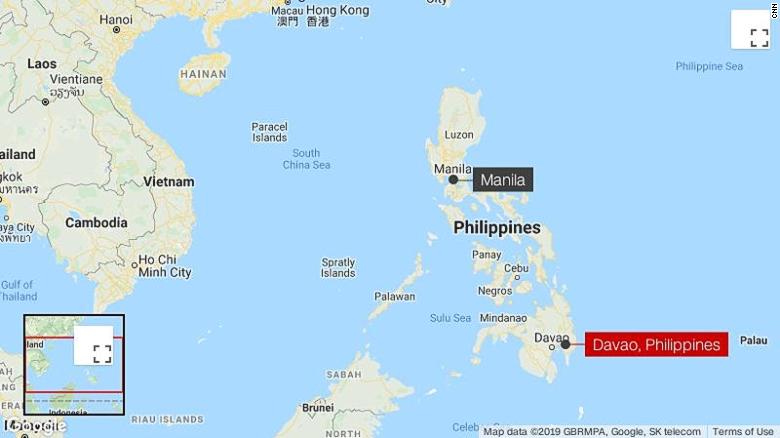 The quake struck the island of Mindanao and its largest city, Davao.
Fire Service director Chief Superintendent Samuel Tadeo confirmed the three deaths and also said a market in Padada had collapsed.
The country’s second-largest island is a popular tourist destination, and videos posted on social media showed hotel pools dramatically overflowing and mass evacuations of shoppers from malls.

3,859 people are talking about this
Residents reported schools had been severely damaged — luckily empty of students at the time, as the quake happened on a Sunday. Governor Douglas Cagas of the island’s Davao del Sur province said a three-story building had also collapsed.
Classes have now been suspended for Monday, and bridges closed due to cracks, Davao city officials said.
The country’s President Rodrigo Duterte was at his home in Davao, the largest city on the island, at the time of the quake, reported state-run Philippine News Agency (PNA). He was unhurt, although his house reportedly “sustained several cracks in the walls.” 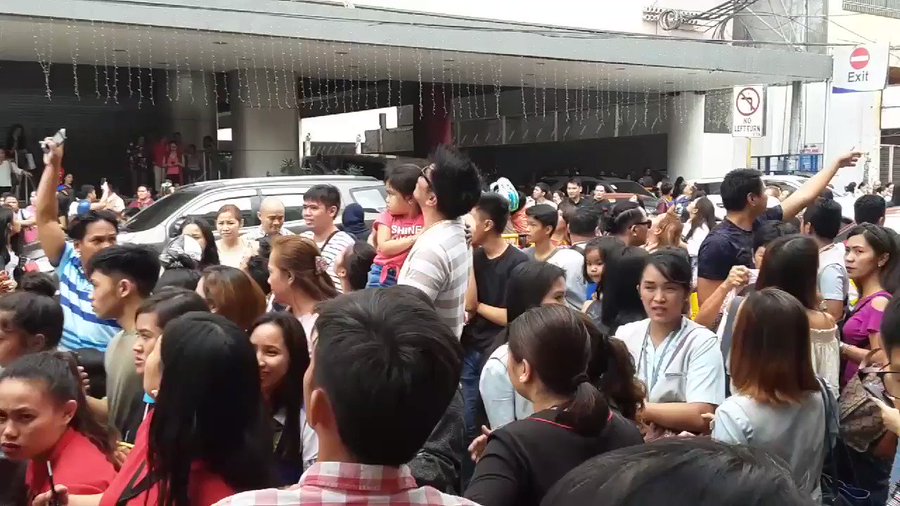 21 people are talking about this
There were several aftershocks in nearby provinces, including a 5.0 magnitude, according to the US Geological Survey. It added that there was no tsunami threat, as the quake struck inland and not the water.
It’s the latest in a serious of quakes to strike the island in recent months. In October another series of 6.6 and 6.5-magnitude quakes struck Mindanao, killing 14 and injuring more than 400.

MANILA — Fire crews battling an enormous blaze that tore through a shopping mall in a southern city in the Philippines, trapping at least 37 people, pulled one body from the building, the mayor said on Sunday.

But the vice mayor said there was “zero” chance of survival for the other 36.

Firefighters have been unable to enter the mall in Davao City after the fire started on Saturday morning, the vice mayor, Paolo Duterte, said.

“Our firemen are still struggling to find a way in as the fire is still burning,” Mr. Duterte said. He said of those still trapped inside, “Their chances of survival is zero.”

Mayor Inday Sara Duterte said that one body had been recovered and that rescuers’ priority was now to find all those who are missing.

“Do not stop until you find the 37,” she said, calling the mall fire “an unfortunate incident.”

The blaze erupted as city officials and emergency-relief workers were trying to rescue survivors of flash floods and landslides unleashed by Tropical Storm Tembin elsewhere in the region. The storm slammed into the eastern portion of Mindanao late Thursday, dumping torrential rains.

By Sunday, the death toll stood at 231, officials said, with scores more missing.

President Rodrigo Duterte, the father of Davao City’s mayor and vice mayor, visited the mall on Saturday night and met with family members of those inside. Photographs released by his office showed him consoling relatives and wiping tears from his eyes.

Understand the world with sharp insight and commentary on the major news stories of the week.

Sign Up
You agree to receive occasional updates and special offers for The New York Times’s products and services.
https://www.google.com/recaptcha/api2/anchor?k=6LeN0R4TAAAAACwPa5WX2QYE0npOf2-2veTOm2Tp&co=aHR0cHM6Ly93d3cubnl0aW1lcy5jb206NDQz&hl=en&v=r20171212152908&size=normal&cb=o2opbk7xmr3k

The president, who was previously mayor of Davao City and was in town for the holidays, “assured the relatives of the victims that the government would extend help,” said Harry Roque, Mr. Duterte’s spokesman.

The cause of the fire remains unknown. Officials said the blaze started near a furniture store on the building’s third floor. Many locals were doing their Christmas shopping, and employees were wrapping up their workweek before the holiday. Officials said many of the people trapped inside worked at a call center inside the mall.

More than 24 hours later, the building remained on fire and was too dangerous to enter, the authorities said.

“We are currently coordinating with the authorities,” said Thea Septaan Padua, a spokeswoman for the mall, adding that for now, no deaths had been confirmed.

The authorities have been on heightened alert amid fears that Islamist militants could target shopping malls and other public areas. In September, when the president was visiting Davao, militants who claimed allegiance to the Islamic State bombed a night market in the city, killing 15 people. 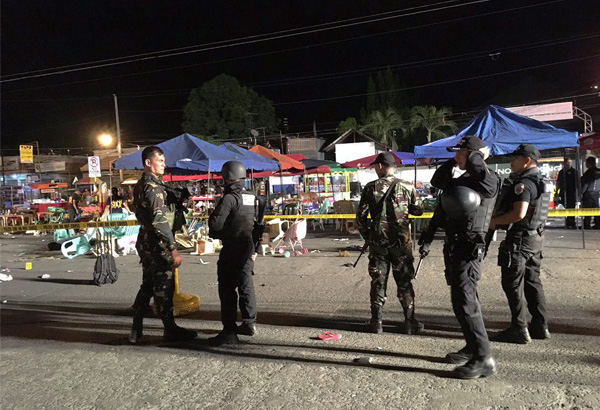 DAVAO CITY, Philippines – A powerful blast ripped through a crowded public market in this city before midnight last night, killing 10 people instantly and leaving more than 60 others wounded.

The blast occurred in the massage area of the popular Roxas night market, which was packed with people relaxing at the end of the workweek in bars, massage parlors and roadside food stalls.

Vice Mayor Paolo Duterte, who is acting mayor in lieu of his sister Sara, ordered establishments in the market temporarily shuttered as the area was cordoned off by police and a lockdown was ordered in the city.

The blast occurred while President Duterte is at his home in this city.

Authorities still have to establish if the explosion was caused by an improvised explosive device or by a liquefied petroleum gas tank.

Witnesses said they heard a loud explosion and saw smoke. A masseuse said the blast appeared to have come from a chair.

The Davao Police Regional Office chief said up to 12 people might have been killed in the blast.

The wounded were rushed to different hospitals, with many brought to the Southern Philippines Medical Center.

The ADDU advised students inside the campus to stay calm as it assured them of their safety.

“The ground floor of the community center is currently serving as the clinic. Students and victims may seek first aid help there,” ADDU said in its official Twitter account.

“It is highly advisable to stay indoors, and avoid going to crowded public spaces such as malls and parks to be safe,” it added.

The blast occurred following President Duterte’s order to the military to crush the Abu Sayyaf.

On March 4, 2003, a bomb exploded at a waiting shed at the Davao International Airport, killing 21 people and leaving about 145 people wounded. A month later on April 3, the city’s Sasa Wharf was also bombed, leaving 17 dead and 56 wounded.

The Abu Sayyaf claimed responsibility for the airport attack. Several members of the Abu Sayyaf and the Moro Islamic Liberation Front were later apprehended in connection with the bombings.

Hours after the wharf bombing, three mosques in the city were bombed by masked men.  – With Janvic Mateo