Chicago is bracing for its biggest snow since 2015 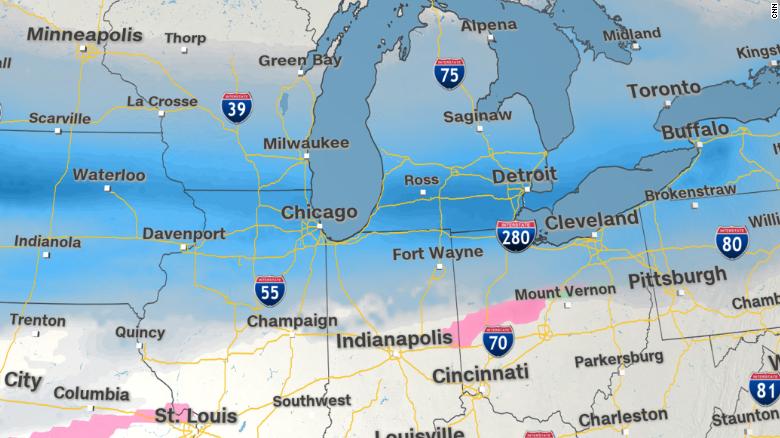 (CNN)Chicago commuters, there’s no other way to put this: Your drive Friday is going to be a bear.

A narrow band of very heavy snow will hit the United States’ third largest city by population beginning Thursday night. Schools will be closed as millions see accumulations of 8 to 14 inches by late Friday.
“Travel will be very difficult to impossible at times, including during the morning commute,” the National Weather Service said in a winter storm warning.
The snow will linger into Saturday, and a lighter round is likely Sunday. 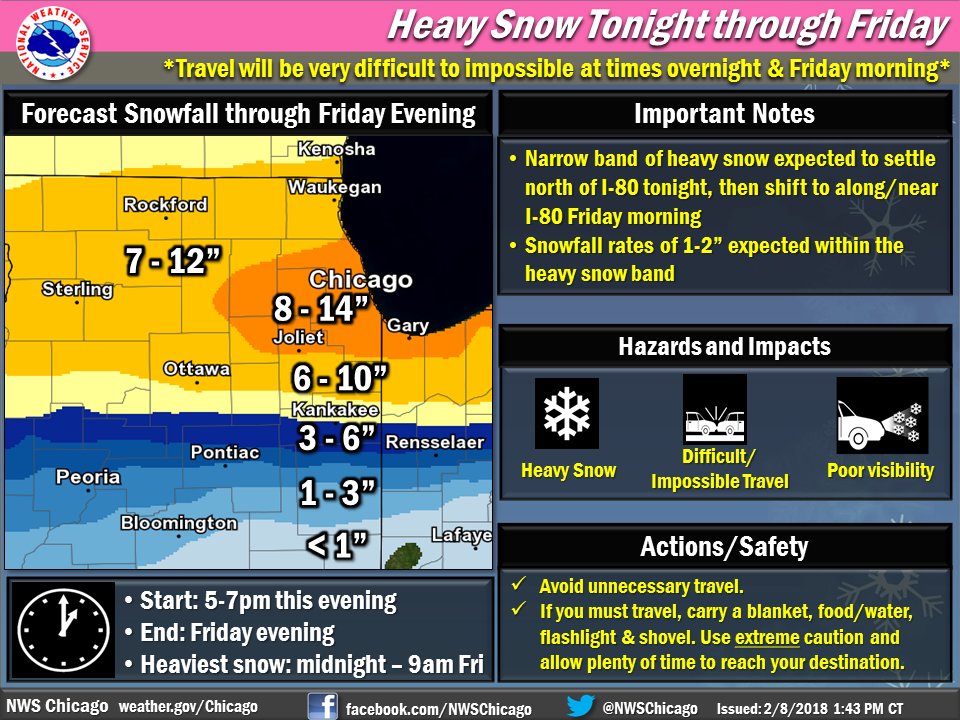 Heavy snow is expected to spread across northern Illinois early this evening, then continue into Friday. Travel tonight into Friday will likely be very difficult to impossible at times. Avoid any unnecessary travel.

Detroit will get a snow dump of its own: The forecast is for 6 to 9 inches. It, too, has closed its schools.
Chicago officials say they are ready. Trucks, plows and tons of salt are in position, they said at a Thursday afternoon news conference.
“Make no mistake about it: This is a heavy snow, heavier than we have seen in a number of winters,” said Mayor Rahm Emanuel. “Now, Chicago is used to this. On the other hand, over the last winters we haven’t had a snow at this level. And it is not just one night, it is going to go through the weekend.”
Chicagoans are a hardy bunch, but a foot of snow is still a big deal. From 1884 to 2018, Chicago has had only nine days with 12-plus inches of snow.
Residents weathered 20 inches over two days in February 2011. A storm in February 2015, logging in at 16.2 inches, was the last time Chicago had more than 10 inches of snow in a single storm.
Chicago and Detroit flight cancellations for Friday were on the way up, according to tracking website flightaware.com. By Thursday evening, more than 600 flights were canceled to and from the two cities.

As snowmageddon approaches tonight here are a few things we are doing to make it easier for you: Putting extra patrols on the freeways and in our townships. Our administrative troopers will be out there as well. Towing cars left on the freeway for MDOT to clear roads safely. pic.twitter.com/5CnN7kX11V

Have an emergency kit in your car. We will get to you but it may take time. We are driving in the same conditions. Don’t call 911 for road conditions. Look out your window. It’s snowing. Finally, please don’t hit us. Move over or slow down when you see our lights!

To the east, snow emergencies have been declared in many metro Detroit communities, according to CNN affiliate WDIV. Michigan State Police said “snowmageddon” was approaching.
“Please remember with all of the school closings that there will be lots of kids playing in the snow and they may not be watching! Drive carefully!” the agency tweeted.

I first heard of this case in Chicago Illinois of a Chicago police officer shooting a young man 16 times in October of 2014 about two days ago. Even before I watched the video this evening of the police cruiser dash cam of this horrific crime I was sickened by the news of any person or even an animal being shot 16 times by one person. There is and was no necessity for such an event to have ever happened to this young man or to anyone. Many people want to make this and every police shooting by a non-black officer of a black person into a race issue, and that is sickening racism itself. In my opinion this shooting looks like a case of first degree murder and it appears that the Cook County District Attorney agrees as the now former officer has finally been charged with first degree murder for executing this young man. Is this former officer a racist person, does he hate black people? I don’t know the man personally, he maybe, or maybe not. I personally believe that the biggest issue here and in many police departments across the nation isn’t police racism near as much as it is the arrogance that ‘the law’ through moral-less District Attorneys have fostered throughout that profession during at least the past fifty or so odd years.

Throughout the past thirty years or so I have seen several videos of police officers shooting unarmed people in the back as they were running away from the officers and the local D.A.’s refusing to charge the officers. These were videos that were put on television programs, it is not like I have some secret information that the general public doesn’t have. I remember seeing film of a white male who was pulled over, the driver waited for a moment, flipped his cigarette out his window and sped off. After a short chase the suspect got out of his car and started running away, the officer got out of his car and shot the young man in the back killing him. The D.A. called it a justified killing because the young man had put officers in harm’s way via the chase. Excuse me but that is murder, cold-blooded murder, and it didn’t have anything to do with race. This is an issue of arrogance and aloofness that has become a major problem in that profession.

There have been several video’s of people who were shot and killed by officers when they decided to drive away from the scene with an officer standing near the vehicle. The officers said they were afraid for there lives as they considered the vehicle a deadly weapon (which we all know it definitely can be). This is obviously a judgement call but if you are standing near a car and the driver is trying to get away from you in most cases all you have to do is step out of the way, if anything just shoot at the tires, remember, in these cases the cars were at zero miles per hour when the conflict started. I could see shooting at the driver if by chance you (the officer) were directly in front or directly in back of the vehicle and the driver mashes the gas pedal and comes after you but it is murder when the driver is just trying to get away from you by going in a different direction than you. Most of these that I have seen throughout the years had nothing to do with race as both people had the same skin color.

I have personally seen several times throughout the years where officers were beating on people and the person would raise their hands trying to block the blows to their head and body while the officers were screaming at them to quit “resisting’ them. I have also seen where in these same situations that the arrested person was then also charged with assaulting a police officer because they were trying to not get their head beaten in. This post is not a condemnation of all police officers as there are many very good moral people wearing that badge but this profession absolutely must clean out the ego maniacs and the punks from their own ranks, top to bottom if they want to have the general public trust them more than they are trusted now. These are not race issues, are some officers racist though? My experience to that question is of course some are. Do you honestly believe that there is any large profession that doesn’t have some racist employees in the ranks? But does that mean that all of their profession is racist? If you do, if you are looking for a racist, there is a very good chance that all you have to do to find a racist person is to look in your own mirror. I do believe that many of these people who are within this ‘black lives matter’ movement as well as some of these black “Reverends” who run to a camera every time a non-black cop kills a black person needs to take a long look in their own mirror, and their own souls. Everything in this world is not about race or even economics. Sometimes it is a case of arrogance and ego along with no basic morals behind the Badge and in this case in Chicago appears to be the real issue, not race.