Weather tracking website Skymetweather.com has observed that the system may strengthen as a tropical storm on the evening of April 27 or on the morning of April 28. The Indian Meteorological Department has said if the low pressure transforms into a cyclone, it will move in a western and north-westerly direction where Tamil Nadu lies.(PTI PHOTO)

The Indian Meteorological Department on Thursday issued a red alert for Tamil Nadu and Puducherry on April 30 and May 1 saying heavy to very heavy rainfall is likely in the southern state and the union territory. The IMD and other private weather forecasters have predicted that a low pressure formed in the Bay of Bengal is likely to develop into a cyclone which would be named ‘Fani’.

According to the IMD, if the low pressure transforms into a cyclone, it will move in a western and north-westerly direction where Tamil Nadu lies.

IMD’s Chennai regional director, S Balachandran said, “We are monitoring the system. Only on April 27 can we predict when and where the cyclone will make landfall.”

He also advised fishermen not to venture into the sea for the next week.

Though the IMD has not predicted the exact place where Cyclone Fani would make landfall, Nagapattinam-based private weather analyst Selva Kumar, who had correctly predicted that Cyclone Gaja will cross the shores between Nagapattinam and Vedaranyam coasts in November last, has claimed that Cyclone Fani will cross the shore between Manamelkudi (Pudukottai district) and Adhirampattinam (Thanjavur district) coastal areas.

The weather tracking website Skymetweather.com has observed that the system may strengthen as a tropical storm on the evening of April 27 or on the morning of April 28.

“It is to be named Cyclone Fani. By this time, it would have reached Southwest Bay of Bengal, close to Sri Lanka. Gradually, it will arrive in close proximity of the North Tamil Nadu coast in the Southwest Bay of Bengal. Weather models are showing the tendency of the system to move north-northwestwards and re-curve thereafter,” the skymetweather.com said in its blog.

The weather forecast website has also predicted that it is already a slow-moving system. “If the system re-curves, it is likely to further make it slower. This means that the system may become more intense and spend more time in the proximity of the Tamil Nadu coast, resulting in good rains over the state, including Chennai for a prolonged period,” the prediction reads.

If the cyclone makes landfall, it will be the second one in the state within six months. Cyclone Gaja hit the state in November. In the cyclonic devastation, 63 people died and thousands of houses were damaged in Nagapattinam, Thanjavur, Thiruvarur and Pudukkottai districts.

With the IMD sending out a red alert, district administrations of Pudukkottai, Thanjavur, Nagapattinam, Cuddalore and Thiruvarur have advised fishermen not to venture into the sea for the next few days.

During her visit, Sitharaman will also be charting out the course for the first ever India-US tri-service military exercise in Bay of Bengal in May-June, 2019. Nirmala Sitharaman will be visiting the US Indo-Pacific Command in Hawaii to review military-to-military relations and chart out the course for the first ever India-US tri-service military exercise in Bay of Bengal in May-June, 2019. (Sonu Mehta/HT PHOTO)

Days after the apex Japan-India-America (JAI) trilateral meeting on Indo-Pacific on the sidelines of the G-20 summit in Buenos Aires, defence minister Nirmala Sitharaman will be visiting the US Indo-Pacific Command in Hawaii to review military-to-military relations and chart the course for the first ever India-US tri-service military exercise off in Bay of Bengal in May-June, 2019. Defence minister Sitharaman left for Washington on Saturday night.

According to Indian and US diplomats familiar with the agenda of her visit, Sitharaman will be meeting her US counterpart James Mattis on December 3 to follow-up on the trilateral meeting between Prime Minister Narendra Modi, President Donald Trump and Japanese Premier Shinzo Abe and prepare grounds for sharing of information in the Indo-Pacific theatre through the secure COMCASA network. India recently signed a deal allowing it to become part of this network. With Japan, the US, Australia, and India all flying the P-8I anti-submarine surveillance aircraft, the Indo-Pacific theatre has become transparent for the QUAD grouping (of which these four countries are part) also as military information can now be exchanged through the secure network. This new network will be put to test during the tri-service amphibious exercise off the Indian seaboard next summer with all elements of Indo-Pacific command participating with their respective Indian military elements.

Senior government officials told Hindustan Times that Sitharaman will be interacting with key defence officials, thinkers and strategists on the west coast where she will be meeting a select group at Stanford university with former US National Security Advisor H R McMaster being the host. US Defence Secretary Mattis is also part of this network. She will also be visiting the highly rated Defence Innovation Unit (DIUx) in California in a bid to link Indian defence startups with this unit which aims to explore synergies between innovative US private sector firms and the Pentagon on latest technologies.

This will be largely funded by venture capital with Indian government providing the seed money. The main idea behind visiting DIUx is to understand the potential of constant technological upgrades achieved through research by private sector.

Sitharaman will be hosted by Admiral Phillip S Davidson, the top commander of all US armed forces in Indo-Pacific at Hawaii on December 6. The Minister’s visit to Hawaii is to recognize the American

During her meeting with Secretary Mattis at Pentagon, Sitharaman will also be exploring the acquisition of high-end military technologies for India such as the Predator-B hunter killer drone and reviewing the joint working groups on aircraft carriers and aircraft engines.

END_OF_DOCUMENT_TOKEN_TO_BE_REPLACED

The cyclone, dubbed Mora, made landfall early Tuesday morning between the cities of Chittagong and Cox’s Bazar and is heading north, authorities in the capital Dhaka said.
“More people were still waiting for evacuation,” said Abu Syed Mohammad Hashim, acting director general of the department. Authorities have also shut airports and ports in the regions expected to be worst hit.
Khalid Mahmood, a director at Disaster Management Department, told CNN that no major casualties had been reported yet.
Residents were seeking shelter in schools and other safe buildings in 17 coastal districts, Hashim said. Officials have organized 3,800 relief centers ahead of the storm.
Medical teams have been formed and doctors and nurses have had their leave requests canceled in anticipation of the storm’s landfall, according to Bangladeshi state media. Hashim told the state-run news agency BSS that rescue teams comprised of members of the armed forces and other agencies were also on standby.
With about 700 kilometers of coastline, Bangladesh is exposed to cyclones and is often battered by deadly storms. Seven of the top ten deadliest storms in recorded history have occurred in either Bangladesh or Myanmar, according to CNN meteorologist Pedram Javaheri.
“A combination of its lengthy and exposed coastline, inadequate infrastructure and plenty of fuel in the way of warm Bay of Bengal waters play a role in making this region the deadliest in the world as it relates to tropical cyclones,” Javaheri said.
At the southern end of the Bay of Bengal, Sri Lanka has been experiencing heavy monsoon rains and severe flooding, which have left at least 160 people dead and dozens more missing. The two weather systems, however, are unrelated. 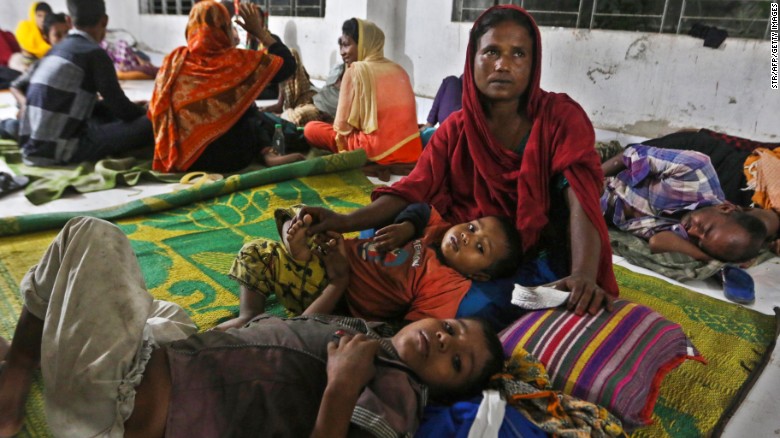 Nearly 300,000 people were evacuated as Cyclone Mora barrelled towards Bangladesh’s southeastern coast at speeds of more than 85 kilometres (53 miles) per hour, officials said.

Mora is the equivalent of a strong tropical storm and will bring winds around 100 kilometers per hour as it moves onshore, said CNN meteorologist Taylor Ward. A more significant problem than the winds will be the potential for flooding — from storm surge and heavy rainfall, he said.
“The coastline of Bangladesh is very low-lying and is prone to storm surge problems,” Ward said. “Additionally, tropical cyclones in the region bring extremely heavy rainfall which often turns deadly in the densely populated areas.”
In May 2016, Cyclone Roanu made landfall in Bangladesh with similar speed winds causing the deaths of at least two dozen people.
Some low-lying areas of Cox’s Bazar are already underwater due to an unusually high tide, state media reports.
The country’s two main seaports in Chittagong and Mongla have suspended container handling, and river transports across Bangladesh have been suspended. Chittagong and Cox’s Bazar have been advised to hoist the number 10 warning signal — the highest level — and other areas the lesser number eight signal.
The airports of Chittagong and Cox’s Bazar have also been closed; Cox’s Bazar indefinitely and Chittagong’s Shah Amanat International Airport until at least 2 p.m. local time (4 a.m. ET) Tuesday.
“We will reopen the airport if weather permits after 2 p.m. tomorrow… the suspension period will linger if the brunt of cyclone badly affects our airport infrastructure,” CAAB flight safety director Ziaul Kabir was quoted as saying.