(THIS ARTICLE IS COURTESY OF THE CIA FACT BOOK) 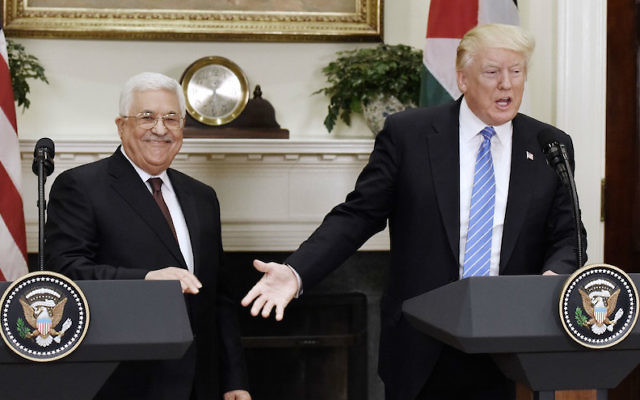 US President Donald Trump (right) giving a joint statement with Palestinian Authority President Mahmoud Abbas in the Roosevelt Room of the White House, May 3, 2017. (Olivier Douliery-Pool/Getty Images via JTA)

The US administration’s yet-to-be-announced Middle East peace plan calls for maintaining the status quo between Israel and the Palestinians, while giving the Palestinians “eternal self-rule,” Palestine Liberation Organization Secretary General Saeb Erekat said in a policy paper he presented to Fatah leaders on Friday.

The plan will effectively “lead to the creation of one state with two systems, thus legitimizing apartheid and settlements in accordance with American criterion,” Erekat wrote in his report, titled “Dictations of President [Donald] Trump for the new phase: imposing a solution, June 2017 – March 2018.” 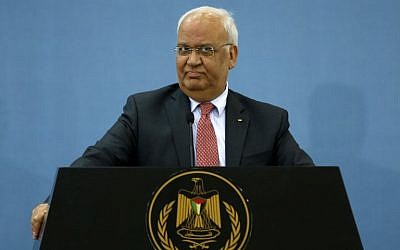 Saeb Erekat, secretary general of the Palestine Liberation Organization, speaks to journalists during a press conference after meeting with diplomats and foreign dignitaries, in the West Bank city of Ramallah on February 28, 2018. (AFP PHOTO / ABBAS MOMANI)

Erekat’s document was presented to members of the Fatah Revolutionary Council on the second day of their three-day conference in Ramallah, which began on Thursday.

Erekat did not say how he had obtained the details of the plan, which the US has said has not been finalized.

“We must not wait until the outlines and content of this liquidation and dictation plan are announced,” Erekat cautioned.

“According to this new American phase, anyone who wants peace must agree to what the US dictates, and anyone who opposes the plan will be considered as being part of the forces of terrorism and extremism, which should be fought against and expelled. For the US, moderation means accepting dictation that fully endorse the positions of successive Israeli governments.”

In his policy paper, Erekat detailed the “outlines” of the purported peace plan, which he described as “a new American phase of imposing solutions and dictations.”

According to the senior Palestinian official, the main points of Trump’s plan include:

— Recognition of Jerusalem as Israel’s capital and moving the US embassy to the city. (This, according to Erekat, would mean accepting the annexation of East Jerusalem to Israel.)

— The Trump administration would “invent” a capital for a Palestinian state in the suburbs of Jerusalem (outside the current municipal boundaries of the city).

— The Trump administration would announce within a period of two-three months its recognition of the annexation of settlement blocs. Trump, according to the report, is proposing the annexation of 10 percent of the West Bank, while Prime Minister Binjamin Netanyahu wants to annex 15%.

— The Trump administration would then announce a joint security concept for Israel and the Palestinian state as peace partners. The concept would include the establishment of a demilitarized Palestinian state with a strong police force; bilateral, regional and international security collaboration with the participation of Jordan, Egypt and the US, while leaving the door open for other countries to join in; the presence of Israeli forces along the Jordan River and “central hills” in the West Bank to protect the two states; and giving Israel overriding security responsibility for emergency cases.

— The world would recognize Israel as the homeland of the Jewish people.

— Israel would guarantee freedom of worship to all religious sites by maintaining the status quo.

— Parts of the Ashdod and Haifa ports and Ben Gurion Airport would be allocated for Palestinian use, while security responsibility would remain in the hands of Israel.

— Palestinians would have presence at international border crossings, while overriding security responsibility will remain in Israel’s hands.

— Territorial waters, airspace and electromagnetic waves will remain under Israeli control, without prejudicing the needs of the Palestinian state.

— A safe passageway would be opened between the West Bank and Gaza Strip under Israeli sovereignty.

— A just solution would be found for the issue of the refugees in the context of the future Palestinian state.

“These are the outlines of the historic deal that the US administration will seek to impose on the Palestinians,” Erekat said in his report.

The Israelis and Palestinians will negotiate final borders and final status issues at a later stage within the framework of an agreed timetable, he added.

Earlier this week, the White House said its peace plan was not yet finished and that “nobody knows what it is.”

A senior Trump administration official told The Times of Israel: “There is constant speculation and guessing about what we are working on.”

The official was responding to a report in the London-based pan Arab newspaper Asharq al-Awsat that claimed that the Trump peace plan would include recognition of a Palestinian state with its capital in East Jerusalem.

White House spokesman Josh Raffel accused those behind the newspaper report, which cited Arab diplomatic sources in Paris, of trying to sway critics against the administration.

“It is unfortunate that some parties are seeking to prejudice people against our unfinished plan, which these sources have not seen,” he said.