The Struggle of Wills Between Revolution, Regime Reshapes Iraq Demonstrators gather at a protest during a curfew, three days after the nationwide anti-government protests turned violent, in Baghdad, Iraq October 4, 2019. REUTERS/Alaa al-Marjani
Baghdad- Fadhel al-Nashmi
Iraq today has to decide between one of two choices: either answering to the protesters’ demands and overthrowing the post-2003 regime or reforming the current regime. The latter is what the vast majority of parties in power want. This either/or binary, though often dreadful in politics, is precisely the case in Iraq today.

The protesters are putting forward specific demands that they are not willing to compromise. Most notably, they insist on replacing Adil Abdul-Mahdi’s government with a government that will hold those responsible for the murder of hundreds of protesters accountable, draft new electoral legislation, and form an independent electoral commission. The protesters want these steps to be taken in coordination with the parliament that will then resign to allow for early elections under international monitoring.

The protesters have already achieved their first demand. They have overthrown Abdul-Mahdi’s government, an indication that the regime is aware that it needs to compromise by scapegoating specific figures to satisfy the protesters.

The regime insists on finishing the remaining three years of its term, even if with a new Prime Minister, because of their fear that criticism of their notorious ties with Iran will prevent them from securing the 50 seats they need in the next elections. The Kurds are no longer heavily invested in Barham Saleh, with their interest in him restricted to demands that he secures budget that allows the nearly autonomous region to remain sustainable, protects minorities, and safeguards against the return of dictatorship.

This is similar to the young Sunni position highlighted in the May 2018 elections led by Mohamed al-Halbousi in that it insists on finishing its term to consecrate the new rule, while definitively excluding the old leaderships.

After Muqtada al-Sadr’s Saeron alliance withdrew their candidacy two days ago, the regime is in a better position to insist on finishing its term, and while doing so, propping up several obstacles and dragging the selection of a new prime minister for months. This will potentially spread despair among the protesters. It seems that Saeron withdrawing their candidacy was a pragmatic decision to save face with the revolution. A source from the alliance stated that it would go against their interests in front of their supporters and the protesters, in general, to get involved in this.

Besides, the alliance thinks that their competitors want to incriminate them in this vicious cycle of finding a new prime minister in order to reign in on whatever is left of Saeron’s popular support. Generally, no one side can be declared victorious yet. Still, the revolutionary forces are insisting on their demands and on crushing whoever stands against them. Whatever the outcome, the country is standing at the doorstep of radical change, and the scene after October will look nothing like it did before.

Demonstrators are protesting against dire economic conditions in the heavily indebted country.

Tens of thousands of demonstrators have gathered in Lebanon‘s streets on Sunday for a fourth day of anti-government protests that have led to the resignation of a Christian party from the government.

Demonstrators, who have been on the streets since Thursday, have pledged to continue marching despite the resignations late on Saturday of four government members from the key political party, Lebanese Forces.

Labour Minister Camille Abousleiman, one of the four to quit the government, told Al Jazeera shortly after the decision that they had “lost faith in the government’s ability to effect change and address the problem”.

Lebanese citizens have been suffering from tax hikes and dire economic conditions in the heavily indebted country.

Lebanon’s public debt stands at around $86 bn – more than 150 percent of gross domestic product, according to the finance ministry.

The grievances and anger at the government’s lack of solutions erupted into protests on Thursday, sparked by hikes in taxes including a proposed $0.2 tax on calls via messaging apps such as WhatsApp.

Such calls are the main method of communication for many Lebanese and, despite the government’s swift abandonment of the tax, the demonstrations quickly swelled into the largest in years.

“It is day four and protesters are back on the street. It’s not just in the capital Beirut, but across the country. The message they [protesters] are giving is of defiance and that they will continue to demand the resignation of the government,” said Al Jazeera’s Zeina Khodr, reporting from Beirut.

“While there are tens of thousands on the street protesting, there are still people who are backing the political parties, so it is not going to be easy to bring a change. These people out there want a nationalist leader whose loyalty is to Lebanon and not a political party.”

In an attempt to appease demonstrators, Lebanon’s finance minister, following a meeting with Prime Minister Saad Hariri, announced that they had agreed on a final budget that did not include any additional taxes or fees.

“We want everybody to join us on Sunday and also Monday to topple the government,” one protester said.

On Friday, Hariri gave a 72-hour deadline to his partners in government to agree on a solution to the country’s economic woes without imposing new taxes.

Hezbollah chief Hassan Nasrallah, whose movement is part of the government, warned on Saturday that a change in government would only worsen the situation.

The army on Saturday called on protesters to “express themselves peacefully without harming public and private property”.

On Saturday evening, thousands were packed for a third straight night into the Riyadh al-Solh square in central Beirut, despite security forces having used tear gas and water cannon to disperse similar crowds a day before.

Amnesty International said the security forces’ reaction was excessive, pointing out that the vast majority of protesters were peaceful.

“The intention was clearly to prevent protesters gathering – in a clear violation of the right to peaceful assembly,” it said.

Small groups of protesters have also damaged shop fronts and blocked roads by burning tyres and other obstacles.

The Internal Security Forces said 70 arrests were made on Friday on accusations of theft and arson.

But all of those held at the main police barracks were released on Saturday, the National News Agency (NNA) said. 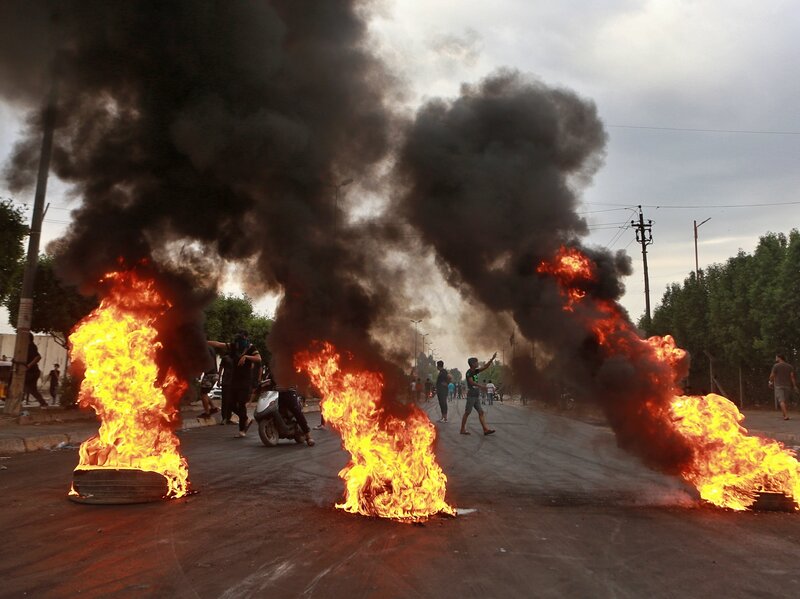 Anti-government protesters set fires and close a street during a demonstration in Baghdad on Sunday after nearly a week of unrest throughout Iraq.

Iraqi authorities say at least seven more people were killed in clashes between protesters and police in eastern Baghdad on Sunday, bringing the death toll from nearly a week of anti-government rallies throughout Iraq to more than 100 with thousands of others injured.

Protesters, who took to the streets on Tuesday frustrated over joblessness and corruption, have been met with live ammunition from security forces attempting to break up the mass demonstrations that have convulsed Baghdad and parts of southern Iraq for days.

So far, 104 people have been killed and 6,107 have been wounded in the unrest, according to figures released by Iraqi security officials. More than 1,200 security members are among the injured.

Then the protesters put out a call to re-converge on social media and the response took observers and government officials aback: Thousands of mostly young adults in their 20s, outraged over inadequate services and poor job prospects in the oil-rich country, came out to push for more opportunity and an end to corruption.

The Iraqi army and police have responded by firing live rounds, tear gas and rubber bullets into crowds. As protests spread to other parts of the country, the bloody clashes continued.

The six days of street demonstrations mark the most serious challenge Prime Minister Adel Abdul-Mahdi has faced since he assumed office last October. He has committed to meeting with protesters without armed forces to have a dialogue about their demands.

“I will go and meet them without weapons and sit with them for hours to listen to their demands,” Abdul-Mahdi said on Saturday in remarks on state television. 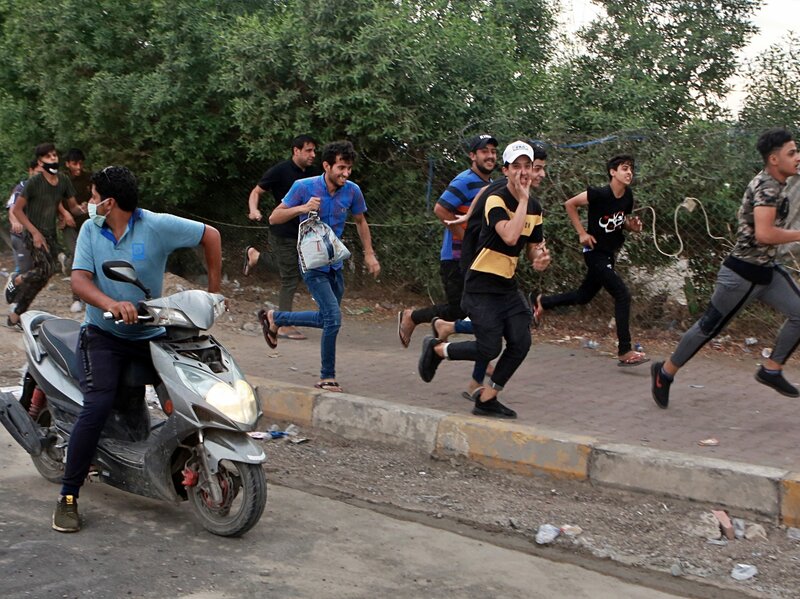 Anti-government protesters run for cover while Iraqi security forces fire live ammunition in the air during a demonstration in Baghdad on Sunday.

Abdul-Mahdi announced a plan to pay out unemployment assistance and provide government-backed housing for low-income residents in an attempt to satisfy the demonstrators who have set buildings aflame and sparred with authorities.

The United Nations envoy for Iraq, Jeanine Hennis-Plasschaert, took to Twitter on Saturday to denounce the violence, saying: “This must stop.”

“I call on all parties to pause and reflect. Those responsible for violence should be held to account. Let the spirit of unity prevail across Iraq,” wrote Hennis-Plasschaert.

Protesters called for top government officials to step down, as authorities cut of Internet service in Baghdad and across much of the country.

Demonstrators on Sunday also called for Iran to stop meddling in Iraqi politics.

Amid growing unrest, Marta Hurtado, a spokeswoman for the United Nations high commissioner for human rights, urged the Iraqi government to allow citizens to peacefully assembly and exercise their rights to freedom of expression without fear of a violent crackdown.

“The use of force should be exceptional, and assemblies should ordinarily be managed without resort to force,” Hurtado said in a statement.

All incidents in which security forces killed or injured protesters should be promptly and transparently investigated by the government, Hurtado said.

Hurtado also said reports that three journalists covering the protests were detained and the government cutting off Internet service were alarming and should be examined.

“Blanket internet shutdowns are likely to contravene freedom of expression, unduly restricting the right to receive and impart information and may exacerbate tensions,” she said.