Authorities impose curfew and cut internet access in many cities as death toll from three days of mass protests hits 20.

The death toll from three days of mass anti-government protests in Iraq has risen to 20, with hundreds more wounded as authorities imposed curfew in several cities and cut internet access across much of the country to quell unrest.

The protests, which began in the capital, Baghdad, on Tuesday, are mostly spontaneous and without political leadership, staged by disenchanted youth demanding jobs, improved services, such as electricity and water, and an end to Iraq’s endemic corruption.

The demonstrations have since spread to cities across the mainly Shia south, making it the most serious challenge to Prime Minister Adel Abdul Mahdi’s year-old government.

In Baghdad, authorities imposed a round-the-clock curfew early on Thursday, saying the measure was meant to “protect general peace” and protesters from “infiltrators” who committed attacks against security forces and public property.

But dozens of protesters defied the order early on Thursday and attempted to gather at the Tahrir Square, prompting security forces to use live rounds and tear gas to disperse the crowds.

“We slept here so the police don’t take the place,” one demonstrator told AFP news agency before riot police fired into the air. 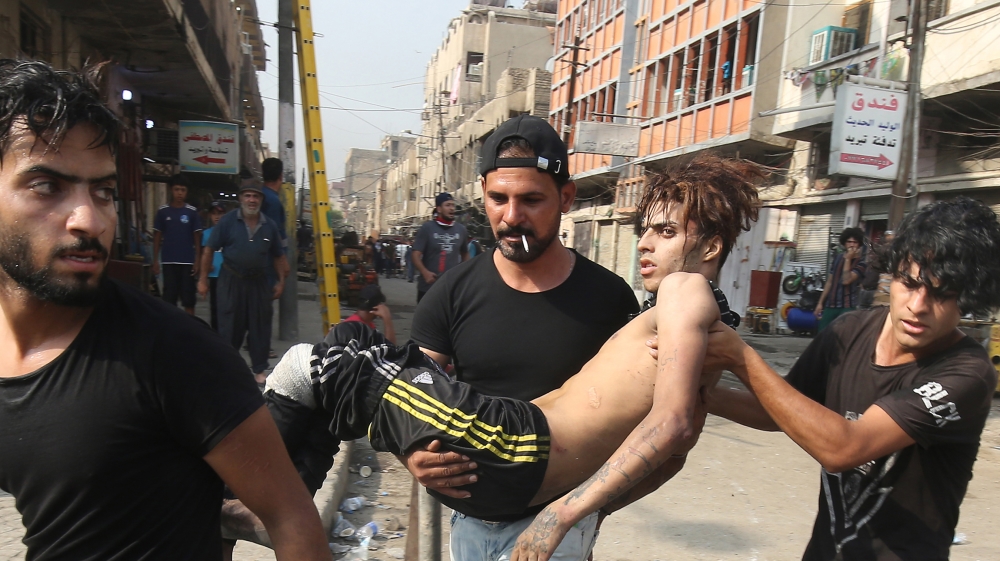 Early on Thursday, some cars and civilians were seen in the capital’s streets. Al Jazeera’s Imran Khan, reporting from the capital, said there was an “eerie quiet over Baghdad” but “sporadic gunfire towards Tahrir Square” could be heard.

“The curfew does seem to be working,” he said. “The protesters have been trying to gather in different areas of Baghdad throughout the day, but every time they reach crowds of 50 to 60 people, the security forces disperse them. The government hasn’t indicated when the curfew will be lifted.”

Authorities said travellers to and from Baghdad airport, ambulances, government employees in hospitals, electricity and water departments, and pilgrims were exempt from the restrictions.

Curfew was also imposed in the holy city of Najaf and the southern city of Nasiriya, the site of the deadliest protests so far with a total of 10 people, including one police officer, killed. In the city of Amarah, medics and security forces have confirmed the killing of four protesters on Thursday, bringing the death toll over the past three days to 20.

More than 1,000 others have been wounded in the nationwide protests, while 62 people have been arrested, according to figures from Iraq’s Human Rights Commission.

Residents are wary that more protests could erupt after powerful Shia leader Muqtada al-Sadr called for “a general strike”. His political bloc, Sairoon, which came first in last May’s parliamentary elections, is part of the ruling coalition. 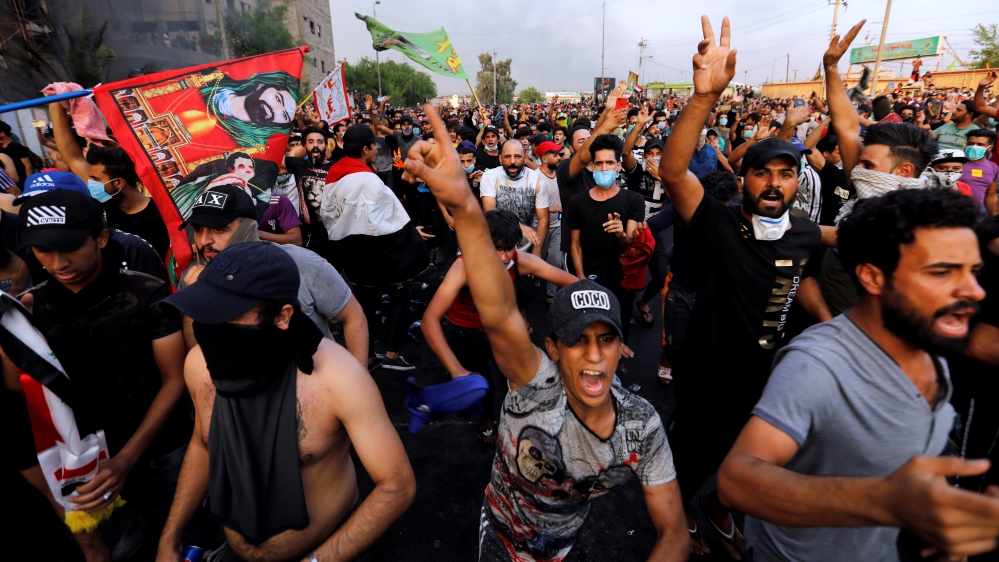 Demonstrators at a protest rally over unemployment, corruption and poor public services in Baghdad [Thaier al-Sudani/Reuters]

Anger over high rates of youth unemployment – which is approximately 25 percent, or double the adult rate, according to the World Bank – appears to have set off the latest round of demonstrations.

“We want jobs and better public services. We’ve been demanding them for years and the government has never responded,” said Abdallah Walid, a 27-year-old protester.

The protesters are mostly “angry young people who are not aligned to any political or religious party”, said Al Jazeera’s Khan. “They are simply very frustrated at the fact that they don’t have jobs.”

After a small protest was quickly dispersed by security forces on Tuesday, a social media call went out which resulted in thousands of people taking to the streets, he added. Since then, the protests have spread to other cities in the country’s south.

Meanwhile, two border crossings into Iraq – including one widely used by Iranian pilgrims – have been closed because of unrest in Iraq, Iranian border guards said. 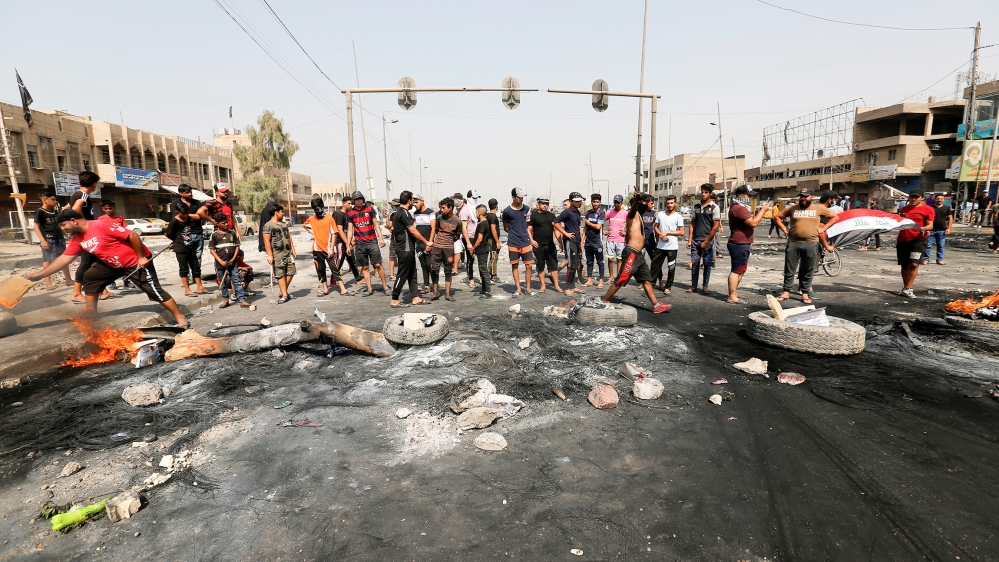 According to Iran’s semi-official news agency Mehr, Iranian border guards commander General Qasem Rezaei said the Khosravi and Chazabeh crossings had been closed since late Wednesday but other crossings were open in the run-up to an annual Shia Muslim pilgrimage in Iraq.

The tension has been exacerbated by a near-total internet shutdown, the closure of government offices and at least one overnight explosion that hit the Green Zone, where some ministries and embassies are located.

A security source in the area told AFP there were two blasts, likely caused by indirect fire a little over a week after two rockets hit near the US embassy there. 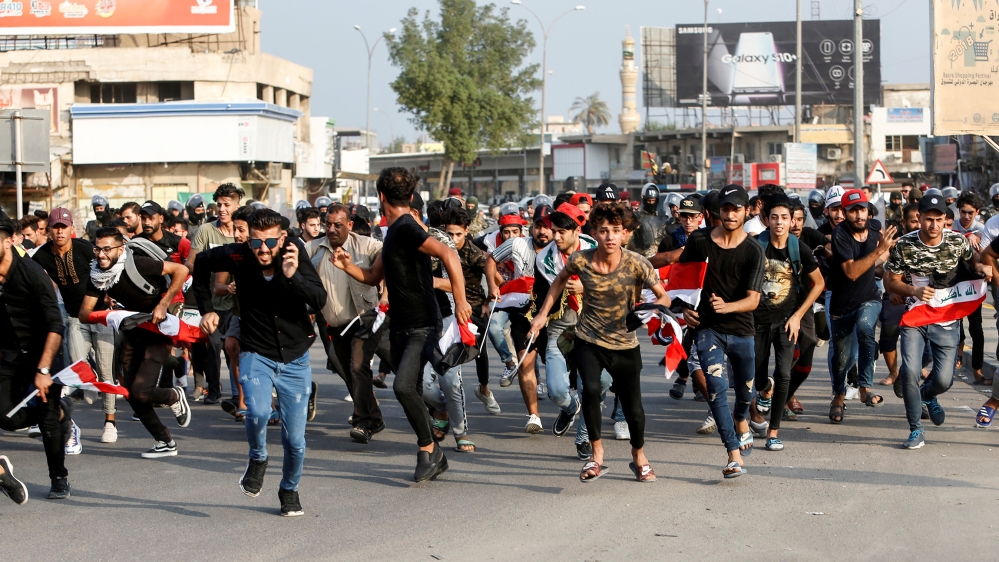 Demonstrators run as they take part in a protest rally over unemployment, corruption and poor public services, in Basra [Essam al-Sudani/Reuters]

The Green Zone had been inaccessible for most Iraqis since the 2003 US-led invasion of Iraq but had reopened to the public in June.

It has often been the focal point for public anger, including in 2016 when al-Sadr’s supporters stormed it and paralysed state institutions. 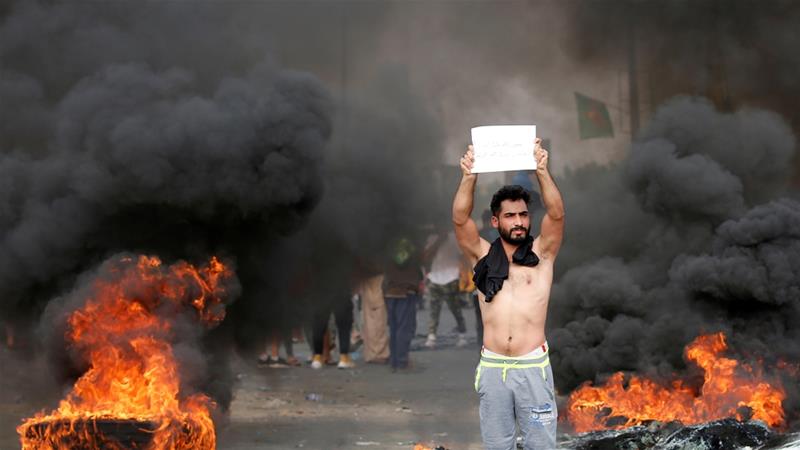 Why are Iraqis protesting against the government?