We live in a great era for travel, equipped with phones that can guide us through far away countries and abundant, affordable airfare. As our world changes, the planet’s big cities get even more exciting and accessible, becoming better vacation destinations every year. Here are the seven most visited cities of the last decade. 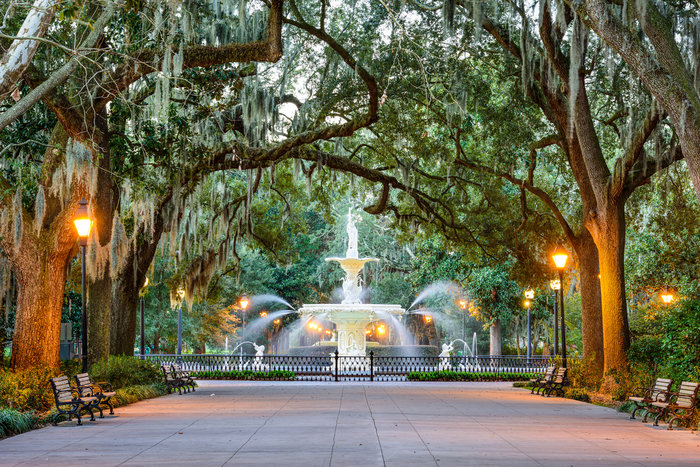 Test your knowledge!
What is this city that famously features Spanish moss?

The Big Apple is the most-visited city in America and in the entire Western Hemisphere. A haven for culture, art, fashion, and food, New York City is a destination for travelers from around the world and from within the United States.

A visit to New York could include a wide variety of activities, from visiting world-famous art galleries such as the MOMA and the Guggenheim to a stroll through Central Park or around Times Square. Nicknamed “the city that never sleeps,” New York offers a different adventure to everyone.

The capital of Malaysia is the first of many Asian cities in the top seven most-visited cities of the decade. Despite being the sixth-most-visited city in the world, Kuala Lumpur is still considered something of a hidden gem for vacationers.

In Kuala Lumpur you can visit architectural wonders such as the Petronas Towers, the tallest twin towers in the world, or take in a panoramic view of the city from the top of the Menara Kuala Lumpur. You can also see wildlife up close at the Bukit Nanas Forest Reserve or the Aquaria KLCC.

Considered one of the safest destinations for tourists in Asia, the island city-state of Singapore is the fifth-most-visited city in the world. Singapore is a very wealthy city, and you can see it in the impressive public works projects that are reinventing this center of futurism. Take a stroll through Gardens by the Bay to see some of the most beautiful arrangements of natural fauna, lights, and architecture that can be found anywhere in the world.

Another modern city with iconic buildings and one that has seen many public improvements completed over the last 10 years, Dubai is the world’s fourth-most-visited city.

In Dubai you can find some of the wonders of the architectural world, such as the Burj Khalifa, the tallest building in the world. It is also home to some of the best theme parks, with attractions featuring Disney and Marvel characters. Currently under construction is what will be the largest water park in the world when it opens in 2020.

In constant competition for the number-two spot of most visited places for a given time period are London and Paris. And while London received a boost from hosting the Olympics early in the decade, Paris managed to surpass it in the end, making London the third-most-visited city of the decade.

As a center of western civilization, London has tons of things to take in on a visit. You can see some of the most iconic structures in the world, such as the Big Ben clock tower or the Tower Bridge. You can also explore history at the British Museum, which has one of the best collections of ancient artifacts in the world.

As one of the most prized vacation destinations on the planet, Paris secures the number two spot on the list of most-visited cities in the last 10 years.

World famous attractions such as the Eiffel Tower and the Louvre, which holds some of the most important art ever created, draws millions of visitors to the French capital every year. In addition to a world-renowned culinary scene and vibrant nightlife, there is something for everyone to enjoy in the City of Lights.

The most-visited city of the 2010s is Bangkok. The capital of Thailand draws almost 2 million more visitors per year than Paris, receiving a boon from the large number of Chinese travelers who flock to it.

The city has many opulent shrines and ancient temples that you can explore. It also has a vibrant nightlife and is the entry point for the dense Thai jungle, a popular vacation destination.

(THIS ARTICLE IS COURTESY OF THE USA TODAY NEWSPAPER)

At least 11 wild elephants died after plunging from a waterfall in a national park in Thailand, wildlife officials said Tuesday.

The animals were found at Haew Narok – Ravine of Hell – waterfall in Khao Yai National Park.

Park officials said five adult elephants and a calf were found at the waterfall Saturday. Officials said the baby elephant drowned and the five adults, found in a ravine below the baby, fell trying to reach it.

The five additional elephants confirmed Tuesday were from the same herd, and only two elephants from the herd survived the incident, said Nattapong Sirichanam, governor of Nakhon Nayok province, according to Reuters.

The two surviving elephants had been trapped on a cliff above the baby elephant, park officials said.

A similar incident killed eight elephants at the same waterfall in 1992, and Sompote said the 11th death is the highest number of elephants to die in a single incident in Khao Yai.

According to Reuters, 3,500 to 3,700 wild elephants remain in Thailand. The park is home to about 300 elephants, the news agency reported.

Asian elephants are classified as endangered by the International Union for the Conservation of Nature.

The surviving elephants will probably experience grief. When two elephants died this year at an Indianapolis zoo, officials confirmed that the rest of the herd reacted emotionally.

3 Stunning Palaces You Should See

More often than not the homes of emperors, heads of states, monarchs and other important dignitaries, palaces, are some of the world’s most spectacular works of architecture. Here’s three magnificent examples that you should definitely see in your lifetime. While the dignitaries may not reside there anymore, you can still experience the opulent lifestyles they once lived.

Perched on a hilltop above the Andalusian city of Granada, the Alhambra is among Spain’s most exquisite Islamic monuments. Designed by the Nasrid sultans and built in the 1400s, it blends a fortress with Moorish palaces and landscaped gardens. Once the royal palace of Yusuf I, Sultan of Granada, it became the royal court of Ferdinand II of Aragon and Isabella I in 1492 and was later redeveloped by kings Charles I, Charles V and Philip V. Today this UNESCO-protected monument welcomes over 8,000 visitors on a daily basis.

With so much to see and understand it could be worth booking a guided tour of the Alhambra. There’s the exquisite Moorish-style courtyards and living quarters of the Nasrid Palaces. See the Renaissance Palace of Charles V, home to the thematic exhibitions of the Museum of the Alhambra. Inside the ruins of the Alcazaba citadel, the Torre de la Vela watchtower offers sublime views of Granada and the Sierra Nevada mountains. Wander amid the gardens of the Generalife summer palace, complete with Baroque courtyards, flowerbeds, fountains and ponds.

Plan your visit to the Alhambra.

Blending medieval designs with classical Renaissance features, the Château de Chambord is arguably the finest example of French Renaissance architecture on the planet. King François I established the chateau in 1519 as a hunting lodge in the Loire Valley; however, he only stayed here for about 40 days. All-but abandoned for over a century, it wasn’t until the reign of Louis XIV that construction was completed. The sumptuous royal residence features over 400 rooms and 282 fireplaces. Of its 84 staircases, the double-helix staircase was allegedly inspired by Leonardo da Vinci.

Over 60 rooms are open to the public, spread throughout which is a permanent exhibition of 4,500 artifacts and art pieces. Don’t miss the bedchambers, 18th-century kitchens and vaults. The double helix staircase leads to the rooftop and a panoramic view of the cupolas, domes, turrets and surrounding woodland. Drive an electric boat around the chateau’s canal, watch a bird of prey show and attend a joust. Explore the formal gardens along 14 miles of trails on foot, by bike and via horse-drawn carriage rides.

Plan your visit to the Château de Chambord.

One of Bangkok’s most recognizable landmarks dates back to 1782, when King Rama I made the city Thailand’s capital and built his royal residence. Until 1925 The Grand Palace was the home of the Thai monarch, the royal court and government. Today it is a location for royal ceremonies, a place of worship and popular tourist attraction. The walled palace sits on the banks of the Chao Phraya River with a majestic fusion of Thai, Asian and European architectural styles.

Follow monks in red-colored robes to the Temple of the Emerald Buddha (Wat Phra Kaew), where worshippers pray at a revered Buddha statue. See opulent royal thrones in the Amarind Hall and Dusit Maha Prasat audience hall. The Boromabiman Hall displays French influences and the Chakri Maha Prasat Hall is a neoclassical royal residence. Don’t miss the model of Cambodia’s Angkor Wat, the imposing Demon Guardians and the statue of Cheewok Komaraphat, who was the father of Thai herbal medicine.