Pelosi warns: ‘Civilization as we know it today is at stake’ in 2020 election

Washington (CNN)House Speaker Nancy Pelosi said on Thursday that “civilization as we know it today is at stake” in the 2020 presidential election, saying that she does not want to “contemplate” the possibility that President Donald Trump could be elected to serve as second term in office.

“Let’s not even contemplate that,” Pelosi said at a CNN town hall Thursday evening in response to an audience question about what checks will exist in the House of Representatives if Trump is reelected and the impeachment process is over.
“Civilization as we know it today is at stake in the next election, and certainly our planet,” Pelosi said.
Pelosi’s participation at the town hall event came on the same day that she announced that the House will take the momentous step of moving forward with articles of impeachment against Trump. That announcement adds a new level of intensity to the impeachment effort and likely paves the way for Trump to become the third President in US history to be impeached.
Pelosi called her decision “quite historic” during a CNN town hall moderated by Jake Tapper.
In response to an audience question, she said, “I have to admit that today was quite historic. It was taking us, crossing a threshold on this that we just had no choice. I do hope that it would be remembered in a way that honors the vision of our founders, what they had in mind for establishing a democracy.”

Pelosi, who is guiding House Democratic caucus through the impeachment process as the top Democrat in the chamber, sidestepped a question whether she would step aside if a Democrat wins the White House in 2020.
“I’m not on a timetable, I’m on a mission,” Pelosi said, an answer that met with applause from the audience.
As House Democrats grapple now with how to draft articles of impeachment, Pelosi said during the town hall that Democrats are working “collectively” on determining what will be included in the articles.
Asked by Tapper whether she would proceed if Judiciary Chairman Jerry Nadler recommends including obstruction of justice charges from special counsel Robert Mueller’s report, Pelosi said, “We’re operating collectively. It’s not going to be — somebody puts something on the table. We have our own, shall we say, communication with each other.” 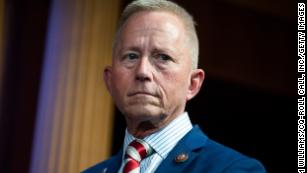 House Democrat says he plans to vote against all articles of impeachment
Pelosi declined to go further. “We’re not writing the articles of impeachment here tonight.”
Articles have not been finalized, but Democrats are now signaling that the articles of impeachment could go beyond the scope of the Ukraine investigation that has dominated Washington for the past two months.
Whether to include Mueller’s findings of obstruction of justice has been debated internally for weeks as some moderate Democrats only got behind an impeachment inquiry because it was narrowly focused on Ukraine.
Pelosi took aim at Trump’s lawyer Rudy Giuliani during the town hall when asked about his continued efforts in Ukraine as Democrats move forward with their impeachment inquiry.
“I’m a busy person,” Pelosi said, “I don’t have time to keep track of Rudy Giuliani, I just don’t, but I do think that it is further indication of the arrogance of it all.”

During the town hall, Pelosi also explained why she had reacted so strongly to a reporter who asked her if she hates President Donald Trump, calling the question “really disgusting.”
Asked by Tapper during a CNN town hall about her reaction during her weekly press conference to the question, Pelosi cited her Catholic upbringing and responded, “The word hate is a terrible word … so for him to say that was really disgusting to me.”
The California Democrat added, “I’d rather like to think that America is a country that is full of love, whatever we think about what somebody else might believe that might be different from us, that that isn’t a reason to dislike somebody. It’s a reason to disagree with somebody.”
Pelosi issued a stark warning to the reporter from Sinclair who had asked her the question, responding forcefully, “Don’t mess with me” — a sign of the tension amid the House of Representatives’ impeachment push.
During CNN’s town hall, Pelosi questioned whether the person who asked the question is actually a reporter, saying, “Was that a reporter? Is that what reporters do?” when Tapper asked about the exchange.

‘I don’t think we’re headed for a shutdown’

Pelosi also predicted during Thursday’s town hall that there will not be a government shutdown later this month.
“I don’t think we’re headed for a shutdown. I don’t think anybody wants that,” Pelosi said.
“We’re on a good path, if we were not, we would just go to a continuing resolution until after Christmas,” Pelosi said, referring to a stop-gap measure to keep funding in place.
Lawmakers will need to take action to avert a government shutdown before the end of the month, making the month even busier in Congress as the impeachment inquiry dominates headlines in Washington.
The President’s contacts with Ukraine are at the heart of the impeachment inquiry and investigators have focused on probing the now-famous July 25 phone call where Trump asked the President of Ukraine for a “favor” and pushed for investigations into the family of a potential political rival, former Vice President and Democratic presidential candidate Joe Biden.
The President has argued that the call was “perfect,” and congressional Republicans have defended the President and his administration, saying that Trump did not commit an impeachable offense.
This story has been updated with additional developments Thursday.

CNN’s Jeremy Herb and Caroline Kelly contributed to this report.