Iraq is at war again, but this time with itself.

Security forces have repeatedly turned their weapons on fellow Iraqis this past week, killing at least 91, and wounding more than 2,000, as of Saturday.

This past week, tens of thousands of people have taken to the streets in Baghdad and across southern Iraq to protest widespread government corruption, unemployment and a lack of basic services such as electricity.

The Iraqi authorities lifted a multi-day curfew in Baghdad on Saturday that many anti-government protesters had ignored. Parliament was set to meet to discuss protesters’ demands, while senior Iraqi officials, including the prime minister and Parliament speaker, were set to meet with protesters.

The harsh response by the security services suggested, however, that they had been given leeway by the leadership to take any steps necessary to halt the protests, signaling how ill-prepared the government was to respond to the demands of its own citizens.

It was also a reminder that Iraq, which never experienced an Arab Spring-like rebellion with people pouring into the streets, had security forces that were trained to deal with terrorism but were a loss to find less lethal ways to control crowds.

“I came out to the streets to ask for reform in my country and to find salvation from the mafias who have stolen my country and was greeted brutally by the security forces,” said Ibrahim Ahmed Yusuf, 34, who was wounded in the neck while demonstrating in Tahrir Square in Baghdad.

“We are peaceful protesters, but the security forces treated us with brutality, as if we were animals, not humans demanding our rights,” he said.

There have been protests in Iraq before, and some seemed more violent, including those in 2016, when crowds entered the Parliament and demanded an end to corruption, which is a core demand of the protesters now. This time, however, the protests have come with a broader and deeper sense of the government’s incompetence, and draw support from Iraqi youth, intellectuals and educated people, as well as from some political parties trying to make the most of it.

Many Iraqis are jobless, and despite the end of the largest part of the fight against the Islamic State, as well as the government’s increased oil revenues, little money is being put into jobs programs or improving services, at least not enough that people feel a significant difference in their daily lives.

Iraqis are continuing to protest despite a more violent, at times deadly, response on the part of the security forces, who in some cases have been firing directly at the protesters rather than into the air to disperse them, according to multiple reports from protesters. This itself suggests desperation, even a willingness to risk everything.

“This reflects a broad realization that the system is incapable of reforming itself,” said Randa Slim, a senior fellow and director of conflict resolution at the Middle East Institute.

“But then what is the path forward?” said Ms. Slim, who was in Iraq recently to meet with people from different backgrounds and political orientations. “I don’t think anyone has a clue.”

What Does Having a Boyfriend Have to Do With Sleep? 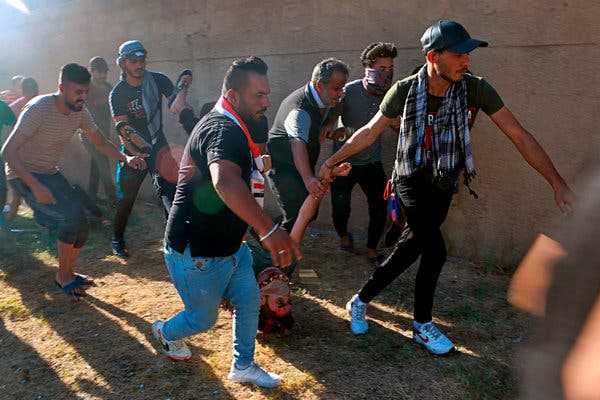 The protests, which began on Oct. 1, seemed to come out of nowhere, but were apparently sparked by a recent, disturbing political event: the removal in September of a highly respected general, Abdul-Wahab Al-Saadi, from the leadership of the counter-terrorism command.

General Al-Saadi, who was widely believed to have done a good job in fighting the Islamic State, especially on the difficult battlefields of Mosul and Falluja, was peremptorily removed from his job and assigned to the ministry of defense.

General Al-Saadi’s profile — he is a Shiite but not aligned with any party — made him something of an Every-man soldier-hero. His dismissal was explained on the street as linked to his lack of corruption, in contrast to other senior figures, and his refusal to kowtow to the Popular Mobilization Forces, military entities within the Iraqi security forces, some of which have links to Iran.

Whether people knew General Al-Saadi was less important than what he stood for, said Abbas Kadhim, the director of the Iraq Initiative and a senior fellow at the Atlantic Council who was visiting southern Iraq when demonstrations started.

“This was just a spark that unleashed all built-up grievances,” he said.

“Many of the grievances are not about Adil Abdul-Mahdi’s government,” he added, referring to the prime minister of Iraq. “But when you are the prime minister, you have to pay for your mistakes and those of previous leaders.”

It was unclear whether these were shadowy entities within the Iraqi security establishment or elements linked to political parties or to neighboring countries seeking to promote instability in Iraq.

Caught off guard by the demonstrators, the government at first met the protesters’ anger with silence, allowing repressive actions by the security forces to dominate the narrative. The prime minister, Mr. Mahdi, put a curfew in place, shut down the internet and called in additional police forces. Then he made a brief statement that backed up the security forces.

Only on Friday — as criticism rained down from the senior Shiite clerics, the United Nations and rights groups, and the repression seemed to have little effect — did the government began to reach out to those among the demonstrators whom they called the “peace protesters.”

The Parliament speaker, Mohammed Al-Halbousi, invited representatives of the protesters to meet with him, offering a laundry list of concessions. Mr. Mahdi also was planning to meet with protesters on Saturday.

The problem is that political parties now smell blood and believe they can topple Mr. Abdul-Mahdi and gain ground for themselves. Already, the leaders of two sizable political parties, Sairoon and Al Hikma, openly criticized the government and called for reform. The former is led by Moktada al-Sadr, the nationalist Shiite cleric who has been a thorn in the side of whoever has been in charge in Iraqi since 2003.

Mr. al-Sadr called for his bloc to stop participation in the Parliament and for the government to resign. If he decides to call his followers to the streets, he has broad influence in Sadr City, a sprawling, largely poor neighborhood of Baghdad that is home to more than a million people, as well as in Iraq’s second largest city, Basra, and elsewhere in southern Iraq.

Unlike the 2016 protests, when many participants were followers of the cleric, these protests include a cross-section of Iraqis, many without ties to political parties.

Different provinces have different demands, however. The disparate goals that drove people into the streets mean that, at least for now, there are no clear leaders to negotiate on behalf of the aggrieved.

A version of this article appears in print on Oct. 6, 2019, Section A, Page 4 of the New York edition with the headline: Iraqi Security Forces Kill Dozens in Week of Protest. Order Reprints | Today’s Paper | Subscribe