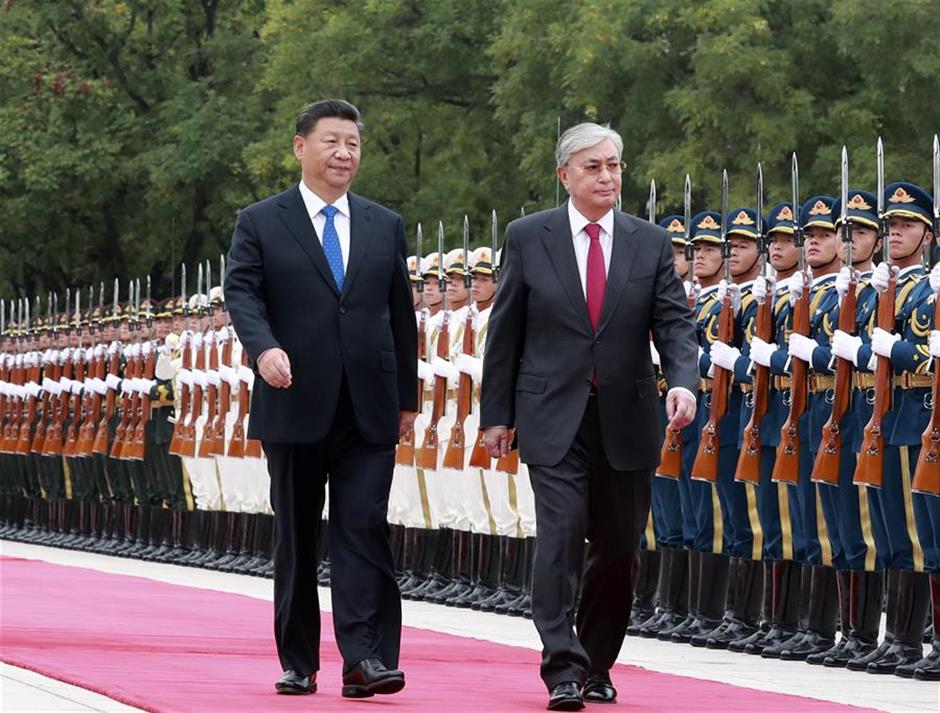 Chinese President Xi Jinping holds a welcoming ceremony for visiting Kazakh President Kassym-Jomart Tokayev before their talks at the Great Hall of the People in Beijing, capital of China, September 11, 2019.

The decision came as Chinese President Xi Jinping held talks with his Kazakh counterpart, Kassym-Jomart Tokayev, at the Great Hall of the People in Beijing.

When reviewing the achievements the People’s Republic of China has scored in the past 70 years since it was founded, Xi said such a process of moving forward has never been smooth, and stressed that no matter how the external situation changes, China will unswerving take care of its own business regardless of outside factors.

“We are fully capable of coping with various risks and challenges, and any difficulty or obstacle cannot stop us from moving forward,” Xi said.

“A stable, open and prosperous China will always be an opportunity for the future development of the world,” he said.

He also called on the two sides to boost cooperation in industrial capacity and science and technology innovation, increase people-to-people and cultural contacts, and facilitate exchanges at sub-national level.

China and Kazakhstan should take a clear-cut stand in upholding multilateral-ism and an open world economy, so as to contribute to promoting a fairer, more just and equitable global governance system, Xi said.

Xi also encouraged the two countries to strengthen security cooperation, and jointly fight against the “three evil forces” of terrorism, extremism and separatism.

It is necessary to promote the Shanghai Cooperation Organization (SCO) to play a more active role in regional and international affairs, he added.

Tokayev, who is paying a state visit to China from Tuesday to Thursday, expressed congratulations on the 70th anniversary of the founding of the People’s Republic of China.

Tokayev said Kazakhstan is willing to take the decision of developing a permanent comprehensive strategic partnership with China as an opportunity to promote closer bilateral ties.

China’s reform and opening-up has brought opportunities to various countries including Kazakhstan. Kazakhstan firmly supports the Chinese government and people in safeguarding national sovereignty, security and development interests, he said.

Tokayev said Kazakhstan is looking forward to cementing high-level exchanges with China, and strengthening pragmatic cooperation in the areas of economy, trade, infrastructure, energy, 5G, science and technology, and people-to-people and cultural exchanges under the framework of the Belt and Road initiative.

Tokayev said the two sides should closely communicate and coordinate within the frameworks of the SCO and the Conference on Interaction and Confidence Building Measures in Asia, jointly combat the “three evil forces,” and maintain regional security while opposing external interference.

The two heads of state signed a joint statement between China and Kazakhstan after their talks. They also attended a signing ceremony for a number of bilateral cooperation agreements.

Before their talks, Xi hosted a welcome ceremony for Tokayev outside the Great Hall of the People.