(THIS ARTICLE IS COURTESY OF VOX.COM)

Benjamin Netanyahu’s plan to annex a massive part of the West Bank, explained

Israel’s prime minister wants to seize the Jordan Valley — a move that would bury the two-state solution for good.

In a high-profile speech on Tuesday, Israeli Prime Minister Benjamin Netanyahu promised to annex a part of the West Bank called the Jordan Valley if he wins Israel’s upcoming election on September 17.

“If I am elected I commit to annex the Jordan Valley. It is our eastern border, our defense wall,” the prime minister vowed. “Give me the mandate. No previous Israeli prime minister has proposed doing so.”

The annexation is billed as a security measure, an essential move for Israeli to protect its heartland. In practice, though, it would mean seizing land that’s vital to any future Palestinian state’s success — effectively dismantling the peace process. It’s a truly radical pronouncement, a blaring statement that this Israeli government has no interest in a serious negotiated peace with the Palestinians.

Annexation is not inevitable. Netanyahu might lose the election, or he might end up with a parliamentary coalition that would block his move. The speech was clearly designed to shore up Netanyahu’s support in the upcoming elections (particularly with right-wing voters).

But just because the promise is campaign rhetoric doesn’t mean it’s empty. Experts warn that the very act of putting annexation on the table will shift Israeli politics even further to the right, potentially scuppering the peace process for good.

“Instead of a conversation on whether annexation is smart or stupid, bad for Israel or good for Israel, everyone across the Israeli political spectrum will accept this new baseline and annexation becomes normal,” writes Michael Koplow, policy director at the center-left Israel Policy Forum. “As it is, the gap between Israel and the Palestinians is wide and widening by the day. This makes that gap unbridgeable if it becomes the new Israeli baseline position.”

Why annexation is so scary for the peace process

The Jordan Valley runs along the east edge of the West Bank, the heavily Palestinian-populated area taken by Israel in the 1967 war, marking its boundary with neighboring Jordan. It contains both Palestinian population centers, like the city of Jericho, and a number of Israeli settlements.

Netanyahu claimed in his speech that he would not be “annexing even one Palestinian.” To do that, he exempted Jericho and nearby Palestinian villages from the annexation proposal, opting instead to encircle them (the red blob in the map below) with newly taken Israeli land (the much bigger blue chunk):

Here’s the map of the territory of the Jordan Valley, in the West Bank, that Netanyahu vowed to annex if he wins next week’s election (blue: will be annexed to Israel; orange: will remain under Palestinian control) 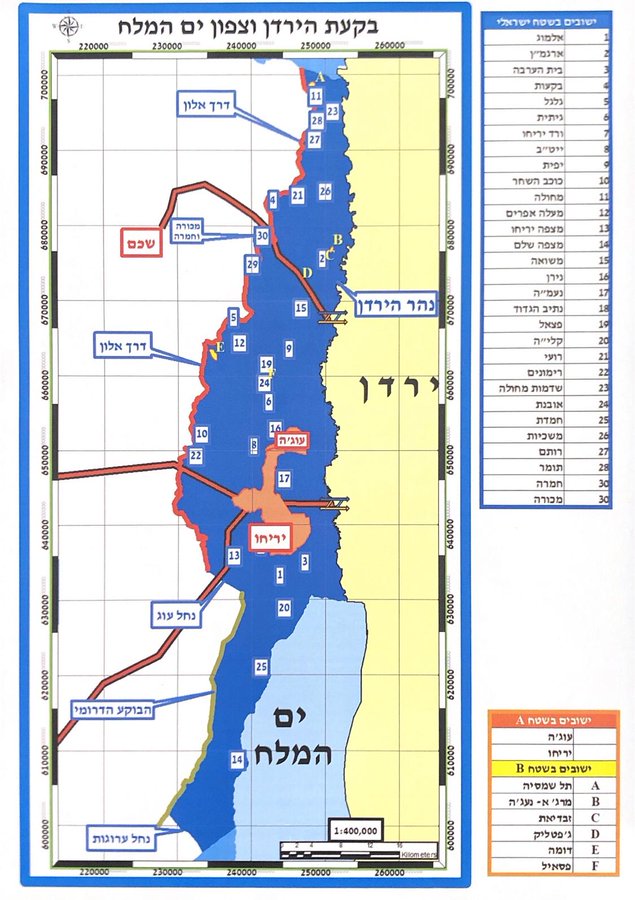 478 people are talking about this

The most credible argument for Israel formally seizing control of this land is essentially strategic. Israel has faced invasions from Jordan before, and an IDF military presence in the Jordan Valley is arguably vital to protecting Israel from another hypothetical invasion in the future.

However, there is no imminent risk of such an invasion to justify an immediate land grab. And there are lots of arrangements by which Israel could protect legitimate security interests in the Jordan Valley without outright seizing the land. It could station some troops there with permission from a Palestinian state, for example.

Annexing the Jordan Valley at this particular moment is not a response to an urgent security threat. Rather, it a dagger blow to the idea of a two-state solution, amounting to a declaration that Israel is not interested in creating a Palestinian state but rather simply taking the land that it wants for itself.

“Annexation — taking land while continuing to subjugate the Palestinians on that land — is apartheid and should face the same consequences,” says Diana Buttu, a Ramallah-based political analyst and former adviser to Palestinian President Mahmoud Abbas.

This unilateral land grab of a huge chunk of the West Bank would shrink the remaining Palestinian territory to such an extent that most observers believe it would render the very idea of a two-state solution impossible.

“Netanyahu is proposing annexing essentially a third of the West Bank,” writes Raf Sanchez, a Middle East correspondent at the UK’s Telegraph newspaper. “Very hard to see how anyone can say a Palestinian state is still possible if that happens.”

If that’s the case, then Netanyahu’s land grab would force Israel down one of two dangerous one-state paths.

One option would be giving the vote to Palestinians and making them full citizens of Israel, leading to an Arab demographic majority and thus ending Israel’s status as a Jewish state. This is not only a recipe for violence between Muslims and Jews but also unacceptable to the currently ascendant Israeli political right, of which Netanyahu is very much a part. The other option is indefinite Israeli rule over Palestinians without granting them citizenship. There’s a word for keeping an ethnically defined part of your population in permanent second-class citizenship: apartheid.

Before we go down the doomsday road, though, it’s worth noting that annexation is not happening tomorrow — and may not be happening at all.

The polling for the September 17 election is ambiguous. The leading opposition party, centrist Blue and White, is polling ever so slightly ahead of Netanyahu’s right-wing Likud, but neither party is projected to come close to a parliamentary majority. Whoever comes out ahead will depend on a coalition agreement with a group of smaller parties, and it’s not at all clear what the most likely coalition will be come next week. It’s possible Netanyahu is out of a job or stuck with some kind of coalition that won’t let him pursue annexation.

What’s more, Netanyahu is currently battling indictment on corruption charges. The amount of attention and energy this fight will consume might, according to some Israeli observers, make it impossible for him to actually take the radical step he just proposed.

“If Netanyahu wins next Tuesday, and that’s a big ‘if,’ he will be spending all his time trying to tailor his immunity from prosecution. Not annexing the Jordan Valley,” writes Anshel Pfeffer, a columnist at Israel’s left-wing Ha’aretz newspaper. “If Netanyahu’s statement proves anything, it’s his contempt for his own right-wing voters’ intelligence. They are expected to believe that after all this time, the ‘historic opportunity’ to annex the Jordan Valley is suddenly just a week before the election.”

But just because annexation may not be imminent doesn’t mean the talk of it isn’t dangerous.

The basic concern here is that Netanyahu is changing the terms of Israeli politics. If he proposes it and gets even tacit permission from the Trump administration — which has yet to condemn the proposal — then expectations of what Israel can get from the Palestinians will be profoundly reset.

“What happens now is that Bibi says he will take a step that is important to Israeli security, probably get Trump administration backing, get most Israeli parties to support — or at least not to oppose — it,” writes Koplow. “This is precisely how the fundamental window on this shifts.”

If this comes to pass, then annexation is likely to happen one way or another. And if it does, the peace process will be well and truly dead.

“Yes you can argue that it’s an electoral ploy,” writes Brent Sasley, an expert on the Israeli-Palestinian peace process at the University of Texas at Arlington. “But he’s been moving the goalposts of annexation every year and an outright public commitment to it is a major step forward.”